Chocolate is a perfect food, as wholesome as it is delicious, a beneficent restorer of exhausted power…

For centuries, chocolate has been a reliable delight, a “perfect food” that today supports a $117B industry.2 Our love of chocolate drives us to consume over 3 million tons of cocoa beans each year, and demand is expected to grow 30% by 2020 as emerging markets embrace the treat.3,4

Despite the global obsession, the future of chocolate is unclear. Anticipated shifts in global temperatures and precipitation raise the question of whether cocoa supply can support demand, or if climate change threatens one of the world’s most beloved indulgences. To investigate these concerns, the International Center for Tropical Agriculture (CIAT) conducted a study of cocoa farmland in Ghana and Cote d’Ivoire, two countries that collectively produce 50-60% of the world’s cocoa. The results were sobering: In less than 20 years, temperature increases will reduce the suitability of almost all cocoa farmland in these areas.5,a By 2050, the cumulative temperature increase of 2.3°C “could send [cocoa pod] yields crashing and prices soaring,” according to Peter Laderach, the lead author of the study.6 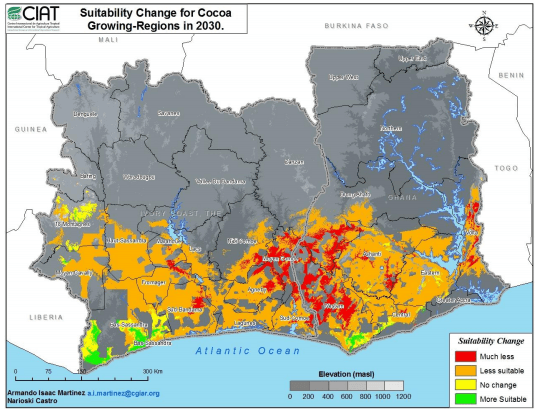 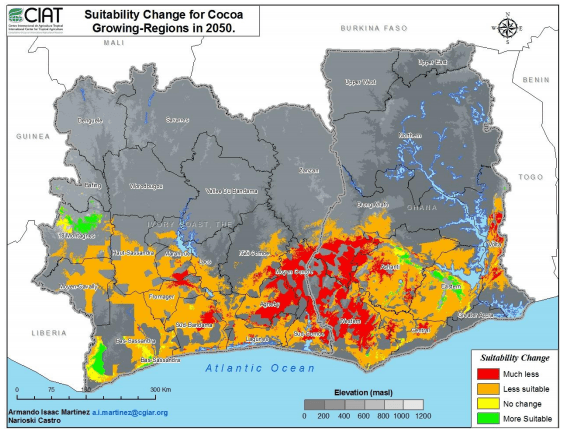 For major chocolate manufacturers such as Nestle, Ferrero, Meiji, or Lindt & Sprüngli, the threat of insufficient cocoa supply is no small matter, and how to prevent a shortfall is the $117 billion- question. The enormity of the challenge is only exacerbated by the fact that cocoa farming is extremely fragmented; 80-90% of cocoa is produced by small, family farms of 5-10 acres apiece.3 In an industry divided into 5-6 million farms, most of which do not have significant resources to invest in innovation, it is difficult to develop a unified effort to combat the effects of climate change. 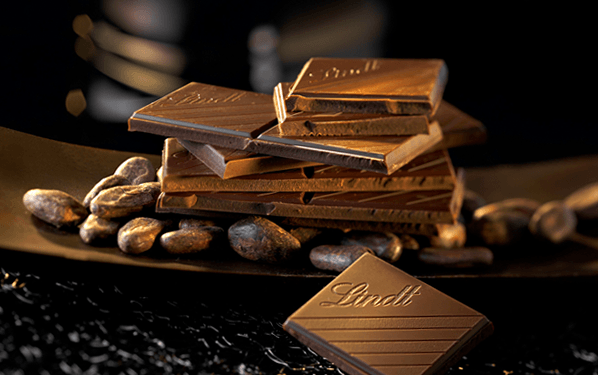 In order to activate and unite efforts across farms, Lindt & Sprüngli (owners of globally-recognized brand Lindt as well as other chocolate brands such as Ghirardelli, Russel Stover, and Hofbauer) have established a Farming Program to communicate, amongst other topics, sustainable farming practices to over 45,000 cocoa farmers.7 For example, Lindt & Sprüngli have explicitly laid out requirements for Ghanaian farmers in its supply chain, with compliance verified through farm visits.8 On top of this, the company requires all of its suppliers to comply with its “Supplier Code of Conduct”, which explicitly states that suppliers must “strive to minimize their greenhouse gas emissions” and “minimize disposal of solid waste, wastewater and other emissions to prevent pollution…”9

While working with cocoa farmers is an important step, Lindt & Sprüngli has also instituted changes within its own operations to reduce its carbon footprint. Initiatives have included shifting electricity sources to a higher share of renewable electricity, funneling waste heat back into the system for use in heating and dehumidifying, and the use of LED lighting. Lindt & Sprüngli has also shifted transportation of goods from trucks to rail, which can reduce the company’s CO2 output by 807 tons in a single year alone. The results of such initiatives on CO2 emissions, and water and energy consumption are shown below.10

Despite these efforts, the fragmentation of the cocoa supply chain still poses an obstacle to real progress. It is unlikely that cocoa farms will be able to innovate and implement change that will make an impact without pooled resources and commitment. However, Lindt & Sprüngli have joined a public-private partnership facilitated by the World Cocoa Foundation that includes collaboration with CIAT as well as Nestle, Mars, Cargill, and other major industry contributors. The focus of the partnership is to develop solutions to address the threat of climate change to the long-term viability of the cocoa industry. According to CIAT’s Mark Lundy, “This new initiative is critical because it inserts solid climate projections for cocoa into private sector decision-making processes, allows for dialogues with public agencies and donors, and prioritizes collective investment plans to ensure a resilient cocoa sector that benefits farmers, companies and consumers into the future.”11

This partnership was announced in May of this year, and it remains to be seen to what extent Lindt & Sprüngli and other major chocolate players will work together to solve this problem. Going forward, the cocoa industry will likely require agricultural innovation that will need to be funded by major players and disseminated at scale. Should this initiative fail to effect that level of scaled change, the small, independent efforts of separate farmers or even separate chocolate companies will likely not have the necessary impact to ensure everyone can satisfy their craving for the “perfect food.”

[a]   It should be noted that as temperature increases, some areas that had previously been too cold to grow cocoa may shift to a suitable temperature. If this did occur, however, it does not imply a net negligible effect on the system. In such a scenario, farmers who had previously produced chocolate would need to identify another crop to sustain themselves, while chocolate manufacturers would need to identify farmers in new cocoa-suitable areas who would be willing to shift to cocoa farming. On top of the impact to farmers, it is likely that the newly suitable land will not be existing farmland. In that case, deforestation would be required in order to accommodate the cocoa “migration,” with affected countries likely including Liberia and Cameroon. Significant uncertainty surrounds the impact of such activities, as well as whether the system could absorb the anticipated increase in cocoa demand alongside these threats to its supply chain.12

[1] Justus von Leibig, qtd. in Cocoa and Chocolate: A Short History of Their Production and Use by James McKellar Bugbee of the Walter Baker & Company (Applewood Books, 1886).

[2] “A Taste of the Future”, KPMG, June 2014. Accessed 11/3/2016. https://www.kpmg.com/Global/en/IssuesAndInsights/ArticlesPublications/Documents/taste-of-the-future.pdf

[5] Predicting the Impact of Climate Change on the Cocoa-growing Regions in Ghana and Cote d’Ivoire, International Center for Tropical Agriculture, Sept. 2011. Accessed 10/30/2016. http://dapa.ciat.cgiar.org/wp-content/uploads/2011/09/ghana_ivory_coast_climate_change_and_cocoa.pdf

Fighting the Good Fight – Is Solar City Too Dependent on Regulation?