Barry Callebaut isn’t a household name, but odds are one of its products will flash through your mind when you’re craving a treat. Founded in the mid-1850s, Barry Callebaut is today the largest processor of cocoa and chocolate in the world, accounting for over 25% of the world’s production.[1] As the industry’s largest player, Barry Callebaut focuses on sourcing the best-quality cocoa beans and processing them for use by the likes of Nestlé and Mondelez.[2] The only step in the chocolate supply chain Barry Callebaut does not actively engage in is cocoa farming itself.

Even with a relatively efficient manufacturing footprint, Barry Callebaut is still far from immune to the adverse effects of climate change. Like many other companies exposed to natural commodities, much of Barry Callebaut’s success rests on its ability to reliably source its primary raw material, cocoa beans, at a financially viable price. Unlike many others, however, Barry Callebaut must constantly manage acute supply constraints given the complexities of cocoa farming within the thin, tropical strip around the equator that can support cocoa trees.[3] More than 70% of the world’s cocoa originates from small, family-operated farms in west Africa, and attempts to scale up cocoa production in other countries along the equator have been slow-going, particularly in light of the environmental hazards of deforestation.[4] Like all other players, Barry Callebaut sources the vast majority of its cocoa from west Africa. 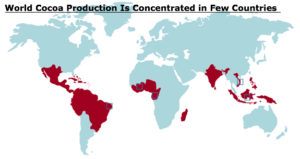 Changing weather patterns have already begun to have a material impact on annual production of cocoa across this key growing region. Farmers in Ghana and Ivory Coast, together representing over half of the world’s production, have reported that a meaningful increase in the variability of temperatures and rainfall in recent years has translated into much greater volatility in crop yields.[5] This volatility has, in turn, greatly impacted global cocoa prices, which have experienced swings of 20% or more in four of the last ten years and increased over 100% on a cumulative basis from 2006 to 2015.[6] Considering long-term trends, the Center for Tropical Agriculture estimates that rising global temperatures may render much of Ghana’s current cocoa-producing region unsuitable for the crop by 2030.[7]

In this context, Barry Callebaut faces a very serious threat given the concentrated and very delicate nature of the supply of its key raw material. The past few years of volatility have underscored this issue, and company management has recognized that Barry Callebaut’s success is ultimately intertwined with that of the individual cocoa farmers that supply it. As such, the company has made significant strides to strengthen its link to farmers and farm cooperatives in west Africa. Whereas the company traditionally relied heavily on purchasing through trading houses, today it purchases over two-thirds of its raw cocoa directly from farms in origin countries.[8] In addition, the company has invested heavily in programs that help train over 77,000 farmers in yield improvement techniques and offer many access to financing to reinvest in their farms. To generate new methods for improving yields further, Barry Callebaut has also opened a flagship R&D center in Indonesia that can run tests on up to one million seedlings per year.[9]

Barry Callebaut’s dual focus on increasing cocoa yields and improving farmers’ financial health represents the core of its effort to promote sustainability throughout its supply chain. In the face of increasing instability, the company’s aim is to boost each farmer’s baseline level of production, while also reducing the risk that unexpected adverse weather events will put farmers out of business. Indeed, there is considerable room for yield optimization in west Africa, where average yields are 350-400 kilograms per hectare versus a potential maximum of 1,500 kilograms.[10] Early yield improvement efforts have focused on straightforward techniques like proper fertilizer application and pruning, and have shown promising results.

Going forward, it will be important for Barry Callebaut to continue to build its partnership with farmers and help develop buffers, both operational and financial, against the increased volatility brought on by climate change. Looking beyond Africa, I believe the company should proactively foster similar relationships with farmers in other countries like Indonesia and Brazil that are ramping up cocoa farming in a sustainable way. Ultimately, geographic diversification will allow the company to mitigate the risk that adverse weather patterns could disrupt its current supply from Africa. Finally, given Barry Callebaut’s market leadership, I believe the company is uniquely positioned to collaborate with companies more specialized in crop science to intensify its R&D efforts and develop tailored solutions like drought-resistant cocoa strains. Leveraging its farmer relationships, Barry Callebaut can also be instrumental in bringing these advancements to market in a way that benefits all parties involved.

[7] Center for Tropical Agriculture (CIAT). Predicting the Impact of Climate Change on the Cocoa-Growing Regions in Ghana and Cote d’Ivoire. http://www.eenews.net/assets/2011/10/03/document_cw_01.pdf, accessed November 2016.

A longer-term view on saving lives

Student comments on Chocolate Challenged at the Origin