Climate change has long been a focal point on the world’s stage. Dating back to 1987, after the discovery of a large hole in the Earth’s ozone layer, the Montreal Protocol was designed to curb the impact of harmful substances, most notably chlorofluorocarbons (CFCs), on the environment. Even though CFCs were widely used in air-conditioning and refrigeration applications, they were found to be harmful contributors to the depletion of the ozone layer, which protects the earth from sun’s ultravioulet rays.1 The protocol helped to eliminate emissions from more than 100 fluorinated gases, and as a result the ozone hole is slowly recovering.2 Some regard it as one of the most successful environmental treaties ever.

In response to the banning of CFCs, chemical companies developed hydrofluorocarbons (HFCs) to replace them. While HFCs pose no threat to the ozone layer, they are super greenhouse gas emitters and trap heat in the atmosphere. In fact, even though HFCs represent a small percentage of all greenhouse gasses, they have over 1,000 times the heat trapping power of carbon dioxide, which is a primary cause of global warming.3 Once again, a large problem developed over the years with the continued growth of the coolant and refrigeration markets producing high demand for HFCs and correspondingly a vast increase in resulting emissions.

On October 15, 2016, more than 170 nations reached an agreement to further address global climate change. The new Kigali amendment has one simple mission: to exclusively target the chemical coolants HFCs. The goal is to cut HFC emissions 85% by 2045 by rolling out a concrete timeline for the production freeze of HFCs in countries around the world.4 If successful, it will lead to the reduction of 70 billion equivalent tons of carbon dioxide from the atmosphere, or two times the annual global carbon pollution. Said differently, the Kigali agreement will prevent an atmospheric temperature increase of nearly one degree Fahrenheit, a significant amount considering it is believed that just a rise of 3.6 degrees will lead to an irreversible impact.3

Chemours is Ahead of the Curve

Surprisingly, the chemical company Chemours was one of the most active supporters of the Kiagali agreement even though it means the migration away from profitable HFC coolants that are the backbone of chemical supply to the fast-growing air conditioning and refrigeration segment.1 In anticipation of such regulation, Chemours has been on the forefront of innovation and set out over a decade ago to find refrigerants that not only didn’t erode the ozone layer but also were not major greenhouse gas emitters.4 Hundreds of millions of dollars were invested towards the development of hydrofluoroolefin (HFO)-based alternatives with low global warming potential (GWP).5 These new refrigerants are very close matches to the HFCs being replaced, providing customers with the solutions they need to meet the changing regulations within the industry at a minimal cost of transition.6 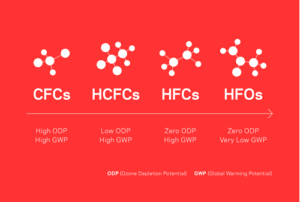 Chemours is well positioned in the fight against climate change. Use of their HFO-based chemicals is predicted to reduce carbon dioxide equivalent emissions from greenhouse gasses by 325 million tons by 2025.5 To provide one example, there are over a billion cars on the road using predominately HFC refrigerants. Chemours can directly target over 100 million cars that are newly produced each year since automakers globally are converting to use HFOs for new vehicle air conditioning systems. Chemours current predictions expect at least 24 million converted vehicles on the road by the end of 2016, with an estimated 50 million vehicles using HFO systems by the end of 2017.5 Ultimately, Chemours has positioned itself well to take advantage of the global climate change crisis. They are not only aiding the continent with environmentally conscious chemicals, but also stand to gain significant financial benefits as the adoption of HFOs increases over time. 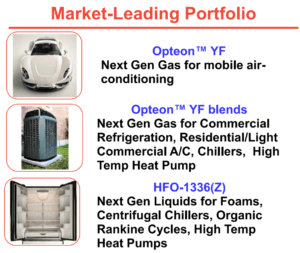 Figure 2: Chemours Portfolio of HFOs and their Applications

Accordingly, it is hard not to question whether the motivations of Chemours align with global warming prevention. On an objective basis, Chemours is providing its customers with solutions that meet the changing industry regulations. However, it must be noted that in the past year Chemours announced two major investments (with a magnitude of hundreds of millions of dollars) in large scale manufacturing plants to produce HFO refrigerants – signaling a strategic shift towards HFO production.7 Chemours and similar companies essentially pre-empted global climate change policy by developing HFOs, and then pushed for regulation that serves to grow the market. Taking into account their active role in supporting the Kigali agreement, is corporate financial motivation masking a possible downside of HFOs? Are HFOs the right solution, or will yet another adjustment be needed in the future?

Student comments on Chemours: How Chemicals are Helping to Cool Climate Change