In the realm of global commodities, we tend to think of oil, then everything else. I’d like to get you thinking about a commodity that’s even further off your radar, but may be an even more regular part of your daily life. We’re talking about cocoa.

Cocoa is the primary raw material in the production of chocolate candy, a $100 billion industry worldwide.(1) As a top 5 global producer of chocolate, the Hershey Company is very focused on managing and improving cocoa supply. Cocoa can be grown only in equatorial regions, and ~70% of global crop comes from West Africa, making the region almost solely responsible for serving an entire global industry.(2) West Africa is also one of the lesser developed regions in the world, and this characteristic applies to cocoa farming as well. Imagine people out in jungles in the blistering heat, holding machetes, and hacking down watermelon-sized beans that are hanging from trees. As Figure 1(3) shows, that’s the prevailing level of ‘technology’ in the cocoa industry.(4) In an environment where supply is underdeveloped and instable, and global chocolate demand is ever-growing(5), it’s no wonder that cocoa pricing has been both rising and volatile, as Figure 2 shows.(6) 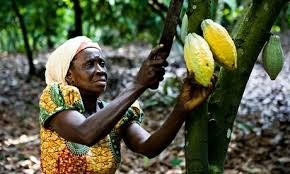 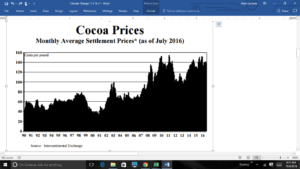 The slow and steady onslaught of climate change compounds an already challenging supply/demand equation in the cocoa industry. According to the International Center for Tropical Agriculture, as temperatures rise by ~2C through 2050 in the two largest cocoa growing countries, Ghana and Cote d’Ivoire, vast areas of cocoa farm land will become less productive, as Figure 3 shows.(7) The amount of land where cocoa grows optimally will consolidate in the fewer areas at higher altitudes, where temperatures will remain most conducive to cocoa tree growth. Additionally, the Intergovernmental Panel on Climate Change contends that those higher temperatures will not be accompanied by an increase in rainfall, leading to moisture loss and plant starvation.(8) Overall, 90% of the locations in Ghana and Cote d’Ivoire studied by the IPCC are expected to become less suitable for cocoa growing, and thus less productive.(7) 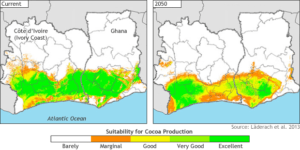 Cocoa processors(9) and chocolate candy manufacturers are already acting to improve the cocoa farming situation, particularly in the West African nations key to the industry. Hershey has committed to sourcing 100% of its cocoa from sustainable growers by 2020, meaning from farms that are certified by third party organizations to have the highest international standards for labor, environmental and farming practices. This will result in added annual expenses in Hershey’s P&L to the order of 9-digits, or greater than 1% of net sales. Alongside this commitment, Hershey directly invests in modernizing cocoa farming in the region. This modernization plan includes a variety of initiatives, such as working with growers locally to improve farming techniques, providing mobile phones to growers as sources of real-time information, and planting more cocoa trees.(10)

It’s unclear how effective these efforts, along with similar ones undertaken by Hershey’s peers, have been in meaningfully improving the cocoa farming situation. But in my opinion, what is very clear is that in the face of climate change, the current programs are simply not enough. The solution may just be as simple as committing more resources, also known as spending more money. The collection of small-time, individual growers that make up the cocoa farming industry do not have the resources to defend against the gigantic scope of climate change. Companies like Hershey, Mars and Mondelez have those resources. They can double down on their current initiatives, aimed at increasing farmland productivity and making the industry more attractive to potential new farmers. They can invest to modernize infrastructure, lowering the immense barriers and costs associated with collecting a highly disaggregated crop and transporting it across the globe. They can fund genetic research, aiming to create more resilient cocoa plants that will withstand the temperature test. Or they can invest in a combination of all three.

For a publicly-held and budget-driven corporation like Hershey, the thought of investing heavily in a project with no associated revenue growth and a 40+ year horizon is about as unappealing as they come. But whether through investment now or higher cocoa prices later, at some point Hershey will be forced to spend money on this issue. An organization taking the long-term approach would surely decide to increase investment now to allay the potentially catastrophic risks long-term. But color me skeptical. (730 words)

(4) The cocoa industry has also received significant media scrutiny for not promoting proper labor practices, including allowing child labor to happen under its watch. For the purposes of this post, I have decided not to touch on these issues, but a simple Google search will provide myriad results. (https://www.google.com/webhp?sourceid=chrome-instant&ion=1&espv=2&ie=UTF-8#q=cocoa%20labor)

(9) Cocoa processors purchase raw cocoa beans from farmers and process them into products such as cocoa powder and cocoa butter, which are then purchased by chocolate manufacturers as inputs to producing chocolate. Example companies include Barry Callebaut and Cargill.

Opportunity in the Drought: Aqua Capital Management and the Market for Tribal Water Rights

AXA: “the cost of climate change is too damn high!”