In recent years, the cruise industry has come under increased scrutiny for its detrimental impact on the environment. Specifically, government and non-profit agencies have targeted cruise operators for their contribution to greenhouse gas emissions. Given that annual passenger growth is expected to increase over the coming years, the effect will only continue to compound [1]. In response to growing public concern, the International Maritime Organization (IMO) introduced a new regulation in 2015 that requires cruise lines to use 0.1% low sulfur fuel while traveling through the Emissions Control Area (ECA) along North American coastlines [2]. The IMO initiative, intended to reduce Sulfur Oxide (SOx) and Particulate Matter (PM) emissions by 85%, could simultaneously increase fuel costs by 140% [2,3]. 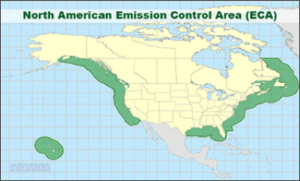 For some cruise operators, the added fuel expense may be enough to dissuade them from docking at ports within the North American ECA in favor of rerouting to zones with less stringent regulation. In order to comply with regulations within the ECA, cruise operators must incur the expense of switching to low sulfur fuel or alternatively, they may opt to install cleaning devices known as ‘scrubbers’ that extract sulfur from their ships’ exhaust. Carnival Corporation, the parent company of 10 major cruise line brands that account for nearly half of all global cruise passengers, chose to do both [4,5].

In early 2017, Carnival Corporation announced that it had invested $400M to date to develop original technology and install scrubbers on nearly 60% of its 100-ship fleet, with plans to achieve 85% by 2020 [6]. Once installed, the scrubbers effectively remove 99% of SOx emissions and 50% of PM emissions while allowing Carnival Corporation to continue using diesel fuel [4]. Additionally, to support long-term improvement, Carnival Corporation has ordered the construction of 7 ships that will run solely on Liquefied Natural Gas, both within the ECA and out at sea. The new vessels are designed to eliminate 100% of SOx emissions, reduce PM emissions by 95-100% and cut carbon emissions by 25% [4]. With recent diesel vessels costing more than $800M to build and natural gas vessels expected to require a 30% premium, this decision represents a substantial commitment to sustainability [7,8].

While Carnival Corporation has taken extensive measures to comply with Federal regulations around greenhouse gas emissions, the company has dedicated significantly fewer resources to improving the unregulated components of operation. Namely, the corporation’s targets for water and waste efficiency are paltry in comparison. Over the 10 years beginning in 2010, Carnival Corporation planned to reduce waste and increase water efficiency by only 5%, respectively [4]. Although waste and water management have received less scrutiny and overall attention from regulators, both aspects represent critical factors in the larger climate change ecosystem and should be addressed with the same level of urgency.

Several competitors, including Disney Cruise Line (DCL), have surpassed Carnival Corporation in this regard. For example, DCL has developed a process to convert cooking oil to fuel for cars and to harness excess heat from generators to make seawater drinkable [9]. By implementing more demanding efficiency goals across their fleet in the short-term, Carnival Corporation could effectively incentivize engineers to develop an innovative long-term solution for onboard operations. 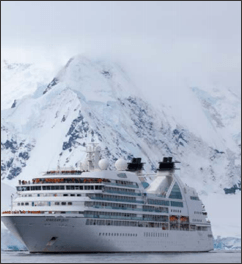 Though climate change has certainly created obstacles upstream for Carnival Corporation, there may be an opportunity to realize benefits downstream. Due to rising global temperatures, areas of the world that had previously been frozen are now accessible via recently thawed waterways. For example, in 2016 the Crystal Serenity was the first cruise line to traverse the Northwest Passage, selling staterooms onboard for as much as $120,000 [10]. As a result, cruise operators have the opportunity to recover some of the expenses caused by climate change by taking advantage of newly available, more lucrative routes.

Thus, the paradox of climate change as it applies to the cruise industry is such that cruise operators must bear the burden of increased regulation to minimize impact, but simultaneously are positioned to reap the reward of impact to date. The ability to balance these priorities, while communicating a compelling consumer narrative, will be the major challenge for Carnival Corporation as the conversation around climate change continues to evolve.

[7] “The Most Expensive Cruise Ships of All Time.” The Telegraph, 19 January 2017, http://www.telegraph.co.uk/travel/cruises/galleries/the-most-expensive-cruise-ships-of-all-time/.

A trillion-dollar industry is reinventing itself; Damco is leading the way

5 thoughts on “CARNIVAL CORPORATION: Cruising To A Cleaner Planet”