Fintech (short for “Financial Technology”) in China has boomed in recent years. China leads the world when it comes to total users and market size. China’s digital payments account for nearly half of the global total. It is dominant in online lending, occupying three-quarters of the global market. Fintech is shaking up a stodgy banking system and helping build a more efficient one in China, especially for consumers and small businesses. [1] The largest Chinese fintech company, Ant Financial, affiliated to Alibaba group, brought innovative solutions to financial systems in China, from mobile payment, online lending to wealth management.

How did Ant Financial disrupt financial system in China? 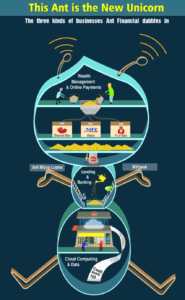 A few years ago, in China, people accumulated excessive savings but had few good products for investing. Small business owners were full of entrepreneurial ideas but facing hard time getting startup loans. Consumers had the increasing desire of spending more but needed cash to do so. Starting from Alipay, which controls more than 54% of China’s $5.5 trillion mobile payment in Q1 2017 followed by Wechat from Tencent [2], Ant Financial took the opportunities and evolved into a billion-dollar company that has a finger in almost every pie in China’s Fintech industry.

Created to build the trust system facilitating C2C transactions in Taobao, an ecommerce platform in Alibaba group, Alipay now accumulated 450 million users worldwide. The competitive advantage of Alipay is its one-stop platform. Many of the payment functions within Alipay exist elsewhere in the world, but in a very disaggregated form: Stripe or PayPal for online shops processing payments; Apple Pay or Android Pay for those using their phones as wallets; Facebook Messenger or Venmo for friends transferring money. [1] In China all these different functions have been combined onto single platforms which include additional features such as payment for utility bill, purchasing of flight or train tickets, donation to NGO.

With the mission of “bring the world equal opportunities”, Ant Financial lends out small loans to credit-starved small business left out by the banking systems, who prefer lending to state-owned companies. Established in 2014, the lender now approves more than $15 million in loans to small business owners each day. Each borrower receives a credit line of between $1,500 and $3,000. [4]

Alipay’s large customer base has fueled the rapid rise of internet finance products developed by Ant Financial. One of the most successful innovation products is Yu’e Bao, which is a money-market fund that offers higher interest rate than commercial banks (Figure 1), has accrued 370 million account holders and $211 billion in assets in just four years. [3] 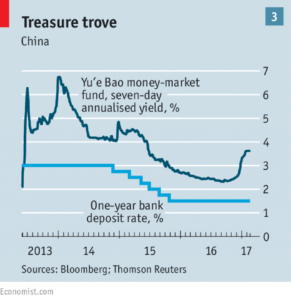 Jack Ma, the tycoon who controls Alibaba and Ant Financial, has a vision for Ant – to create a huge online network of local consumers and merchants in other countries, replicating Ant’s model in China. Over the past two years, Ant Financial has unveiled investments in countries including India, Thailand, South Korea and France, and is currently negotiating to acquire MoneyGram International Inc, a Texas-based money-transfer firm active in over 200 countries. [6]

Ant Financial is building a global network of merchants that accept its payment services, which aimed at the surging number of Chinese tourists who use Alipay mobile-payments application at home. By distributing its technology platform to retailers world-wide, Ant is laying the groundwork for what could eventually be a challenge to Visa Inc. and MasterCard Inc. [7]

The global opportunities for Ant Financial differ in emerging markets and developed markets. In emerging markets, Ant Financial, with the use of the right technology, could replicate the entire business model in China and create new norms in existing financial systems. In developed countries, where the credit system is well-established, the grand consolidation of payments, lending and investment could be the leading trend in the near future.

Banking is a tightly regulated industry. How to persuade the government in other countries that its approach is safe, transparent and beneficial to existing system is the challenge that Ant Financial will face. Can they nail it quickly? Well they have to, because they know the rival back home – Tencent, and big tech giants at Silicon Valley are also eyeing the pie.

H&M quenching the thirst of the fashion industry

Student comments on Can the giant Ant replicate its model worldwide?