In 1886, when Karl Benz submitted his patent for the first combustion engine powered vehicle, the German gave rise to a paradigm shift in personal transportation from carriages to modern automobiles. Since then, Germany has been an important constituent of the world’s automobile industry, leading auto exports for many years. Today, roughly 800,000 of its 80 Mio. citizens are employed in the automobile industry making it a significant share of GDP [1]. One can even argue that German automobile exports are impacting Germany’s foreign perception with attributes such as diligence, hard work, innovation, and quality made in Germany. 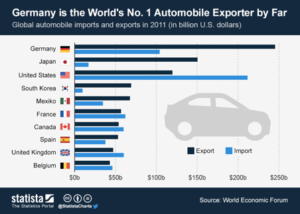 When climate change became a more widespread concern in the early 2000s the awareness of the negative effect of gas/diesel fueled cars on the environment sparked a search for alternative drive systems. While it is not yet clear that electric cars are the new paradigm of automobile engines, climate change definitely gave rise to a rethinking of the paradigm of the traditional German combustion engine and within a few years put the future of the German auto industry at risk of losing its position in the market.

The German car industry was stuck in a typical innovators’ dilemma: it had no interest to reinvent itself because it was in such a comfortable position [2]. While the Germans were still arguing over electric vs. natural gas vs. hydrogen powered engines in form of hybrid, plug in or fully fletched alternatives, tech-innovator and car-newbie Elon Musk of Tesla built his first fully fletched electric vehicle with a battery reach that significantly surpassed the German electric car experiments [2]. In 2015, Tesla topped European sales of all German electric vehicles and had significant negative effects on traditional German car sales in the US as customers were shifting towards electric engines [3]. It became apparent that the Germans auto industry had bid itself in the tail by lobbying against stricter regulation on more climate friendly cars.

The Germans had discounted the possible paradigm shift too much. In their perception traditional engines were significantly superior to the technological advances made in the electric field. This mindset combined with the limited support for electric mobility by German policymakers (relative to some other countries like Norway) and the resulting low uptake of electric car sales in Germany led them to underestimated worldwide demand for cleaner electric cars. 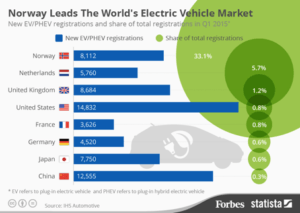 Since then, much has happened: German auto manufacturers have successfully built electric cars that can compete with Tesla, both in the luxury as well as the economy segment and German policy makers have implemented monetary incentives for purchases of electric vehicles [4]. Most recently, Volkswagen announced plans to become the electric car leader with a goal of achieving 20-25% of its annual sales with electric cars by 2025 [5]. Many observers believe that this mindset shift (even through it comes from a position of weakness because of the emissions scandal) and the unprecedented presence of German electric cars at the Paris Auto Salon in September of this year, marks the entry of the German auto industry in the race for technology leadership of new environmentally friendly car engines [6]. According to Kristina Church, head of the automotive industry desk at Barclays in London: “The time will come when the German carmakers can show their advantages.” [6] over Tesla who is still struggling to ramp up production to a similar scale.

To conclude, I think this example shows how significant the impact of external factors such as climate change can be on established industry paradigms and how an outside company that has embraced this shift has been able to cause great turmoil to the traditional market structure. The coming years will show if electric engines will prevail as the new paradigm and if Tesla can defend its position.

Going forward, regaining control over the market by focusing on environmentally friendly technology should be the Germans’ #1 priority. In the past weeks alone, two proposals made the German news headlines: 1. The German federal council (Bundesrat) proposed European-wide regulation to ban registration of new non-electric cars beyond 2030 [7], and 2. the Chinese industry and information technology ministry published a bill on its website that from 2018 onwards all car manufacturers need to fulfill a certain electric car quota [8]. And this is only the beginning: regardless of whether these two proposals will actually pass, the regulation on the impact of climate change will inevitably increase and the Germans need to prepare for this now, if they want to get back in the game.

Could Algae Fuel Your Next Flight?: Boeing Tests Biofuel’s Potential

Changing the World One Building at a Time

Student comments on Can the German auto industry catch up with Tesla?