“America’s Favorite Ketchup” is one of the most popular and recognizable condiments in the world, annually selling over 650 million bottles in 200 countries.1 This eponymous brand of the H.J. Heinz Co. (now Kraft-Heinz), based in Pittsburgh, Pennsylvania, also holds one of the highest satisfaction scores among the food and beverage industry according to a recent American Consumer Satisfaction Index Poll.2 However, the effects of global climate change are threatening to squeeze this ubiquitous product out of its enviable position. Not only are the raw materials of the product affected, but Heinz should also consider the overall energy cost and long-term viability of producing such a nutritionally deficient food.

Ketchup relies first and foremost on the raw materials, namely tomatoes and high fructose corn syrup, needed to produce it. Unfortunately, global climate change affects the agricultural production of these two resources as well as several other mitigating factors. For one, the Earth’s rising temperature has shifted rainfall patterns around the globe which results in unpredictable weather systems and severe droughts. California, as an example, had the driest year on record in 2015, and it also happens to be the number one producer of tomatoes in the US. To compound this issue, forecasts predict that “overall demand for water may outstrip supply by 40%” by 2030.3 Drought can obviously affect plant yield and quality, but this negative effect is especially poignant in the case of tomatoes because they require a relatively large volume of water for their size to ensure optimal growth.4 Additionally, scientists blame rising sea levels and “an increase in the prevalence of hurricanes and other destructive weather events” on the accumulation of greenhouse gases (GHG). This will affect all tomato producing regions, especially Florida, the number two tomato producer in the US. Another complication concerning changing weather patterns and rising temperatures is the potential for different pests and parasites to proliferate and attack crops in previously benign regions.3 Rising temperatures can also “heat stress” tomatoes and limit their ability to create viable pollen which can lead to lower yields.4

A Variety of Solutions

Heinz is proactive in addressing these effects of climate change and the imminent threat it poses to its most important resources. Using traditional breeding techniques, Heinz produces and continually refines the HeinzSeed which is a non-genetically modified hybrid seed that, according to Heinz, produces a higher yield, requires less water, and is more resistant to disease. In order to combat inefficiencies in the seed to plant transition, Heinz centralizes and initially manages the first growth stage of the tomatoes in the controlled environments of greenhouses so that only the best and healthiest seedlings are delivered to farmers. The company further saves on water usage by employing an innovative watering technique called drip irrigation. This style of irrigation, compared to the traditional furrow systems, uses a more precise system of water delivery that reduces water runoff and evaporation, uses less than 50% of water normally required, but still produces 30% more yields. In addition to these agricultural improvements, Heinz is limiting its carbon footprint by utilizing post-consumer recycled content and redesigning their bottles to minimize total overall weight by over 2500 tons per year.5

Although Heinz has proactively addressed some of the problems or future concerns of climate change, there are still options available to ensure the long-term viability of its raw materials and to minimize its carbon and environmental footprint. It would require a substantial capital investment, but the long-term benefits of a robust hydroponics infrastructure could mitigate almost all the above concerns addressed with climate change. Factors that are extremely variable and uncontrollable in a traditional agricultural setting can be precisely controlled using hydroponics which would result in higher yields and require no pesticides and minimal fertilizer. Natural sunlight could still be used and supplemented with light that could potentially be provided by solar panels. Hydroponic buildings can also use the vertical space to minimize land and soil usage. Water loss is also minimized.6 To further save on water consumption, Heinz could also explore the recent findings of the Agricultural Research Service which found a nearly water free way to peel tomatoes. The new technique utilizes infrared energy to loosen and then peel the tomatoes without using the traditional method of water mixed with chemicals such as sodium or potassium hydroxide. Not only is less water consumed, but there are no water disposal or treatment costs.7 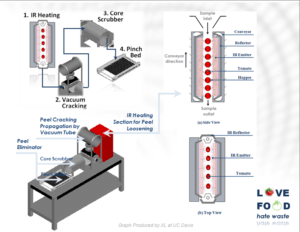 Climate change poses a legitimate threat to crops, especially Heinz’s precious tomato because of its susceptibility to heat and its relatively large consumption of water.  However, Heinz Ketchup’s commitment to sustainable energy and innovative agricultural techniques should position it well in the uncertain and unpredictable future of pending climate change. Heinz is going green (let’s just not make the ketchup green again à la EZ Squirt).

Student comments on Can Heinz Catch Up to Climate Change?