Poland is the fourth largest CO2 emission country in the European Union, contributing almost 9% (382 million tons) of all CO2 emissions in 20141. Although it classification as emerging versus developing countries is not clear, the country electricity production pattern is similar to those found in developing nations. Almost 90% of all energy produced is from coal, which directly translates into CO2 emission levels 50% above the EU average, according to the Ministry of Treasury Republic of Poland.2 Some worry that at its current production levels Poland will fail to meet the EU standards established during the Paris Climate Conference. EU member countries are required to produce 15% of electricity from renewables by 20203. As a result, private and public investments in wind and solar energy production are extremely important for the country. It is a phenomenon well understood by companies but not so much by the government. One of the companies that is trying to benefit from the EU regulation is EDF Nouvelle Group. 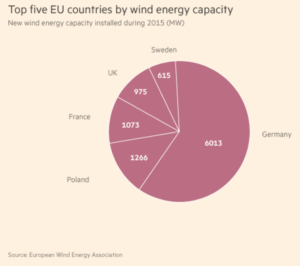 The renewable revolution in Poland is led by investments in wind power. In 2015, the wind power sector in Poland installed the second largest amount of turbine capacity in the EU, with total industry investments of EUR 8billion.4 These investments were led by EDF and two other companies (RWE and EON), which currently produce 13% of Poland’s electricity.2 The French EDF Energies Nouvelles Group is the largest player in this market. As a division of the French electric utility company Electricite de France S.A. (EDF), it set up in 2012 a subsidiary EDF EN Group Polska that focuses on wind energy development in Poland. The Group took over projects from a German developer Starke Wind with total future power production of 650 MW. The first wind farm was opened in Linowo in 2013 with a power of 48MW2. The second is located in Świecie and currently produces clean energy enough to cover 40,000 households for a year, lowering CO2 emissions by 80,000 tons per year. Two additional projects with power of 58MW and 28MW are scheduled for completion later this year.5 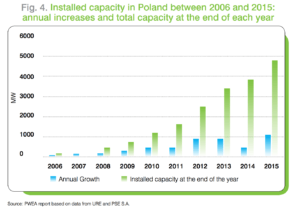 EDF EN Group Polska is not the first local subsidiary of the EDF Nouvelle Group. The company was set up in 1999 in order to prepare the French energy giant for the renewable energy revolution. The company is fast growing. As of 2015 it owned more than 9GW of renewable energy worldwide and had net income of EUR 2116. Aside from Poland, the company operates various wind and solar energy projects in the US, Israel, Morocco, South Africa, Brazil and Chile, and is planning an entry in China later this year.

However, the company is facing some regulatory headwinds. In Poland the future success of the company and the wind energy sector as a whole is unclear. The recently appointed ultraconservative rightwing government submitted to parliament a proposal this April that can trigger bankruptcies and divestments in the wind sector and put an end to the sector growth. The bill proposes to make it illegal to build turbines within 2km (1.2 miles) of buildings or forests, essentially ruling out 99% of land and quadrupling the tax payable on existing turbines. The bill also gives the power to authorities to close down each wind turbine during inspection months.7 Given the largest coal producers in Poland are state owned, critics of the proposal accuse the government of trying to preserve the current coal industry and eliminate competition. The Government on the other hand claims it is making effort to create a more “citizen friendly” legislation. Regardless of the motives, EDF Nouvelle has to slow down its progress in Poland and wait and see how the bill evolves. For now, it released warnings to the Polish government and is working closely with the polish Wind Energy Association to lobby against the proposal. It is also currently unclear how big the potential EU fines will be if EU members do not hit the 2020 renewable target and how hard will countries such as Germany pressure countries like Poland to obey the rules. As a result, EDF wind farm projects in Poland are currently on hold, however I expect the company to continue to grow in other European countries in the meantime. Ideally EDF should enter new markets within the EU to leverage its existing brand, size and the EU renewable rules.

2  Ministry of Treasury Republic of Poland, The future of Polish coal as energy source report, April 2014

Student comments on Can EDF Nouvelle Group continue to grow?