There’s a modern-day gold rush happening in California, but this one doesn’t glitter. Driven by increased health consciousness and oft-cited health studies, Americans are “consuming more than 10 times as many almonds as [they] did in 1965” (1). And they’re not just eating almonds by the handful – they’re pouring them over their cereal and into their coffee.

Meet Califia Farms, the Los Angeles-based new kid on the block that has helped make almond milk cool and given WhiteWave’s Silk and Blue Diamond’s Almond Breeze a run for their money. Founded in 2010 by Greg Steltenpohl, the entrepreneur behind Odwalla, Califia, with its distinctive rounded jugs and wholesome branding, has grown rapidly, reaching 27,000 storefronts in the U.S., and has gained industry recognition, winning BevNet’s 2015 Brand of the Year and Beverage World’s 2015 “Breakout Brand” (2). 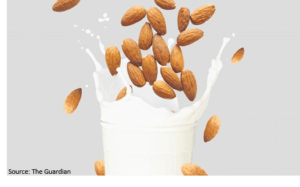 Califia started with citrus juices and has expanded into ready-to-drink coffee beverages, but its core product is its almond milk, which tripled in revenue in 2014 (3) and “experienced triple digit growth [in 2015]…accounting for 75%” of the growth of the overall almond milk category (2). Since 2010, that category has itself grown from 10% to 65% of the roughly billion dollar nondairy milk substitutes market, dethroning soy milk, long embittered by health concerns (4). 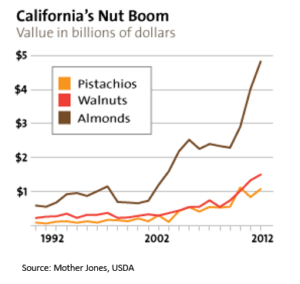 Given its Mediterranean climate, ideal for harvesting almonds, California produces almost the entirety of the U.S. almond supply, and comprises 82% of the global supply (1). California almond farmers are keeping pace with the demand and cashing in, with land devoted to almond production doubling and overall crop value growing at an 11% CAGR since 1995 (5). Almonds are big business, with industry revenues in California of $11bn (6), of which $4.5bn is exports, primarily to China (7).

But all is not well in the goldmine. California is in “its fifth year of severe drought” with “2015 as the warmest year on record” (8). The severity of the drought caused Governor Jerry Brown to declare a state of emergency in 2014, enacting residential and commercial water use restrictions. These restrictions were renewed in 2016, and drought conditions are expected to persist (8). Given a single almond requires an average of 1.3 gallons of water to produce (9), and almond production in California contributes roughly 10% of the state’s annual water usage (10), the almond rush will not be able to continue unchecked. 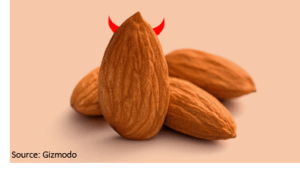 The amount of water required to produce a single almond and the fact that almonds are the state’s largest export have made them an easy scapegoat for California’s crisis.  Skeptics point out however, that almonds’ water requirement is comparable to other crops, and in fact less than that required to produce cow’s milk (10). The issue is one of timing.

Unlike “row” crops such as tomatoes, which can be left fallow in a dry year, almond trees are permanent (11) and “must be watered even when they’re not producing…farmers are locking in future water use for decades to come” (10) in areas of the state where “water shortages are most severe” (11). As global climate change and California’s drought continue, almond growers risk further restrictions 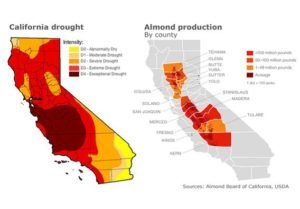 on their water supplies, but can’t simply relocate their trees.

Califia Farms has built its brand on an input that will become increasingly expensive and limited as climate change continues to put pressure on California’s water supply, but the company has made sustainability a core component of its message. When it comes to its own production process, Califia repurposes over 90% of its post-production byproduct (mostly water) for irrigation on farms near its facility, and has reduced water usage at its production plant by 64% from ’15 to ’16 (12). While admirable, these improvements pale in comparison to the environmental impact of the upstream almond production Califia relies on. To address this, the company has made sure to partner with growers that use drip-irrigation methods (only 30% of growers still use high-volume flood irrigation (7)) and active soil monitoring to reduce water usage (12). 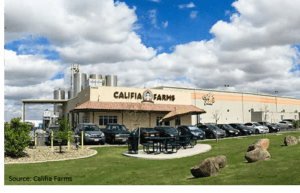 As an innovator at the forefront of the plant-based beverage space, and one whose brand depends on almonds, Califia must do more. Incremental efficiencies will not change the fact that almonds are becoming an unsustainably large part of California’s agricultural complex and resource use. “High-input, mono-crop agriculture [is] a ‘key driver of and major victim of global warming” (13), and the solution lies in agricultural diversification.

Califia has turned almonds into gold, but to be a sustainable company, it must now leverage its know-how and powerful brand to find and market the next plant-based milk, reducing reliance on almonds. Let’s just hope it tastes as good.

The Death of the Ski Industry?

Student comments on Califia Farms: Cracking the Drought in California