Saudi Aramco (“Aramco”), the state-owned oil company of Saudi Arabia, is the 2nd largest producer of crude oil in the world[1]. Aramco’s daily production of 10.5 million barrels (2016) is 1.2x the production of the entire United States and drives ~50% of Saudi Arabia’s Gross Domestic Product[2]. With annual revenues exceeding $300B[3] and an estimated market cap between $1-2 trillion[4], Aramco is widely considered the world’s most valuable company. However, Aramco now faces a significant threat to its future as the concern for the effects of greenhouse gases on the environment has driven governments worldwide to seek out methods (e.g., renewable energy, fuel efficient vehicles) to reduce oil consumption and greenhouse gas emissions. To this end, Saudi Arabia and 195 other nations signed the Paris Climate Accord, a pact reflecting a commitment from each government to reduce greenhouse gas emissions and limit the rise of global temperatures[5]. Aramco (and by extension, Saudi Arabia), the historically slow-moving oil giant, must now adapt quickly if it is to secure its future. 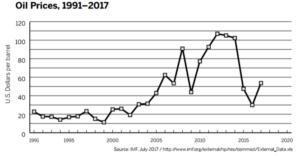 Saudi Arabia has appointed its crown prince, Mohammad Bin Salman, to lead the effort to diversify the country’s economy. He has put forth a “Vision 2030” plan[6] that outlines the steps necessary to transform Saudi Arabia into, among other things, an investment powerhouse. In many ways, the fate of Vision 2030 rests on the ability of Aramco to evolve. To that end, Aramco is exploring several initiatives, each with unique challenges, to prepare for a future with less reliance on oil. Key initiatives include: (i) an Initial Public Offering (“IPO”) (ii) investments in renewable energy infrastructure and (iii) clean energy acquisitions.

Though these initiatives are focused on developing a competence beyond oil, Aramco must continue to invest in alternative methods to utilize its 260 billion barrels in crude reserves[11]. One such method is utilizing crude as an input to manufacture value-added polymers that can be used for coatings, packaging, and other specialty chemical products. A recent partnership with Dow Chemical[12], facilitating the development of a large-scale production facility to process hydrocarbons into products for a wide array of end-markets, is a step in the right direction. Similar partnerships will be necessary to enable such swift industrial developments.

While Aramco must ensure that it continues to leverage the best of the international community (e.g. investors, partnerships), it must also make better use of internal resources (e.g. inclusion of more women in the workplace) if it is to thrive. In short, Aramco and Saudi Arabia will need to become more modern, nimble, and innovative to succeed – which may run counter to conservative religious constraints in certain instances. While it appears as though Aramco is making progress towards securing a more diversified future, the question remains: is economic necessity enough to mobilize the company (and country) away from the ways of the past and towards the promise of the future, or is it already too late?

The effect of digitizing one organization, on over a billion people

Student comments on Burden of Arabia