Globally, wealth managers had $74 trillion in assets under management (AUM) in 2014.  The percentage of that managed by robo-advisors (automated, algorithm-based portfolio management advice) is currently only a small fraction, but expected to grow incredibly rapidly. [1] 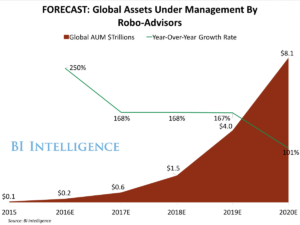 SigFig is a robo-advisor hoping to reap some of the expected rewards during the digital transformation of the wealth management industry. Like its better known cousins Betterment and Wealthfront, SigFig started out with a business-to-consumer (B2C) business model, looking to get consumers directly onto its platform. SigFig, however, was late to the game, launching that service in early 2014, and by mid-2015 only had $69 million under management [2]. In this author’s humble opinion, SigFig had the best technology, so why was it doing so poorly?

The reason, of course, is that in a highly competitive industry, it is not just the best technology that wins. SigFig’s robo-advisor competitors had been around for longer and had raised more money, allowing for greater marketing. And from an operational perspective, there was limited differentiation from their competitors, who were all small tech companies who were built to iterate quickly and constantly to deliver what needy customers demanded.

A Change in Business Model to Survive

In mid-2015, SigFig changed its business model from B2C to business-to-business (B2B) [2]. By moving to a less competitive B2B space, SigFig could look to partner with banks who already had significant AUM and more effectively participate in the rapid transformation of the wealth management industry. I think the premise would be that big banks wanted to quickly offer robo-advising to their customers, as well as have a technology that can keep up with its customers’ demands. SigFig was able to build out its technological capabilities so its tech could integrate with the bank’s own system, which allowed for this business model transition.

SigFig’s DNA as a small tech company meant that it has an operating model that relied on real-time feedback from customers using their technology, and the ability to incorporate that feedback into technological improvement. Banks, on the other hand, were less nimble and in theory would be less comfortable developing their own technology, which may have trouble keeping up in the rapidly moving world of robo-advising.

SigFig struck its first deal with Cambridge Savings Bank, a $3.2 billion bank, who is calling its SigFig offering Connect Invest. [3] Since then, SigFig has engaged in partnerships with two much larger banks.

In May 2016, SigFig signed a partnership with UBS. Interestingly, UBS isn’t aiming to use SigFig’s technology to provide robo-advising to the masses. Rather the partnership is “designed to enhance and expand the services our advisers can provide to their clients and their overall digital experience,” according to the president of UBS Americas. [4] The use of this technology doesn’t seem to match SigFig’s robo-advising business model – it looks like its creating wealth management tools, and no advice is being given.

Despite that, UBS did realize the value of SigFig’s operating model in digital world, noting that “we wanted to partner with a player who was leading in the industry in the space, who had the ability to adapt rapidly, to prototype rapidly and to launch incremental capabilities in really short timeframes.” [5]

Within the last week, SigFig has engaged in a partnership with Wells Fargo that has a distinctively different flavor to the UBS partnership. Wells Fargo has noted that it hopes to use the partnership to bring robo-advising to its clients, and use this as the gateway for more expensive services. [7] This seems to fit perfectly with SigFig’s business model.

However, Wells Fargo also stated that the decision to partner rather than build a product in house was due to desire to bring a product to market ASAP, which doesn’t seem to recognize the value of SigFig’s operating model in enhancing technology. [7]

Next Steps for SigFig

I think fundamentally it doesn’t matter whether SigFig provides robo-advising to banks or not – banks’ customers are demanding snazzy tech interfaces and information transparency, and SigFig can position itself as the provider of whatever that tech is. What SigFig absolutely needs to do is demonstrate that their operating model allows them to become more intimate with their technology and what customers want, and reflect that understanding quickly in the next iteration of that tech. Whatever SigFig builds, a bank will be able to also build it if given enough time. But they won’t be able to keep it at the cutting edge in the same way a small nimble company like SigFig can. SigFig needs to convince all its partners (looking at you Wells Fargo) that’s the case – otherwise they won’t be around long enough to see the digital transformation.  [Word Count: 799 words]

2 Kelly O’Mara, “Why SigFig is shifting its focus to using banks as middlemen despite having captive consumer audience of $350 billion,” RIABiz, July 21, 2015, http://riabiz.com/a/2015/7/21/why-sigfig-is-shifting-its-focus-to-using-banks-as-middlemen-despite-having-captive-consumer-audience-with-350-billion, accessed November 2016.

If an Algorithm Wrote This Blog Post, Would You Be Able to Tell?

FedEx – the next big Challenge

Student comments on Bringing Robo-advising to the World, One Bank at a Time