When most people think of Walmart, they do not think of high technology. But the Bentonville behemoth has made major strides in the past ten years towards embracing digitization, and in 2015 topped the list of biggest technology spenders worldwide at $10.5B (6). Walmart has not only made eCommerce part of its business model, it has sought to thrive in this space through innovation and acquisitions. It has also enhanced the day-to-day operating model by investing in technologies that make the shopping experience more enjoyable. There is still room to improve, but overall Walmart has treated digitization as a major opportunity, using it to further the company tenet, “Save Money, Live Better”.

Initially, the advent of eCommerce came as a threat to Walmart, which operates over 11,500 brick-and-mortar stores internationally (1). Walmart proactively addressed this challenge by entering the eCommerce space with Walmart.com in 2000 (1). Since then, the company has invested billions in its online operation but has trailed Amazon on every success metric (2). In 2015, Amazon posted more than seven times Walmart’s $13.7B in online sales (4). Walmart’s August 2016 acquisition of Jet for $3.3B signifies a renewed commitment to optimizing the online shopping experience as well as the behind-the-scenes logistics (3). The two companies will operate semi-autonomously, Walmart will benefit from Jet’s proprietary technology in “gain sharing”, which encourages customers to buy more items at once to reduce supply chain and logistics costs. (3)

One major operating model shift that Walmart is experimenting with is online grocery shopping with is same-day pickup. This move is an attempt to take advantage of something Amazon does not have: a network of thousands of physical stores. Since 2015, Walmart has expanded this program from five stores to 80 across the U.S. (4) Though it may seem odd to order online only to drive to the store, customers seem to ascribe value to having their groceries packed and carried to the car.  This unique intersection of new technology and traditional retail could only be achieved by Walmart, which has a location within 10 miles of 90% of Americans’ homes (4).

Another addition to the Walmart operating model is @WalmartLabs, an innovative group within Walmart with a mission “to build products that seamlessly integrate the online and in-store shopping experiences for millions of customers” (5). Heavily weighted with data scientists and engineers rather than retail specialists, it functions as an “idea incubator” focused on innovations that will better connect shoppers with Walmart in the future. So far, this Silicon Valley -based group has made use of cutting edge technology in two ways: 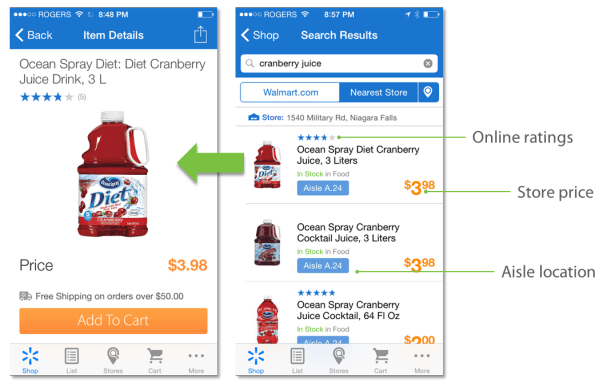 While @WalmartLabs focuses primarily on apps and big data, there is a group within Walmart working on another version of smart, connected products: artificial intelligence. In September 2016, Walmart was granted a patent for self-driving shopping carts (pictured below): 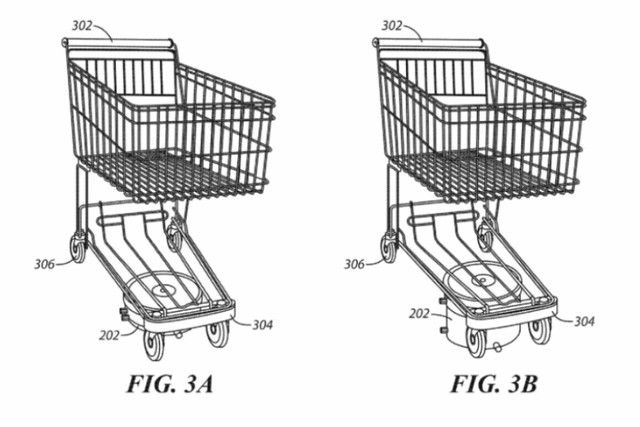 The idea is that detachable motors will drive carts to customers when summoned (7). In the short term, this may be no more than a gimmick to draw shoppers to the brick-and-mortar store. Over time, however, Walmart plans to use this technology as part of a larger robotized inventory system whereby carts pick up and transport items across warehouses and stores (7). This could have positive implications for customer experience and cost management, but likely negative implications from a job loss standpoint.

Walmart has adapted to changing times by expanding into eCommerce and, at the same time, making some big bets on operating model changes meant to help people “Save Money, Live Better”. Walmart should continue investing in connected products and services, but I caution them not to lose sight of the needs of the core customer base.  For instance, as helpful as the Walmart app may be, not all Walmart customers have smart phones. The store should investigate the possibility of installing in-store kiosks or even loaning shoppers a device for the duration of the trip. Furthermore, nearly 85% of Walmart customers pay in cash or cash equivalent (8). Walmart has tried to cater to this contingent with a “Pay with Cash” program that allows customers to order online and then pay at their local store within 48 hours. This seems cumbersome and not in the spirit of a truly streamlined experience. One workaround could be encouraging customers to buy gift cards while in the store, so that next time they shop online they have the equivalent of cash at their fingertips. There’s one thing Walmart and technology certainly have in common: neither is going anywhere anytime soon.

Uber: Will it go too far?

Student comments on Bricks and Clicks: How Walmart is Winning with Digital Technology