On 23rd June 2016, the UK voted to leave the European Union (EU), a move now widely known as ‘Brexit’. The UK government is currently negotiating a post-Brexit deal with the EU, with both parties trading the ‘four freedoms’ (goods, capital, services, and labor) against each other. Whilst much talk has centered on the implications for businesses, especially those in the manufacturing and service sectors, less attention has been paid to the impact on the UK’s National Health Service (NHS). With more than 1.5 million employees, and an annual budget of over £110B, the institution is the UK’s largest employer1. A recent paper in the Lancet2 has stated that Brexit in any form poses ‘substantial threats’ and that the ‘scale of the task risks overwhelming parliament and the civil service’ (Fig. 1). 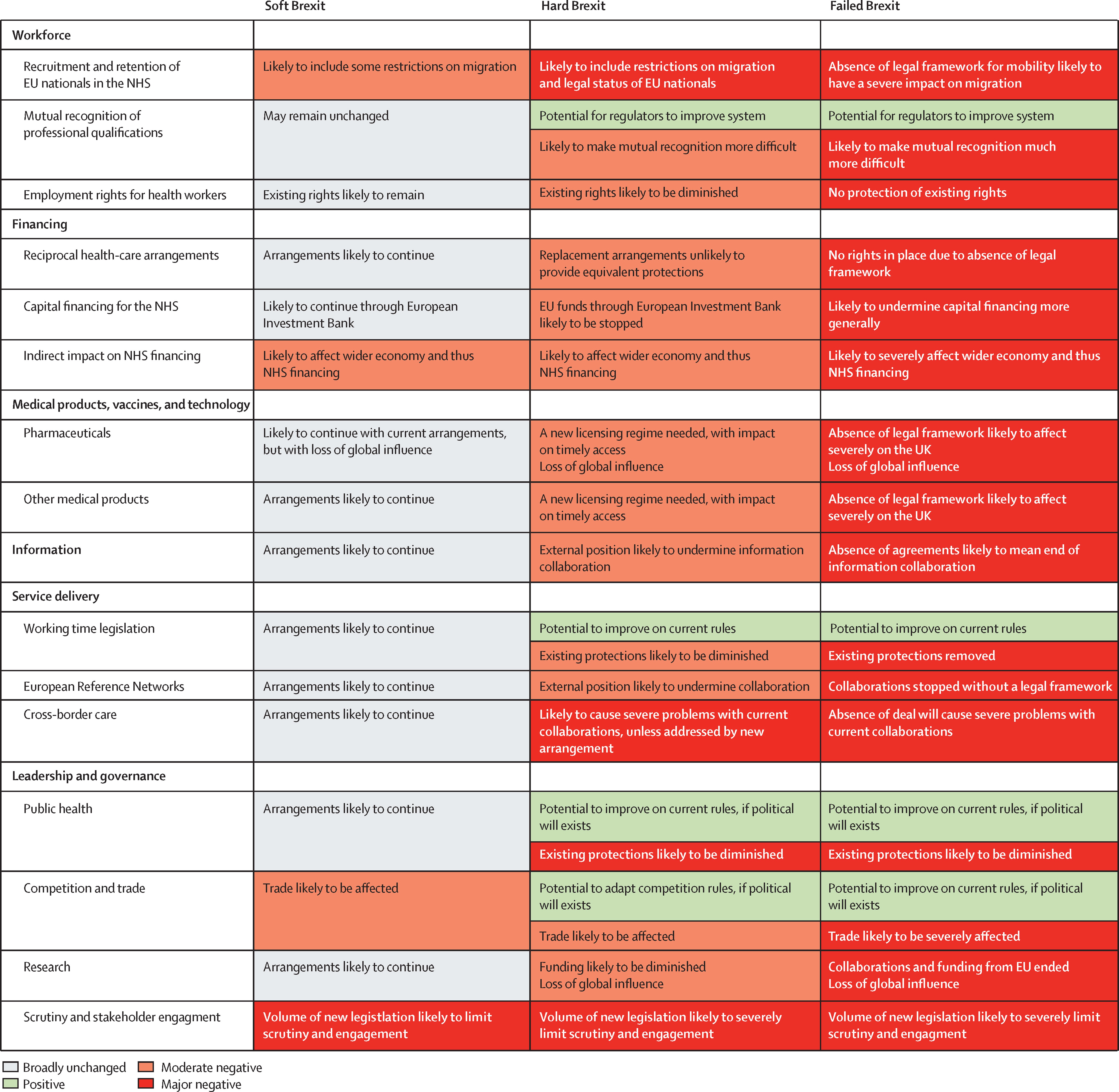 Brexit has the potential to cause 2 major supply chain issues within the NHS. Firstly, staffing is of key concern; there are an estimated 60,000 EU nationals working for the NHS3, including over 10,000 doctors and 20,000 nurses (5.6% of all NHS personnel4). An uncertain future for EU workers has already caused the number of EU citizens registering as nurses to drop by over 90%5,6. Secondly, the UK’s access to pharmaceuticals and medical supplies from Europe is at risk. Medicines across Europe have integrated supply chains, with thousands of drugs having some part of their manufacturing process in the UK7 . In the event of a ‘no deal’ Brexit, significant delays are expected if World Trade Organization (WTO) rules are implemented.

The key to resolving these uncertainties lies with the quality of the deal that the UK government strikes with the EU. It is clear that the implications of a ‘no deal’ scenario are serious for the NHS. As Simon Stevens, CEO of NHS England recently remarked, the NHS has no contingency plan in place for such an outcome8. The government has stated that some contingency planning is occurring9, however, there is no transparency on this for fear of undermining UK-EU negotiations. Nevertheless, the UK parliament’s Health Committee has stated that it ‘do[es] not believe that this approach will prove sustainable in helping the government to avoid errors and unintended consequences in the process of negotiation.’9

Regarding staffing, the UK’s Health Secretary has said that allowing EU-originating NHS workers to stay in the UK after Brexit is a high priority in UK-EU negotiations, however, there has been no explicit government commitment to this10. According to the National Audit Office, the number of currently vacant NHS clinical posts is over 50,00011; the challenge after Brexit will be to fill these positions whilst immigration is falling.

In the short term, the government needs to explicitly confirm that EU staff working in the NHS will be able to remain in the UK after Brexit. This could take the form of a work permit system that allows free movement of EU-originating NHS personnel within the UK. Over the next 10 years, the number of medical training placements for both doctors and nurses needs to be continually increased. The government must outline and execute a plan for making the NHS self-sufficient in personnel. Part of this will likely involve increasing wages to attract more domestic workers. In the event of a ‘no deal’ scenario, the need for staffing self-sufficiency is more urgent.

The UK needs to remain part of the European medicine market so that new products can be introduced to the UK quickly, and the NHS can rely on supplies from across Europe. The NHS should continue to push for a deal that allows the UK to work closely with the European Medicines Agency (EMA; the EU medicines regulator). Indeed, the EMA is in London – until now, this has pulled pharmaceutical companies towards the UK12. The government has attempted to reassure these companies that the UK and EU will continue to work together on drug regulation after Brexit13. The government should go further, offering attractive incentives for pharmaceutical companies to remain in the UK after Brexit, ensuring that the NHS has easy access to new products in the future.

A couple of key questions remain unanswered as we realize the implications of Brexit for the NHS. How could the NHS reorganize to survive under a ‘no deal’ scenario if EU negotiations are unsuccessful? And perhaps more contentious, what role, if any, should the private sector play in the future of the NHS?

[6] “Getting A Brexit Deal That Works For The NHS”. 2017. The Nuffield Trust. https://www.nuffieldtrust.org.uk/research/getting-a-brexit-deal-that-works-for-the-nhs

[12] Majeed, Professor, and Professor Sked. 2017. “Preparing For The Impact Of Brexit On Health In The UK – UK In A Changing Europe”. Ukandeu.Ac.Uk. http://ukandeu.ac.uk/brexits-impact-on-the-uks-health/

The power of GIS for UNCHR – visualizing supply chains

Attention Hastings: Millennials are replacing “mom and pop” and machine learning will wipe you out