There is a strange paradox between the simplicity to connect two individuals using today’s evolving technology and the complexity to connect two countries in today’s world. Technology has been widely used in the supply chain to support logistics planning and scheduling [1]. Meanwhile, the world is currently undergoing a period of cascading protectionism [2], caused by an uprising wave of nationalism in several countries [3]. This disconnect between the openness brought by innovation and the confinement instituted by protectionist governments prevents us to harvest the benefits of international trade, such as increased value-added and employment [4].

The $300 Billion “connection problem” of Aerospace

To exemplify how protectionism can affect an entire industry, let’s look into Aerospace. An airplane is assembled by combining over 300,000 parts, which come from hundreds of different suppliers spread out through several countries [5]. With the institution of protectionist measures by several countries, such as local content policies [6], the whole aerospace supply chain, and the value it creates, would be at risk.

In 2016, the Aerospace industry accounted for $328.7 Billion in exports among over 200 countries [7]. Exhibit 1 illustrates how much value each country produces directly from aerospace products exports.

John Flannery, recent elected CEO of GE, and David Joyce, CEO of GE Aviation, have a great challenge ahead of them. According to GE’s 2016 annual report, 85% of their revenue for aircraft engines and gas turbines have been sold abroad [8].

To win in every country. It sounds too simplistic for a company with revenues of $120 Billion, but indeed that’s GE strategy: simplify [8]. In 2015 GE Aviation started its global expansion by creating roots in Europe, Canada, Brazil, and China, where they invested over half a billion dollars to create new facilities to produce turbines [9].

GE’s leadership believes that having a local footprint will help them navigate turbulent trade relations between countries and will help them establish partnerships with local governments [10]. Having a local facility is a well-known strategy to overcome regulatory demands in highly regulated industries such Banking [11] and Energy [12]. 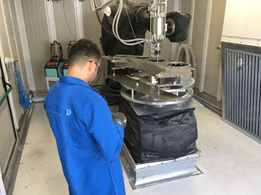 Additive manufacturing, or 3D-printing, is a technology capable of producing parts by deposing layers of material, one layer on top of the other [15]. This technology has the potential to produce lighter parts, with more audacious designs and using less material than conventional technologies [16]. Besides that, 3D-printing allows a distributed production process, meaning that GE Aviation can design the part in its headquarters in Ohio, send the file electronically to its factory in Brazil, print the part in Brazil and deliver it in the same day as a locally produced part.

With the acquisitions and investments in new facilities, GE Aviation is creating a network of factories capable of producing 3D-printed parts all over the world. This network will allow them to overcome trade barriers by just sending the CAD (Computer Aided Design) file of the part they need to produce to the country in which production needs to occur, and print the part without the need for specialized labor to be present in the facilities.

What else could be done?

To ensure that the global production strategy thrives, GE Aviation should pay attention to two major characteristics of the 3D-printing market:

3D-printing has evolved and can now help GE Aviation overcome trade barriers. However, will the governments ever start regulating internet traffic to the point that designs made in the U.S. could not be produced somewhere else? Also, will local governments support the expansion of this technology that creates fewer jobs?

27 thoughts on “Breaking the walls with 3D printing”