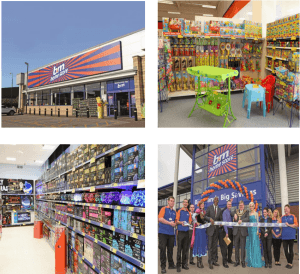 B&M is the UK’s largest and fastest-growing value retailer (524 stores today vs. 21 in 2004), selling a mix of grocery and non-grocery goods. The grocery offer acts as a traffic driver, with customers attracted by “everyday low prices” across a wide range of A-brands like Cadburys and Coca-Cola, while the higher margin, primarily private label, non-grocery range tops up the basket of the customer, who enjoys a “treasure-hunt” for bargains.

B&M is able to sustain its extremely competitive pricing policy on the back of three pillars: (i) best-in-class sourcing capabilities; (ii) well-sited, high-traffic and lower-rent locations; and (iii) a very light cost base with minimal investment. The stores might not be the most aesthetically pleasing but they provide B&M’s core customers with exactly the offer and pricing policy they want.

That B&M is able to do be price- and site-competitive in one of the world’s most developed retail markets, competing against the likes of Walmart and Tesco, growing largely from nothing since 2004, speaks volumes about the success of their operating model. 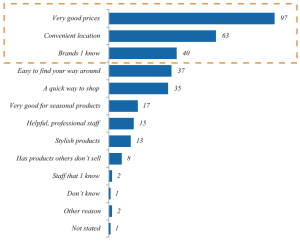 At a high-level, B&M has a strict policy to limit the range of SKUs to 5,500 SKUs with a strict “one in one out” policy. This eliminates complexity at both a warehouse and store level, while also allowing the company to focus on only the highest selling products. Sales are constantly monitored and suppliers are loathe to find themselves removed from stores.

Grocery products are sourced from UK FMCG firms and third-party distributors. B&M is able to offer better terms to their suppliers than larger grocers like Tesco, offering to pay in cash, up-front and for larger volumes, enabling them to get the best prices at the expense of payment terms. They are also willing to source end-of-line products and “grey market” products from other parts of the European Union (e.g. Polish Coca Cola). As discounters like B&M have gained scale, large FMCG players like P&G and Coca-Cola have proved more than willing to work with them, providing them with unique SKU sizes and competitive pricing creating a win-win situation where B&M is able to source the cheapest branded products while larger FMCG players gain another avenue for growth.

Non-grocery is sourced using B&M’s 100 person strong UK purchasing and design team (in addition to a staff of 35 employed in Hong Kong). This is a huge investment relative to competition, most of whom still source their product through agents and wholesalers. Within general merchandise, B&M designs (primarily by copying versions of higher-end competitors) and then sources the products direct from factories in China. Due to the scale of the operations and the direct link to sourcing, B&M is consistently able to secure the best prices. Further, they have none of the sourcing requirements a Walmart may insist on (e.g. knowing exactly which factory produced a certain product), further driving down prices. Up to a quarter of non-grocery is devoted to seasonal displays (Spring means gardening, Autumn is Halloween, etc.). Decisions and order commitments are made quickly, in full container sizes and payments made up front. Competitors often need weeks, if not months, from getting a quote, until the order is placed. 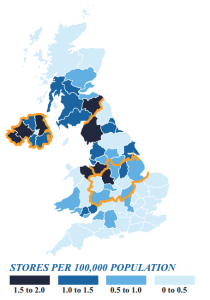 B&M has taken advantage of the weak economic environment in the UK from 2007-11. This period proved to be an once-in-a-lifetime opportunity to seize space, as poorer regions outside the South East saw falling incomes, declining footfall and major store closures by retailers. Landlords proved desperate to fill sites and as a result B&M’s team has been able to take attractive high street locations at extremely low rents and favorable terms throughout their target market.

A further advantage of the operating model proved to be their flexibility in site location. Not just tied to high street locations where they might compete with other discounters or grocers, they looked to take out-of-town big box sites as they also became vacated in 2007-2011. With little competition for these big-box locations, landlords actually started to seek B&M out as traffic drivers who might make these locations more attractive for other retailers.

Finally, a key policy of B&M is minimise investment in facilities, customers don’t care what the shop looks like as long as the goods are well presented. The bare minimum maintained is that it is clean and safe and the prices are low.

Strong cost control means head office costs are low, with minimal staffing and IT. Unlike Tesco, headquarters are not a sophisticated office park but a warehouse outside of Liverpool. Further, the business doesn’t waste any money on marketing. This also isn’t necessary as 97% of shoppers coming because of location or a recommendation from friends. All efforts are directed to low prices instead.

B&M’s operating model has reinforced its successful business model. Offering the lowest prices and successfully growing in a competitive market is extremely difficult, and stealing share from Tesco previously viewed as impossible, however B&M has achieved this with their best-in-class sourcing operations and cost-base.