A brief history of Bitcoin:

Bitcoin is a ‘cryptocurrency’ – a form of digital cash that uses cryptography to regulate its creation and management. Its origins can be traced to paper posted to the internet in November 2008 entitled: bitcoin: A Peer-to-peer Electronic Cash System.  The paper’s author, Satoshi Nakamoto, then created the first 50 bitcoins known as the “genesis block”.1  Fast-forward eight years and nearly 10,000,000 transactions per month are now made with bitcoin.2

While there were several attempts to create a digital currency prior to bitcoin (hashcash, RPOW, and eCash), none of them employed the associated ‘blockchain’ conceptualized by Satoshi Nakamoto.  All of bitcoin’s power is derived from the blockchain – in it lies the potential to fundamentally change the way we transfer value.

The Brilliance of the Blockchain:

In essence the blockchain is a digital paper-trail.  The blockchain records every transaction ever made with each individual bitcoin in sequential order over the lifetime of the bitcoin, and

this transactional history cannot be overwritten.  Each time a transaction is made, it is recorded by linking new block to the original chain.  Stephen Armstrong, from Wired Magazine, writes “the blockchain is a decentralized electronic ledger with duplicate copies on thousands of computers around the world. It cannot be altered retrospectively, allowing asset ownership and transfer to be recorded without external verification.”3

Okay.  Seems simple enough. But so what?  What does the blockchain really do for us?

Ultimately, it is about trust.  By decentralizing the data you now have thousands of identical copies of the blockchains throughout the world. This avoids the traditionally vulnerable centralized data hubs that are popular targets for hackers, and the system virtually eliminates fraud as no ‘official’ copy of the data exists.  In fact, it turns out that the creator, Satoshi Nakamoto, doesn’t actually exist and the name was simply an alias; while there is plenty of speculation, no one actually knows who created the ‘genesis block’.

According to Alex and Don Tapscott from the Harvard Business Review: “On the blockchain, trust is established, not by powerful intermediaries like banks, governments and technology companies, but through mass collaboration and clever code. Blockchains ensure integrity and trust between strangers. They make it difficult to cheat.”4

What this means for financial transactions:

Bitcoin’s technology eliminates the need for central banks and governments oversight of transactions.  Instead of complicated transactions between banks, bitcoin creates a simple, digital, transparent, and trustworthy system for transferring money.5

“The history of money transfers teaches one enduring lesson. When you reduce the cost of making a money or currency transfer, you reduce trading costs, hence encourage increased trade. Increased trade brings about increased economic growth, which benefits all involved.”6 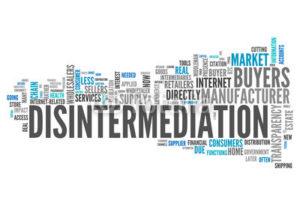 Now, while I’m sure the Winklevosses truly wanted to benefit all involved, they certainly saw the opportunity to benefit themselves, and created a bitcoin-based ETF which tracked the exchange rate of bitcoin with the US dollar.

However, we can all take solace in that once again, in true Winklevoss fashion, the twins drastically underestimated the power of the technology that they had in their grasp.

Blockchain as a Blockbuster

I originally thought of writing about bitcoin because I was interested in the concept of using its transactional history in other applications.  I wondered, for instance, what if you could track exactly how many times a song is played, and by whom?  Consider the possibility of an artist releasing a limited number of digital copies of her song.  Instead of needing the record labels to control the IP, she could be payed directly by the consumer of the music (Pandora’s price point of $.001 per stream would be obliterated).  Disintermediation.

Well it turns out, I was not the only one considering the extensions of blockchain technology and the impact it could have. Mycela is company in the music industry example doing exactly what I mentioned above (I swear I had that idea independently).  From IP, to art, to coding, to manufacturing, the blockchain ledger can be used to track any ‘event’ that occurs in the digital world, and we can mine that data for patterns that further our understanding of human behavior and the universe at large.

“The technology most likely to change the next decade of business is not the social web, big data, the cloud, robotics, or even artificial intelligence. It’s the blockchain…”7

3 Armstrong, Stephen. “Move over Bitcoin, the blockchain is only just getting started.” Wired Magazine. Available at:

4, 7  Tapscott, Alex. Tapscott, Don. “The Impact of the Blockchain Goes Beyond Financial Services”. The Harvard Business Review.  Available at: https://hbr.org/2016/05/the-impact-of-the-blockchain-goes-beyond-financial-services. May 10th 2016.

5, 6 “The Future of Money Transfer: how bitcoin and block-chain based open ledgers are going to transform the world of money”.  FreeMIT. Available at: https://www.freemit.com/blog/the-future-of-money-transfer-how-bitcoin-and-blockchain-technology-will-change-everything/ Accessed Novemeber 17th 2016.

Bitcoin and the Blockchain

Coding Trust – Blockchain Contracts and the Law of the Future

Student comments on Bitcoin and the Blockchain