“Smart city” is a hot concept that is hard to identify in our everyday lives. Broadly, smart city is the idea of using connected technologies and data collection (aka Internet of Things) to make city and municipal operations more efficient [1]. Promising areas for development are electricity and water distribution, transportation, buildings, and city services.

Founded in 2003, Bigbelly is a Boston-based manufacturer of solar-powered waste stations. Each receptacle features a sensor that measures fill levels, and communicates this information to city/facility managers. Combined with the built-in compactor that allows Bigbelly to hold up to eight times the waste of a standard bin, municipalities are able to vastly increase the efficiency of their waste management operations. That means less running time of garbage trucks and crews, and less emission of CO2 and other tail-pipe pollutants. Bigbelly has deployed 30,000 waste stations across 47 countries [2], and is especially notable for its presence on the Harvard Business School campus dating back to a 2009 partnership with the university. 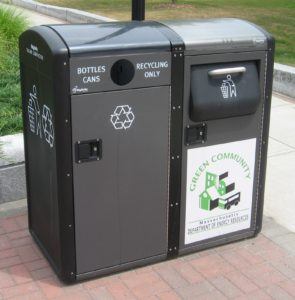 The biggest issue with implementation of Bigbelly waste stations, and any other smart city initiative, is alignment between the technology and the city manager. Bigbelly stations produce a lot of data, and it’s up to the end user to make good use of the data. This issue played out in Philadelphia in 2010, when, after being credited by the mayor for saving the city $1 million a year, the Bigbelly program was blasted in a report by the City Controller. The Controller’s report highlighted the following issues:

City managers need to view smart city initiatives as a full-scale change to operations, not a one-time investment. One idea to address this issue is the creation of a smart city hub within a city management organization. The hub could sit across functional groups – such as waste management and road maintenance – in order to integrate new streams of data and ensure that operations reflect the capabilities of newly installed technologies, thus capturing the ROI of various smart city initiatives.

Facing its next stage of growth, Bigbelly has recently embarked on a dramatic shift in strategy. Whereas they previously sold machines and their connectivity under an upfront purchase model, the company is transitioning to a subscription-based model under the guise of “anything as a service” (XaaS). Under the subscription model, Bigbelly bins will offer Wi-Fi access, digital advertising, and additional data on environmental conditions such as air purity.

The challenge for Bigbelly in successfully implementing its subscription strategy will be convincing its government and municipal customers, with notoriously bureaucratic procurement processes, to get onboard. Bigbelly will also likely face privacy and data protection concerns as a company known for manufacturing trash bins becomes a critical node in a robust information transfer system [4].

So far smart city has been more hype than results, but the hype is of a large scale. A 2014 report from Frost & Sullivan predicts that the smart city market will grow to $1.57 trillion by 2020. Meanwhile, Q3 2016 saw $741 million of venture capital investment, the most money since 2014 [5]. Smart cities show promise for entrepreneurs, investors, and citizens, but success will ultimately depend on innovative, holistic, and forward-thinking implementation by municipal and city governments – a difficult prospect.

Will V-Commerce Replace E-Commerce at Wayfair?