Following the devastation caused by Hurricane Katrina in 2005, New Orleans captured the nation’s attention as it dealt with the far-reaching impacts of the deadly storm.  Outside of the human error involved in the faulty engineering of New Orleans’ failed levee system, one of the primary focus items was the future vulnerabilities that would continue to plague the city’s infrastructure due to shifting climate activity.

Rising sea levels and more frequent and severe storms resulting from climate change are existential threats to our nation at large, but the danger is especially acute for our country’s ports, particularly those in the Gulf Coast area.  The Port of New Orleans (“Port”), located at the mouth of the Mississippi River and on the Gulf of Mexico, is the 16th largest port in the U.S. by cargo capacity [1] and a major facilitator of the transportation of the nation’s imports and exports.  Given its critical importance to the U.S. economy and domestic and international supply chains, the Port must actively prepare for the impact climate change will have on its operations in the years to come.  According to the U.S. Environmental Protection Agency (“EPA”) [2], the number of risks ports face related to climate change include, but are not limited to:

Port authorities struggle with how to address these concerns, given the uncertainty of timing and scale associated with climate change.  In the near and medium term, the Port is responding to the threat of climate change by examining its own contribution to the problem.  The Port is participating in the “Resilient New Orleans” climate change strategy, which, spearheaded by the Mayor’s office, aspires to reduce the city’s annual greenhouse gas pollution by 50% by 2030 [4].  According to the Mayor’s office, “the [Port recently calculated its own greenhouse gas emissions inventory… [and] has also been increasing operational efficiency and reducing its environmental impact through a voluntary program called Green Marine and a clean-diesel program with the EPA.” [4]  Additionally, the Port system is working with the State of Louisiana’s Coastal Master Plan to address accelerating rates of coastal land loss, which eliminates much of the natural storm protections from which the Port currently benefits.” [4] 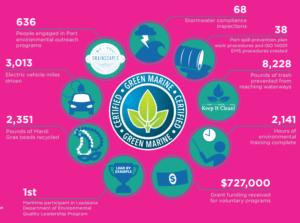 While it is commendable that the Port is working towards minimizing its own contribution to the overall climate change problem, the organization must take a more active approach to adapting its operations for changes that are already inevitable. Studies show that over the next 15 years, higher sea levels combined with storm surge will likely increase the average annual cost of coastal storms along the Eastern Seaboard and the Gulf of Mexico by $2.0 – $3.5 billion. [5]  In an effort to mitigate these costs and protect the current operations of the Port system, I recommend the Port take the following steps in the near to medium term:

Of course, it is easy to suggest what may seem like obvious action items, but then the resulting questions become: how will the Port fund these capital-intensive solutions?  Will the residents of Louisiana be amenable to increasing their tax burden to help pay for the protection of the Port? Can the Port expect any involvement or support from their business partners in these expensive efforts?  (Word Count: 747)

Student comments on Big Nightmare for the Big Easy: The Effect of Climate Change on the Port of New Orleans