When Donald Trump recently called NAFTA the “worst trade deal ever made,” General Motors paid close attention to the President’s attacks on the agreement, and with good reason. [1] Over the 23 years since the North American Free Trade Agreement (NAFTA) was signed, General Motors has relied on NAFTA to relegate labor-intensive production to its four Mexican factories and develop a supply chain highly contingent on Mexican-produced parts (a Chevy Silverado built in Indiana today, for example, has 51% of its parts from Mexico). [2] [3] Over the same period, Mexico’s total light vehicle production has more than tripled, from 1.1 million units in 1994 to approximately 3.5 million units in 2016, in large part due to NAFTA. [4] 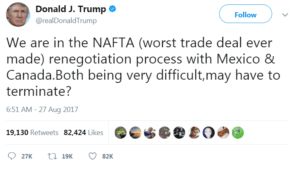 This free trade between the U.S. and its neighbors to the South has also helped Detroit-based manufacturer General Motors achieve financial success: with GM driving to record profitability and all-time high share prices in 2017. [5] Thus, President Trump’s recent NAFTA call for renegotiation, which could impose high tariffs on Mexican-made automobiles and mandate that 50% of parts in U.S. vehicles come from the U.S., comes at a time where the spotlight on GM’s financial performance is high. [6] As an August piece for the Harvard Business Review noted, eliminating NAFTA would end the uninterrupted access between North American markets for General Motors, prompting the “need to radically rethink its localization and sourcing strategy” and likely leading “to closing factories, seeking new sources for inputs, and raising prices to mitigate higher production cuts.” [7] Understandably, this would be very expensive to both GM and its employees: the Motor and Equipment Manufacturers Association and American Automotive Policy Council recently estimated these moves could cost Americans 24,000 jobs and auto manufacturer’s $10 billion in costs (Bain estimated the total profit impact to be $4.4 billion; General Motors holds a ~17% U.S. market share). [8] [9] [10]

How has GM reacted to this potential political and financial hailstorm?

Since Trump’s election in November of 2016, General Motors has pursued public, short-term appeasement to the President’s January 2017 call for GM to “make [cars] in the U.S.” [11] Just two weeks after Trump’s tweet, the company announced an additional $1 billion investment in U.S. manufacturing operations, pointing out in the same press release that the investment followed “$21 billion GM has invested in its U.S. operations since 2009.” [12] 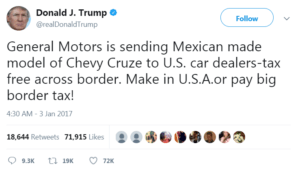 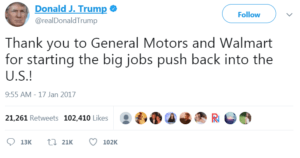 However, GM has not wholeheartedly relented to the President’s demands to bring operations back to the U.S., recently fighting the potentially damaging effects of a NAFTA renegotiation as trade talks have ramped up over the past few months. Chief Financial Officer Chuck Stevens recently acknowledging “some risks” to GM from NAFTA negotiations, prompting a partnership with Ford and Fiat-Chrysler through the American Automotive Policy Council to openly lobby against NAFTA changes in Washington. [13] [14] The company is hoping to capture the sympathy of Republican and Democratic congress members alike, reminding them that added supply chain costs and tariffs ultimately lead to fewer U.S. jobs.

What are GM’s plans for the long-term in Mexico?

General Motors appears to be staying put in Mexico, with no publicly-announced changes to its long-term strategy. Early this year, Chief Executive Officer Mary Barra told reporters that the company’s small-car Mexico production would stay, citing the difficulty of making changes to plant investments and the “long-lead” and “highly capital-intensive” nature of automotive manufacturing with decisions being made with years-long time horizons. [15] Barra has backed up this rhetoric with action, as well, recently prompting the September strike of 2,750 employees at GM’s Ingersoll, Ontario plant when GM announced that 600 jobs would shift from Canada to Mexico. [16] While President Trump may continue to lament this U.S. manufacturer utilizing labor and manufacturing capabilities across the border, General Motors appears to be betting that his bark is bigger than his bite.

While I believe General Motors has treaded nicely between placating President Trump’s U.S.-made public relations agenda and its obligation to its shareholders and employees to maximize profits through a NAFTA-enabled supply chain, management would be wise to continue publicly trumpeting continued investments in the United States and the aforementioned negative impacts changes to NAFTA would have on jobs and profitability. The January 2017 $1 billion U.S. investment by General Motors largely silenced President Trump (he has not tweeted directly at General Motors since) and educating the public on the somewhat counterintuitive, net negative effect of NAFTA on the U.S. auto industry’s employees appears necessary to help build public pressure to avoid wholesale changes to the trade agreement’s automotive components.

Some important questions linger for General Motors: if NAFTA dissolves, is the right answer for General Motors to dissolve Mexican operations or simply burden itself with incremental tariff costs that shareholders and consumers would ultimately bear? Can General Motors compete with Japanese and European manufacturers in a post-NAFTA world?

Sustainability at Unilever: Nebulous or Critical?

Climate change – Will the Contrarian or the Conformist strategy survive?

12 thoughts on “Beware the Trump Trade: Why Trump’s Attack on NAFTA is a Call to Arms for General Motors.”