If you’ve stepped into a U.S. grocery store to find strawberries for a smoothie or blackberries for a pie, you’ve noticed Driscoll’s bold branding on your produce. Driscoll’s is the world’s largest berry producer [1] and prides itself on its “producing only the finest berries” through a network of domestic and foreign farms. However, the company may have some turbulent times ahead if isolationism affects its supply chain in two ways.

Labor Pains: Because of a shortage of American labor willing to perform the physically-taxing and meticulous work of picking U.S-grown berries in time for the market [2], Driscoll’s and other farms have become dependent on foreign migrant labor to harvest ripe produce. For example, over 160,000 temporary workers were admitted to the U.S. to harvest berries and other crops under this fiscal year’s H-2A visa (for temporary agricultural workers), a 20% increase over the prior year [2].

As the Trump administration considers curbing immigration to protect American jobs, Driscoll’s stands to lose a sizable proportion of its labor force if the H-2A visa program is cut and could see lower berry output from its U.S. farms. Because of berries’ short picking window and the intensity of labor required for the harvest process, even a week or two of labor scarcity could cause large-scale waste and rot on Driscoll’s farms. Under such circumstances, Driscoll’s would be unable fulfill its obligations to its grocery store customers and consequently to anti-oxidant lovers like me.

Produce Woes: In addition to its dependence on foreign labor, Driscoll’s grows about half of its produce across the border in Mexico. Two decades ago, Driscoll’s decided to extend its planting season by moving south of the border, where berries could be grown countercyclically and then exported to the U.S. during winter months [1].

Because of similar actions by other U.S. farmers and the freedom provided by NAFTA, the U.S. fruit imports from Mexico have increased significantly, per the example of strawberries below: 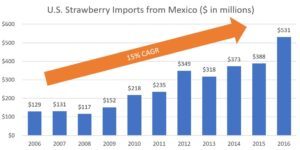 However, President Trump has hinted at tariffs of up to 20% to penalize Mexican goods imported into the U.S. to fund the proposed wall on the U.S.-Mexico border [5]. Under such a policy, Driscoll’s might reduce the load of Mexican berries it imports in the winter months, since its cash flows would be negatively impacted by the additional costs imposed by the tariff. In an alternate scenario, even if the company were able to pay the tariff to import the same quantity of berries as in the pre-tariff era and passed on the price increase to consumers, it could see decreased demand, and thus a negative impact on cash flow.

So, what are they doing…?

In the medium term, Driscoll’s is attempting to improve the harvest process by growing berries in substrates that can be raised to waist level [6]. This makes the berries quicker and less physically-taxing to pick, making the otherwise labor-intensive jobs more attractive to domestic workers and potentially increasing the company’s labor pool. 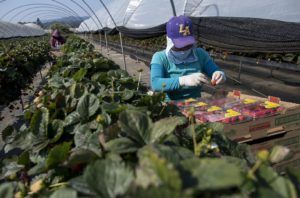 In the longer term, Driscoll’s is partnering with a company called AgroBot to build a robot to automate the berry-picking process, thus reducing the need for both foreign and domestic labor [6]. The future technology could be even more powerful if it can be combined with substrate-grown berries which are inherently easier to pick.

And what could they do…?

It’s unclear how the company is addressing the threat posed by proposed tariff; I believe Driscoll’s (and other U.S. farms with Mexican operations) could lobby to ensure that the tariff isn’t imposed by highlighting the higher prices that U.S. consumers would have to pay for produce. In addition, current headlines about immigration reform have mostly addressed illegal immigration, but it’s unclear what the path forward will be on visa programs that allow seasonal workers to work legally for Driscoll’s. As such, proposed lobbying could also ensure that temporary agricultural workers are included in protected visa categories under the reform, helping to prevent labor-led supply interruptions.

If the 20% tariff is imposed, Driscoll’s could export its Mexican-grown berries to alternate markets if evidence shows that demand is sufficient in such areas [7]. With China’s growing importance to global trade, for example, it’s not a stretch to imagine that it could absorb some of Driscoll’s otherwise U.S.-bound exports, assuming transportation costs aren’t prohibitive.

Can Agrobot’s robots truly replace or supplement human labor in a short while, given that they are currently “missing 1 in 3 berries” after years of development? [8]. In addition, has Driscoll’s considered adapting its berries species to improve their ability to grow in the winter, which could mitigate import-related risk during that season?