The petrochemical industry is consuming more than 30% of all industrial energy use, making it the largest industrial consumer of energy. (Deger Saygin, 2009) Reducing greenhouse gas emissions in the form of CO2 and HCF are critical to enable a reduction in climate change impacts.
BASF is currently a major player in the petrochemical industry with a worldwide footprint. BASF currently produces large quantities of chemicals utilized in various downstream industries including textiles, automotive, waste water treatment and power generation.
BASF – Environmental Initiatives
BASF started its environmental initiatives by setting goals for 2020 and adhering to these goals.
• Energy Intensity Reduction: BASF has reduced its electricity and steam utilization at chemical production facilities using state of the art systems developed for its production processes. 70% of BASF’s energy comes from its combined heat and power facilities and waste heat recovery units. (BASF, 2016)
Figure 1: BASF energy consumption and sources 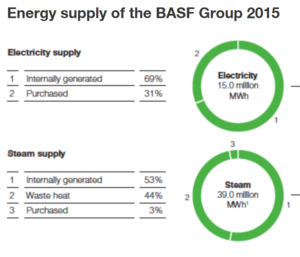 • Water Reduction: BASF has focused its efforts on reducing the amount of runoff nitrogen by 80% into water streams. Additionally, BASF has introduced many innovative water recirculation strategies in its production sites to reduce make-up water for its processes. (BASF, 2016)
• Renewable Raw Materials: 5.8% of all raw materials for production are from renewable sources. Additionally, BASF has instituted programs to waste materials from one production process into other production processes. (BASF, 2016)
Policy is one of the strongest motivators for an industry to react to climate change. BASF has publicly supported and signed COP21’s L’Appel de Paris (Paris Pledge for Action) alongside 800 non-state members.
One recent example of the Chemical’s industry coming together to drive policy change in accordance to climate change was realized this past October in Kigali, Rwanda where many companies negotiated into legislature to move away from HCF’s (hydrofluorocarbons). This is a vastly used chemical for refrigeration that is extremely harmful for the environment. The chemical industry was motivated to the legislation given new products that could have not competed with HCF if the legislation was not in place. Legislation in this case has helped chemical companies compete more environmentally friendly innovations. (New York Times, 2016)
Making your Yoga Pants Green:
Large volume chemicals, known as Intermediate Chemicals are used by various every day products. These chemicals today are sourced from non-renewable resources. Think of your yoga pants made of Spandex (Lycra). Spandex is primarily made of BDO 1,4. BDO 1,4 has historically been sourced and produced using naphtha or propylene (Figure 2 for Production Pathways to BDO). BASF has licensed a new technology to make BDO 1,4 out of dextrose and sugars. This new technology from a company named Genomatica has enabled BASF to create an identical renewable chemical.
Figure 2: Production Pathways to BDO 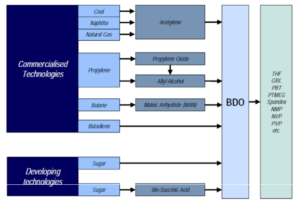 BASF today is the largest producer of BDO. It has an installed global capacity of 650,000 tons/year. With the Genomatica License, BASF will be able to produce 50,000 tons / year of renewable BDO.
The benefits of renewable BDO (European Commission: From the Sugar Platform to biofuels and biochemicals, 2015):
1. Cost competitiveness: Competitive at oil prices of $45 / barrel; typically OPEX are 15 – 30% lower than current fossil fuel BDO production
2. CAPEX: Technology is based on fermentation, making the technological process not as capital intensive as other chemical manufacturing sites
3. Greenhouse Gas reduction: Depending on electricity and process the GHG reduction can be around 70 – 117% as compared to non-renewable BDO
Success of this technology:
Genomatica has successfully licensed this technology to two major players, BASF and Novamont. Novamont has recently opened its first commercial facility with this licensed process, investing over $100 Million Euros. Additionally, Genomatica has produced commercial levels of BDO at the Tate & Lyle facility demonstrating the capabilities of its processes. (Genomatica Press Releases, 2016)
Figure 3: Novamont renewable BDO facility 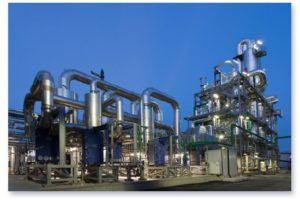 Conclusions on sustainability, cost and efficiency
Drop in ready renewable chemicals, like renewable BDO 1,4 are a way to reduce greenhouse gases and our dependence on fossil fuel sources for production. We do however have to keep in mind that some renewable feedstock can compete with food sources or be cost prohibitive. For the success of these projects we must invest in R&D that enables cost competitive solutions that do not compete with essential food production. Additionally, to reduce greenhouse gases the efficient use of resources such as electricity, steam and water is extremely important.
(741 words, excluding references)