The Canadian banking system has been heavily disrupted by digitization in the past few years, despite the fact it has been operating in a regulated oligopoly. The global banking industry has been operating with similar products and procedures for decades, but now digitization is disrupting the banking industry on many fronts: on one end of the spectrum it changes how retail customers access funds, statements and loans but on the other end it also changes the way corporate clients raise money. National Bank of Canada, one of Canada’s charter banks, has been responding to this digital transformation in many ways.

In today’s banking system, the physical local branch is becoming more and more obsolete, as customers are moving towards online and mobile solutions. In fact, several “fully-digital” banks, with no physical presence whatsoever, have come to existence offering their clients higher interest rates on deposits due to their low staff requirements.

National Bank of Canada, despite having to manage some “legacy” customer business, is embracing digitization throughout its retail system. From direct deposit of cheques through smartphone pictures, to full mobile access to funds and mobile money transfer capabilities, as well as full mobile trading of stock and bonds, NBC’s operating model now relies on digital solutions rather than staff-heavy bank branches. In fact, NBC has significantly updated its branches’ layout in the recent years, going from a transaction-heavy environment (deposits, withdrawals, etc.) to more of a customer-centric advice center. New branches, which are much smaller in size, have lounges with IPADs and customer service representatives available to discuss banking services as opposed to old branches with large transaction counters and clerks. Below is a picture of a new NBC branch layout: 1 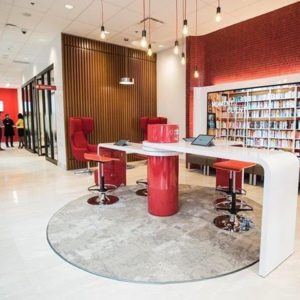 With customers demanding convenience and digital solutions, National Bank of Canada has adapted its operating model to provide access to its different products without having to visit a local branch, and has changed the purpose of its existing local branches significantly, moving away from day-to-day transactions which are now processed digitally, but rather focusing on advice and high touch financial products. With a digital banking adoption over 75% in Canada2, NBC is hoping that its operating model change will provide cost savings and growth opportunities in the future. 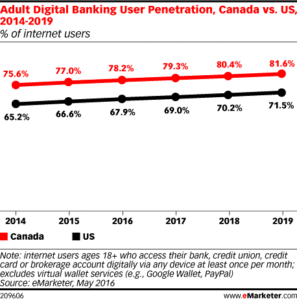 National Bank of Canada is the Canadian bank with the largest portion of revenue and earnings generated from its “financial markets” division, or from its non-retail clients. In a digital world where capital and information is flowing more freely, the agent, bank or intermediary in the capital-raising process is becoming less relevant. In fact, there has been an increasing pressure on commissions charged by NBC and by all other banks to raise equity or debt capital for its clients, as clients realize the commoditization of such services.

In response to such pressures driven by digitization, banks such as NBC need to turn towards offering more value-added services to its clients to be able to charge high commissions. As companies are looking to raise capital in a more efficient manner, large entities such as the Toronto Stock Exchange are investing heavily in new offerings, such as bank-less crowdfunding platforms which would enhance the flow of capital from investors to ideas, reducing the friction currently caused by banks3. NBC is beginning to look at how it can embrace the digital transformation for its non-retail clients as well as it did for its retail clients. As a starting point, NBC has partnered with Ulule, a crowdfunding platform which entered the Canadian market in 2015, in an effort to better understand this new trend4.

Despite NBC’s efforts towards addressing digitization, there are still some work to be done to fully convert its offering to a digital model through time. I understand that this needs to be done through time to protect its legacy business from eroding, but I also believe that a first-mover advantage in the non-retail segment would be valuable. In fact, I think an online platform which would offer a hybrid version of crowdfunding and investment banking services to connect investors and issuers seems to be a solution to connecting capital and issuers in a friction-less digital model. NBC has been very successful in adapting its retail business to the new digital world, and now its financial markets division needs to follow the lead.

We DO have that in stock: Levi Strauss brings the Internet of Things to stores

Student comments on Banking on Digitization