Ball Corporation is one of the largest metal packaging manufacturers in the world. Ball’s packaging is used in the food, beverage, household goods, and aerospace industries. On Feb 19th, 2015 Ball Corporation entered into an agreement to purchase Rexam PLC. Rexam PLC is a large multinational manufacturer of metal beverage cans and is headquartered in London, UK. The two companies have some overlapping products and regional coverage.  As a result, there are many opportunities to eliminate waste through lower overhead, sourcing, freight, logistics, and storage costs. Additionally, the acquisition lines up well with the company’s “Drive for 10” strategy and will serve to better align Ball’s operating model with their business strategy.

Ball Corp. currently has 14.5K employees across its facilities worldwide. Ball maintains a continuous improvement program and encourages the sharing of best practices across its locations.  Further, as transportation is a large portion of Ball’s operational costs, the company has worked to create an extremely efficient and “lean” supply chain.  Ball has done this by investing in specialized transportation equipment to decrease logistical 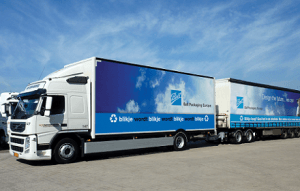 costs.  In France Ball invested in an extra long, higher efficiency truck fleet that allowed more cans to be shipped per truckload and reduced the trips to one customer by over 1,000 per year.  In the Netherlands, a special fleet carries 56% more cans per truckload and has effectively reduced travel by 160,000 km per year and fuel usage by 30%.  Further, Ball focuses on building strategic long-term supplier relationships.  Unlike some competitors, Ball does not operate a “tactical” supply chain but uses its relationships with suppliers to drive improved efficiency and coordination. For example, Ball works with its metal suppliers to design new lighter weight metals that can be used to manufacture thinner, lighter cans, resulting in significant savings:  “In 2014 and 2015, we plan to save 30,000 metric tons of aluminum in our global beverage can operations through lightweighting efforts”.

Nevertheless, Over the last few years, Ball has struggled with maintaining its gross margin as well as its management of working capital. Ball has encountered difficulty expanding into

new regions because competitors with local distribution have an advantage on freight costs – which make up a significant portion of delivered cost in this industry.

Rexam has 55 can plants spread between 20 different countries and had about 8K employees. Some major benefits of the merger between Ball and Rexam include $300M of cost synergies within 3 years of operations.   Of the $300M in savings, the largest portion is $132M in savings from the elimination of redundant general and admin. expenses. These savings will include the planned closure of Rexam’s London headquarters, which will be relocated to Ball’s Colorado headquarters.  In addition, Rexam’s non-executive directors will be expected to resign.

$96M of savings are expected from increased sourcing standardization and improved buying power through consolidated purchasing of materials.  Another $66M is expected from reduced logistical, freight, and warehousing costs internationally.  Both Ball and Rexam maintained extensive international distribution networks pre-merger and the deal will allow the company to serve some of the same customers with fewer resources. Finally, another 2% of the expected savings are from the sharing of best practices across the new company – expected to improve production efficiency. Additionally, improved working capital management is expected.

The Results (so far):

Ball is in the process of completing its acquisition of Rexam and the full benefit of the cost synergies aren’t expected to take effect until three years after the combination. However, as the acquisition progresses, many of the proposed synergies should begin to materialize.  That being said, significant cost reductions have yet to be implemented (starting Q4 2016) and profitability has been flat since the announcement. In the interim, Ball as had some success improving its management of working capital.

From a business perspective, the Ball/Rexam deal makes a lot of sense. Ball will now have access to Rexam’s customer and geographic network. Previously, there was some geographic overlap between the two firm’s footprints but also several regions without overlap. Acquired plants will allow Ball to better service customers in regions it wasn’t previously able to reach – lower shipping costs will allow Ball to be much more competitive with regional players.  The acquisition will also add complementary product lines(aluminum bottles and specialty cans) to the Ball portfolio – expanding its offerings and allowing it to be a more well-rounded supplier to its customers.

Additionally, the acquisition lines up well with the company’s “Drive for 10” strategy which identified 5 “levers” for management to focus on.  Three of these levers will be supported with the acquisition:

Ball has been struggling to maintain industry competitive margins and maintenance of its working capital while achieving geographic growth.  The acquisition of Rexam will give Ball the efficient distribution and plant network necessary for them to successfully enter new markets, will give them additional bargaining power with their suppliers and customers, and should bring many cost savings to improve margins.

Additionally, the new deal gives Ball several new
complementary product lines.   As a result of the merger, Ball will be a larger, more global, and more competitive player in the metal packaging space.

Student comments on Ball and Rexam: $300M in cost synergies? CAN they do it?