The insurance industry shows growing concerns in the face of Climate Change future challenges. Insurance companies are the main businesses impacted by the three financial risks associated with Climate Change: Physical risk, Transition risk, and Liability risk [1]. The Physical risk is observed through the increase in climate-related damages such as storms, floods or even tsunamis that have dramatically increased insured losses since 1980 (Figure 1) [2]. In particular, in 2017 alone in the US, Hurricanes Harvey, Irma and Maria caused nearly $300 billions in losses and damages, more than twice the amount of all damages caused by hurricanes in the last 10 years [3]. The Transition risk to a low-carbon economy directly impacts insurance companies which hold large investments in coal, oil, and gas companies. The Liability risk comes from the fact that some people or institutions that have suffered from climate damages will try to hold accountable other people and organizations that will see these losses covered by insurers.

Moreover, populations face greater concerns of both climate change reality and the limited ability of governments to address it, and increasingly seek initiatives to collectively address the problem, up until their daily lives, including the type of insurance purchased promoted by 87% (Figure 2) [4]. Therefore, climate change represents both a challenge and an opportunity for insurance companies.

2012 Survey among 13,000 people across 13 countries led by AXA in partnership with the research institute IPSOS

Going forward: between Commitment and Research

Insurance companies face a double activity. One is to offer insurances services and advice to clients, another is to invest the funds they receive for greater returns. Both are correlated and impact AXA’s strategy to cope with climate change.

AXA undertook a series of short-term commitments to address this new reality:

AXA also invested in medium and long-term projects to both prevent and monitor climate-related risks. First, they initiated through the AXA Research Fund 5 projects with professors from various university to:

Second, they invested in parametric insurance to increase their time and cost efficiency. [7] One of their first projects was with West African countries facing increasing risk of droughts in the region. By offering them insurances that could capture real-time satellite pictures of their greening level, AXA could anticipate the drought up to 6 months before and take immediate actions without having to send experts in locations difficult to access (Figure 3) [8]. The main effect is the possibility for AXA to cover the insurance upstream in order to avoid famine or worse, political crisis. 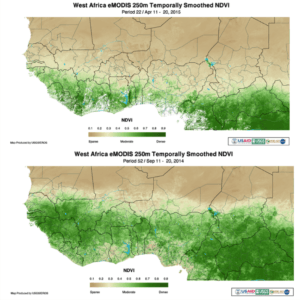 Second, parametric insurances have proven their efficiency, especially in areas where large portions of lands face high climate-related risks. Therefore, AXA should expand parametric insurances to countries in Asia and South America. During this process, AXA should also increase their investments or acquisitions in big-data and insurance start-ups focused on climate risks, like their recent investment on ClimateSecure.

Third, AXA and insurance companies, in general, must seek greater support from governments. To do so, they should pressure governments to meet their commitments made in international conferences and increase awareness among populations on real-time events to boost pressure on their governments.

What other concerns for AXA?

Recent years have shown an increasing dominance of the GAFA. They own more data than any other companies and have therefore the ability to predict, forecast and address the same issues related to climate change as an insurer. In this context, how should an insurance company anticipate or react the possible entry in the market of a potential big competitor?

The second question I have is how far the scope of insurance companies should cover in the face of climate change damages?

Between a Rock and a Hard Place: How BlackRock is Winning the War on Technology