Aviva is one of the world’s largest insurance and pensions companies, managing approximately $350bn in assets. As an old company, able to trace it’s routes back to the late 17th century, Aviva is all too aware of the impact that long term risks have upon their operating model and they recognise that there simply is no greater risk than climate change.

The insurance industry rests upon the discipline of actuarial science, which uses statistics and mathematics to make probabilistic assessments of the risks which they, through the issuance of products to customers, expose themselves to. Insurers and pension companies face a delicate balance to ensure that they manage their assets in a manner which enables them to meet their future (and uncertain) liabilities. Aviva have taken an industry leading role in incorporating climate risk into their modelling. An Economist Intelligence Unit (EUI) report, sponsored by Aviva, states that a staggering $4.2trn dollar’s (in net present value terms) worth of assets are at risk to climate change by 2100, should current mid case 3°C temperature rise predictions occur [1}. Terrifyingly, in a downside scenario, with a 6°C temperature rise, the EUI predicts roughly $43trn is at risk, which they state is just a little below half of the market capitalisation of the entire world’s stock-markets. Such numbers are simply far too large to ignore for a company which already has many liabilities on their balance sheet (such as pensions), which are in the tail end of such a timeframe.

In 2015 Aviva committed to investing £500m annually into low carbon infrastructure [3]. Unlike traditional asset classes (such as equities and fixed income), investing in low carbon infrastructure is no simple matter of public exchange based trading. With cap and trade markets having failed globally, institutional investors have to go to great lengths to put money into the sector. This has led to changes within Aviva’s operating structure, as they have had to hire professional expertise internally and develop a new network of external professional relationships to facilitate their deployment of cash in the sector. An interesting element of this is the UK Pension Infrastructure Platform, of which Aviva is an active participant [2]. This third party asset manager, owned jointly by several large pensions companies in the UK, effectively pools specialist resource to enable these large institutions to invest in the asset class without having to create full entirely new teams in-house.

In addition to directly investing in low carbon infrastructure, Aviva have pledged to consider climate change in all their voting activity as a shareholder across their portfolio of investments.

Whilst little public information is available on this, Aviva, as reported in the Financial Times [4], have stated that they “have identified an initial set of 40 companies where Aviva has beneficial holdings and which have more than 30% of their business (by revenue) associated with thermal coal mining or coal power generation”. For such companies, Aviva intend to use their shareholdings to pressure the management teams of their investee companies to adapt their business plans to tackle climate change. To support this initiative Aviva have resourced a dedicated team of professionals. Whether such actions can realistically be taken without entirely destroying shareholder value is greatly questionable however and so I think that it is it is more likely that Aviva will turn to their backup plan, to sell their positions.

Aviva has set itself ambitious targets to reduce the emissions it generates to 50% of 2010 levels by 2030 and, as of summer 2016 had already achieved a 39% reduction [5]. They purchase 62% of their worldwide electricity consumption from renewables sources and generate electricity through solar arrays onsite in three locations in the UK.

What more they should do 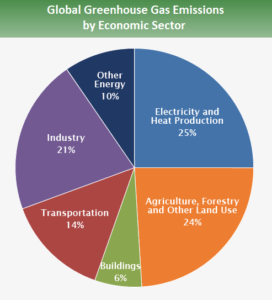 Aviva’s prominent stance on climate change should be applauded, and the very real actions which they are taking may well lead to a sweep of institutional investor driven climate change action. The scope of such action to-date has, however, been far too narrow. Power generation ultimately plays only a small part in global emissions and if Aviva are really to lead change they need to turn their attention upon other industries, such as transportation and agriculture, in which their undoubtedly also hold positions. They need to use their power as long-term shareholders to pressure management teams to adapt their business plans and actively support the new businesses which are creating solutions to our problems. As with renewable energy, this may well require them to change the way that they recruit and organise their investment professionals.

[1] The cost of inaction: recognising the value at risk from climate change, Economist Intelligence Unit, 2015, available at: https://www.eiuperspectives.economist.com/sustainability/cost-inaction/white-paper/cost-inaction

Student comments on Aviva – How to insure against the ultimate risk?