JB Hunt (JBH) is the third largest trucking company in the U.S. [1]. In 2016, the trucking vehicle class represented 20% of emissions in the U.S. transportation sector and accounted for the largest increase compared to 2015 [2]. Primarily driven by financial incentives and government regulations, JBH has been investing in fuel efficiency. While fuel efficiency plays an important role in reducing greenhouse gas (GHG) emissions, trucking companies like JBH also need to be considering operational efficiency, an increasingly critical issue with the rise of e-commerce and looming introduction of autonomous vehicle technology.

JBH’s recent focus on the environment has been driven by three factors: government regulations, the financial benefits of using more fuel-efficient technologies, and the desire of its customers for more environmentally friendly supply chains (e.g., Wal-Mart – a major customer of JBH) [3]. However, JBH does have an additional reason to help slow global warming, as its business can be negatively impacted by climate change-related events. In fact, in the third quarter of 2017, it failed to meet earnings expectations and cited Hurricanes Harvey, Irma, and Maria as a root cause [4].

Some of JBH’s ongoing fuel efficiency measures include limiting the top speed of vehicles, equipping vehicles with more aerodynamic bodies, and encouraging fuel-efficient driving behaviors [5]. In 2016, the Environmental Protection Agency (EPA) introduced its second phase of fuel efficiency regulations, mandating a higher standard that must be reached by 2027 [2]. While JBH has been consistent in its support and adherence to fuel efficiency measures, it has not set GHG emissions goals. In 2015, a proposal to do so was rejected by its board and 83% of shareholders [6]. JBH advertises a “Carbon Calculator process” on its website, but only displays its emissions reductions relative to a no innovation scenario [7]. This is a deceptive precedent under which JBH could improve fuel efficiency, while still emitting more GHG overall. 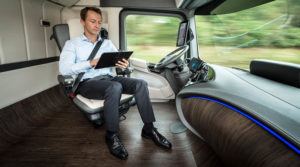 Growth of JBH’s vehicle fleet and revenue should not be discouraged; however, as market conditions change and new technologies are introduced, JBH should more closely examine how to minimize its impact on the environment. The rise of e-commerce has been accompanied with more frequent deliveries that get to customers in less time [8]. Working to meet the demands of behemoths like Amazon and Wal-Mart could lead to less efficient operations in the form of trucks that operate below capacity. To date, labor conditions have constrained this, as major trucking companies including JBH have had trouble maintaining cost-efficient work forces. In addition, increasingly strict regulations limit the hours each driver can work [4]. This has made the prospect of autonomous trucks incredibly enticing. In 2017, JBH co-founder John Roberts stated, “Autonomous trucking is very real. We will be very active in testing” [9]. Reliable timelines are difficult to come by, but most major car manufacturers are aiming for commercialization in the 2020-2021 time-frame [10,11]. An unlimited, cheap, and autonomous labor force is undoubtedly attractive given market conditions, but the downside isn’t difficult to see either. It’s easy to envision a market where trucking companies take “Just-in-Time” to the limit, with trucks operating constantly, oftentimes below capacity – a nightmare scenario for the environment.

JBH should start preparing for such changes now by developing meaningful metrics, setting goals, and working with the government to get ahead of future industry dynamics. As a first step, JBH should make and report out on GHG goals. While this will demonstrate they aren’t trying to deceive the public, a more relevant number to follow is GHG emissions per unit of available capacity delivered. This metric accounts for their improvements in fuel efficiency and efficiency of their operations. It shouldn’t be just a number that is tracked, but a number that drives business decisions. This could become difficult if competitors are less mindful of the environment, which is why JBH should start working with the government and the rest of the industry now on regulations that go beyond just fuel efficiency and discourage inefficient operations.

New industry conditions present an interesting dilemma. JBH could be an early adopter of autonomy and race to acquire the largest customers by potentially compromising on operational efficiency. Alternatively, it could partner externally to get ahead of the problem. Should it take on that burden or let the government assume responsibility while surging ahead with autonomous vehicle testing?

Autonomous trucks offer an intriguing value proposition. Proponents argue they will have positive environmental effects, citing fuel-efficient driving behaviors and the ability to drive closely behind each other (drafting). If true, does that excuse any operational inefficiencies created in the name of customer convenience? In reality, modeling the eventual effect is extremely difficult, but inaction now could result in having to be reactive to environmental damage once again. Should preventative action be taken or is waiting to see the true effect more appropriate?

[8] Hamid Moghadam, “Delivery is Getting More Complex, but Will Soon Be Faster and Cheaper,” Fortune, September 1, 2017, http://fortune.com/2017/09/01/supply-chain-manufacturing-technology/, accessed November 2017.

Rio Tinto: Be Prepared for the Flood

Cleaning Up Cobalt: Who Is Responsible?