The coal industry has been devastated over the last 6 years while coal executives have clung to the past. Refusing to accept the facts of climate change, they have stuck to their core business, blamed partisan politics and fallen into bankruptcy one by one. Murray Energy has managed to hang on by establishing a dominant cost position and becoming one of the few surviving American coal miners. Can CEO Robert Murray shift his mindset to capture new opportunities in the energy industry? Or will Murray go down with its peers, too blinded by partisan anger to accept the facts of climate change and invest for a sustainable future?

Since 2011, the market cap of publicly traded coal companies has dropped 94% (1). During this time more than three dozen coal companies have filed for bankruptcy protection (2).  In a recent interview with Fox Business, Robert Murray, blamed “crony capitalism” and politics for the “virtual destruction” of his beloved industry (3).

There are three major factors that have contributed to this decline; climate change regulation may have been the final stroke.

1.) Lack of demand for Metallurgical coal exports to developing economies

In 2010-2011, many coal companies took on debt burdens to scale up operations for a bet that Chinese demand for steel would continue to drive coal prices higher. The demand never materialized and metallurgical coal prices have fallen precipitously leaving many of these companies unable to service their debt (1). This bet went badly for many industry players, but they may have survived the shock if not for two other headwinds.

2.) Coal is the heaviest CO2 emitter per unit of energy and the consensus around climate change is strong

The intergovernmental panel on climate change has published six assessment reports since 1990 which conclude that human caused carbon emissions contribute to global warming. Broad acceptance of these reports is signaled in several recent agreements and legislative actions. In April 2016 representatives from 200 countries met in Paris and reached agreement to reduce GHGs (4), Obama endorsed the EPA clean power plan, and to date 29 states have signed renewable portfolio standards which require a reduction in GHG intensity on their grids.

The pressure on CO2 is mounting and coal, the highest emitting energy source, is the low hanging fruit. This is not a partisan argument, it is a practical one.

3.) Natural gas is cheap, clean(er) and is rapidly replacing coal for baseload generation

Coal has long been the dominant source of electricity on the US grid, it is cheap and plentiful, so its position as 50-60% of generation, has been safe for 60 yrs. With the advent of hydraulic fracturing and the development of US natural gas resources, coal’s position is being challenged. Pressure on CO2 and falling gas prices make Natural Gas an obvious choice. 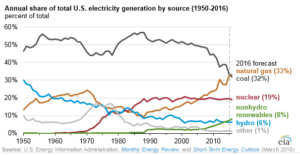 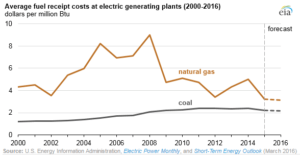 The coal industry has blamed democrats and the renewable energy industry as the source of the coal industry’s problems, but these claims are not supported by fact. Investment in renewables has been meaningful, however even though a majority of new generating capacity added last year was renewables, the increase of Natural gas generation on the grid was nearly 21x that of renewables. 2016 is predicted to be the first year in history where Natural Gas will replace coal as the dominant provider of electricity on the American grid.

Murray Coal has survived for now
Murray coal has survived while many of its competitors have filed for bankruptcy protection. The key to their success is the leadership of CEO Robert Murray who understands that “the only way to get out ahead is to watch every penny and be the low-cost producer” (5).

The industry has already laid-off 140k people and is unlikely to see a return to a grid dominated by coal (3). However, there may be interesting opportunities for Murray to grow, deliver value to shareholders and re-employ many of the “family” he has had to lay off.

A study from the journal of energy economics shows that the “growth of solar-related employment could benefit coal workers, by easily absorbing the coal-industry layoffs over the next 15 years and offering full-time careers” (6). Perhaps Murray could invest in worker training and add an energy services business?

Black hills energy, a diversified energy company, recognized the regulatory / environmental risk in coal and augmented their portfolio with a natural gas acquisition in 2008. Perhaps Murray could diversify by acquiring other commodities such as natural gas resources before its too late?

Will the coal industry and CEO’s like Robert Murray move past their ideological anger and prepare their businesses for the next 50 years?

Whoever Taught You Oil and Water Can’t Mix Was WRONG

Starbucks: Impact of Climate Change on Your Daily Cup of Coffee

Student comments on Are partisan politics and crony capitalism to blame for the decline of the coal industry?