“Climate change is one of the great challenges of our time, and the time for action is now…The transition to a new green economy requires innovation, ambition and purpose. We believe passionately in leaving the world better than we found it and hope that many other suppliers, partners and other companies join us in this important effort.” Tim Cook, CEO of Apple

Apple is a publicly traded consumer electronics, software, and online services company. Valued at over $580B[1] with over $215B in revenue for FY16[2], Apple has dedicated itself to cutting carbon emissions.

While still a debated topic, climate change is a serious problem facing the future of the earth. Amongst several issues, greenhouse gas (GHG) emissions have increased dramatically and resulted in a drastic increase of average global surface temperatures of 0.9˚C (Exhibit 1). 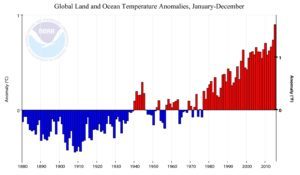 In an effort to do its part in stopping climate change, in 2013, Apple appointed Lisa Jackson, former head of the Environmental Protection Agency, to lead its efforts to minimize its impact on the environment. As of 2015, Jackson is the VP for Environment, Policy, and Social Initiatives.[4]

Under Jackson and Cook’s leadership, Apple has focused on 5 main areas to minimize its carbon footprint: manufacturing, product use, facilities, transportation, and recycling.[5] Exhibit 2 provides the breakdown of each area in the entire carbon footprint. 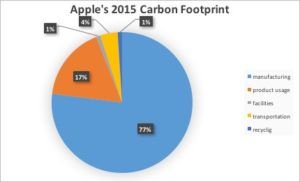 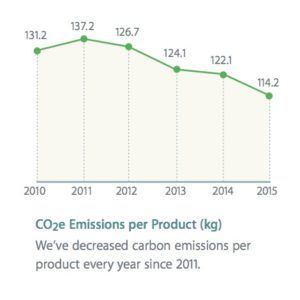 At 77% of its total carbon footprint, manufacturing is a large focus point for Apple. Jackson’s team identified two main areas to reduce emissions from manufacturing: electricity used in manufacturing and raw materials production.

Where does electricity go toward during manufacturing? Raw materials processing, product assembly, and parts manufacturing, amongst others. Electricity use in manufacturing accounts for over 60% of manufacturing emissions and is the biggest source of Apple’s carbon footprint.[7] After 13 energy audits in its facilities in China, Taiwan, and Japan during 2014, Apple identified 244 million kilowatt-hours of potential reductions opportunity. Of these, its supplier and facilities have already reduced over 13,800 metric tons of CO2 equivalents.

To offset manufacturing emissions and cover the energy used by Apple products, Apple plans to build 200 megawatts of solar projects in China. One of its key suppliers, Foxconn, is installing 400 megawatts of solar projects in the Henan Province by 2018.[8] In addition, Apple is encouraging its other global suppliers to install more than 4 gigawatts of new clean energy. In total, Apple management estimates that these projects will avoid over 30 million metric tons of carbon pollution.[9]

Until recently, Apple had used aluminum that was produced using fossil fuels. Now they’ve switched to aluminum smelted using hydroelectricity and changed the manufacturing process to reincorporate scrap aluminum. Apple reports that this change has resulted in an enclosure whose footprint is half compared to the previous iPhone generation.[10]

Now at 1% of total carbon footprint, facilities comprise a small slice of Apple’s carbon footprint pie. Since FY2011, Apple reports that carbon emissions from its facilities have decreased by 64%, avoiding over 1 million metric tons of CO2e.[11] As of January 2016, 93% of Apple’s global facilities, including data centers, corporate offices, and retail store, are run using renewable energy for electricity.

These goodwill pledges were shortly followed by a successful COP21 in Paris in December 2015 that resulted in the adoption of The Paris Agreement[16]: all signatories pledged to keep global temperature increase well below 2˚C this century to ultimately limit the temperature increase even further to 1.5˚C.[17] In 2018, nations party to the Agreement are to evaluate their efforts and progress towards the goals set in Paris. In light of this renewed global commitment to preserving our environment and stopping climate change, Apple has made many strides, especially in its most recent commitments to solar energy installations, but still has a long way to go. Next on its agenda should be innovative methods to reduce its paper use, especially in packaging, and complete elimination of the toxic substances in its devices, along with specific care taken to reengineer and optimize its recycling processes.[18]

BREAKING THE ICE: IS FEDNAV TURNING EMISSIONS INTO OPPORTUNITY FOR THE SHIPPING INDUSTRY?

TESLA: Accelerating the Transition to Sustainable Transportation for the Masses

10 thoughts on “Apple: Reducing emissions, one target at a time”