“We believe in living in the world better than we found it, and that’s why we’re on track to meet our goal running our entire company on renewable energy”

In April 2013 at the The White House Summit on Cybersecurity and Consumer Protection, Tim Cook, Apple’s CEO stated with determined voice that Apple will pursue the goal of running its company 100% by renewable energy [1]. The motive of the determination is widely perceived as Tim Cook’s commitment to lead the tech giant building a more sustainable world [2], while some regard it a response to strengthen Corporate Social Responsibility following public criticism, such as Greenpeace’s report in 2012 “How Clean Is Your Cloud”, criticizing Apple to power its Cloud operation mainly with fossil fuel and nuclear energy [3].

Apple’s determination is not alone, in recent years, 100% renewable energy adoption has become a “fashion” commitment to some of the most influential companies in the world, creating significant Corporate Social Responsibility benefits. There have been 116 companies signed up for the RE100 initiative, aiming at using 100% renewable energy by certain timeframe, including numerous technology companies such as Google, Facebook, Adobe, BT and HP. [4]

However, shifting to 100% renewable energy may not be entirely under Apple’s control. By 2016, manufacturing activities accounted for ~77% of Apple’s comprehensive carbon footprint, in which mostly is from Apple’s suppliers’ production, product usage, transportation and recycling accounted for ~24%, with ~1% from corporate facilities [5]. Pushing suppliers to adopt renewable energy was particularly difficult, given it required additional investment from the suppliers, which likely would transfer to the costs of components. Apple needed to consider carefully how to incentivize its suppliers to adopt renewables without compromising on component costs or quality. 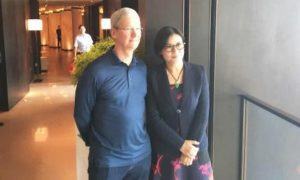 By April 2017, Apple has installed 485MW of clean energy by itself while 7 suppliers have committed to use renewables for Apple’s product production by 2018.

Although The Clean Energy Program has demonstrated initial success, the upcoming challenges is expected to be even more difficult. The seven committed manufacturing partners are mainly categorized into three types: (1) Major suppliers which has large sales volume depended on the Apple’s order (2) Suppliers selling commoditized products, e.g. mechanical components. As they are easier to be replaced and are in severe price competition. “Being Green” seemed to be their chance to build competitive advantage (3) Local companies which want to create marketing and brand image. Except these types, suppliers have less incentive to adopt renewable energy and will likely become bottleneck to Apple’s goal.

In order to attain Apple’s goal of 100% renewable energy, Apples shall consider different approaches providing stronger incentive to suppliers, such as: (1) including renewable energy adoption as one of the supplier selection criteria, on par of product quality and cost (2) investment in renewable energy assets to offset supplier’s non-renewables consumption, either by self-installation, by being shareholder of renewables assets, or by purchasing carbon credits (3) providing financial support to help suppliers overcome initial investment hurdle. This approach can be creative such as loan provided by Apple or other financial partners, or self-support funds provided by Apple’s suppliers network which mostly have existing business relationship already.

For Some, Finding A Match Is About Life And Death