From fundamentally protectionist campaigns of world leaders such as President Trump’s ‘Buy American’ and Prime Minister Modi’s ‘Make in India’ to isolationist decisions of developed nations such as ‘Brexit’ – the global economy is becoming increasingly protectionist. Tax breaks to companies which “import jobs” back, deliberate currency fluctuations to make a country more favorable as an export market are commonly becoming employed ploys by national governments.

Protectionism is aimed at protecting local producers, jobs and businesses through tools such as tariffs on imports, subsidies, tax cuts etc. Protectionism proponents argue that governments should frame economic policy which caters to domestic audiences, while critics consider such policies to be short-sighted and incapable of addressing issues of growth or unemployment.

India has historically been protectionist, especially when it comes to its retail sector, which is 98% unorganized and a major employer of local labor. The government has feared that a surge in Foreign Direct Investment (FDI) in retail might hamper local employment. However, over the last decade, steps have been taken to gradually increase FDI across various sectors, including retail. Current FDI allowances for most sectors range from 49% up to 100% [1].

The allowances for the retail sector still stand at a staggering 49%. For proposals involving FDI beyond 51%, the laws mandate at least 30% sourcing to be done domestically [2].

Apple in India – a victim of protectionism

Apple entered India a decade ago primarily focused on selling its flagship product – the iPhone. As per Indian FDI laws, Apple was not allowed to set-up any retail store unless it sourced over 30% parts domestically [6]. The iPhone was almost wholly manufactured in China, due to lower costs. This forced Apple to go-to-market in India mostly through “authorized resellers”.

In the last decade, Apple made several petitions to the Indian government to relax regulations for FDI and/or permit them to open retail stores [5]. However, the protectionist Indian government has time and again, disallowed it. Apple also petiti 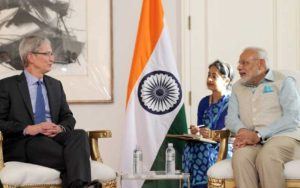 oned to sell refurbished iPhones in the Indian market themselves. That was also denied on grounds that it could make India a “dumping ground” for old technologies.

Finally, in May 2016, Apple CEO Tim Cook had a series of meetings with the Indian government on how Apple’s relationship with India can be best taken forward. The outcome of those negotiations has resulted in Apple initiating the assembly of iPhones locally in Bangalore, India in May 2017 [7], with further expectation of setting-up full-fledged manufacturing soon. In lieu of this commitment to “Make in India”, Apple anticipates a potential exemption from FDI regulations and/or reduction in prohibitive import duties.

Like Apple, many multinationals have given into protectionist government policies to stay competitive in India – for e.g. Walmart, Starbucks etc. However, there are certain aspects of this “corporate-government interplay” which remain important questions:

From Harvard to HarvardX: Are we there yet?

Student comments on Apple combats with Protectionism in India