Apple is one of the rare cases in which a company’s product reaches so deep into people’s lives. Customers, suppliers, and competitors look to Apple as role model in terms of its core value. At Apple, people believe in leaving the world better than we found it, and this include taking care of our planet and be thoughtful of our future. In fact, thirteen leading American companies have announced $140B in low-carbon investments last year at the Paris Climate Summit. 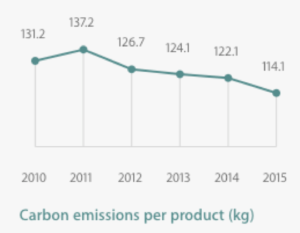 Two major areas related to manufacturing have big impact on carbon footprint: raw material production and electricity used during manufacturing. Apple works with a broad range of supply chain to process raw material, make electronic components and assemble the final product. In recent years, Apple has been working with strategic partners around the world to reduce their energy use, power factories with clean energy, and build renewable energy projects. Apple is currently the biggest owner of solar farms in the world with 200 megawatts of solar in China, 170 megawatts solar project in Inner Mongolia and a 130 megawatts solar project in California. In addition, Apple has worked with suppliers to install more than 4 gigawatts of clean energy worldwide. Over the next two years, Foxconn will install 400 megawatts of solar to cover energy use in its Zhengzhou assembly factory.

In addition, Apple is getting smart with the raw material that it uses to build its devices. For example, Apple has reengineered its manufacturing process to reincorporate the scrap aluminum, which was smelted using hydroelectricity rather than fossil fuels. As a result, Apple cuts the carbon footprint associated with the aluminum enclosure of iPhone 6s in half compared with the previous generation.

People love to use Apple devices every single day. All the energy that takes to power an Apple device counts as carbon footprint. Apple has developed new ways to make its products as energy efficient as possible. Both Mac and Iphone have sleep mode that runs the processors at extremely low power when the users are not active. Since 2008, Apple has reduced the average total power consumed by Apple products by 64 percent. As an ex-Apple hardware engineer, I can testify the rigor that we put into designing the system to be power efficient. It is one of the most critical metric in system performance design.

The newly rolled out Apple service, including Siri, Apple Music, iCloud or anything cloud related are handled by Apple data center servers. They are running on 100% renewable energy! 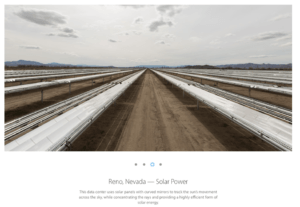 100% of electricity use in Apple’s global facilities – offices, labs, retail stores, data centers – are powered by renewable energy in countries like US, UK, China and Australia. The company is at 93% worldwide as of January 2016. As an living example, Apple invested in a 40 megawatts solar farm in my hometown Sichuan Province in China, and connected the new solar energy to the National electricity grid, producing more than enough electricity for all Apple’s offices and retail stores in China.

Apple’s new spaceship campus, which I witnessed its construction, will be the most energy-efficient building in the world. By recycling or reusing more than 95% of the material from the demolished buildings, Apple is able to find ways to repurpose all the raw material.

Because Apple has a unique base in Asian supply chain, the global business operation relies on transportation of hundreds of millions of products, mostly by Air. This consumes a great amount of energy. The logistic team works very hard to optimize the air and ocean shipping more efficient so they use less fuel. In addition, by making devices lighter and packaging smaller, the emission is reduced.

Recycling is critical to reduce overall carbon footprint. By recycling materials such as aluminum than by mining and smelting new materials, fewer carbon emissions are created.

During the course of Apple’s initiative to combat climate change, it had fierce debate with some investors who felt the economics does not make sense. Our CEO Tim Cook, bluntly said that any investor who does not align with Apple on fighting climate change should sell out Apple stocks. It speaks loudly the challenges that our society face to balance ROI and social impact. It sometimes takes forceful leaders to enable the change that is required.

Climate Change as a Competitive Advantage for an Oil Major

Student comments on Apple: Climate change is real, and time for action is now