In an increasingly globalized world, uncertainty about the future of employment has contributed to growing fear and anger in communities across the U.S. The loss and outsourcing of manufacturing jobs have reignited calls for protectionist trade policies. U.S. tech companies have been unwillingly forced to the forefront of this conversation, and Apple is no exception. Currently dependent upon offshore manufacturing, Apple is receiving pressure to reshore outsourced jobs from abroad. 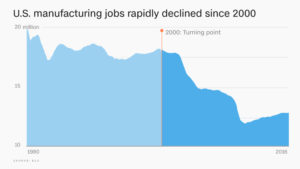 President Donald Trump has publicly called upon Apple CEO Tim Cook to reshore jobs from China, supporting his campaign promise to revitalize U.S. manufacturing [2] [3]. These calls have contributed to a politicized debate about the role of tech companies in a shifting era of trade economics. Though economic theory suggests that offshoring increases global productivity, visible job loss across the U.S. has led to calls for more immediate solutions [4].

The growing trend toward trade isolationism poses a number of threats to Apple. By some estimates, a decision to move iPhone manufacturing back to the U.S. could cost the company over $4 billion [5]. However, if Apple doesn’t act, it risks furthering the sentiment that the company is no longer working in the best interests of American citizens. This narrative has already drawn unwanted media attention, including President Trump’s public declaration to impose stricter regulations on tech companies.  Trump’s promise to return to an era of “America First” have manifested in a move to more tightly regulate the H-1B visa program, which provides work visas to 65,000 foreigners a year [6]. Apple is one of numerous companies that relies upon this program to fill jobs.

Apple’s management team has not sat idly by in response to these allegations. In May of this year, CEO Tim Cook announced a $1 billion fund to invest in advanced manufacturing [7]. Cook stated that the fund is intended to foster American job creation, with a focus on better equipping Americans to take on manufacturing roles in quickly changing industries. The company also announced plans to invest in education to teach Americans coding skills, though it remains vague on specific plans to enact these programs [8]. The announcements were accompanied by a marketing campaign focused on the positive economic impact Apple has had in the U.S., with the company showcasing its domestic job creation metrics with a fresh web page [9].

In a longer-term bet, Cook is also bartering with the Trump administration in the hopes that Apple’s public signal of commitment to American job creation will be met with favorable tax policies. The administration’s recent tax reform proposal would lead to tax breaks on over $230 billion in corporate profits being held offshore [10]. In essence, Apple is negotiating its concession of job reshoring for more favorable long-term economic policies.

To further combat these challenges, Apple’s management should double down on investment in digital education and software development skills to prepare the next generation of workers. The National Association of Manufacturers estimates that over the next decade, nearly 3½ million manufacturing jobs will likely be needed, and 2 million are expected to go unfilled due to the skills gap [11]. By preparing children and young professionals with programming skills now, Apple can help to increase the number of workers hired domestically in the future. The company currently operates its “Hour of Code” program, which supplies free online content to allow anyone to teach coding basics in one hour, but deeper investment is needed [12].  Apple should partner with trade schools and community colleges to institutionalize curriculum that will better prepare students for software development and advanced manufacturing roles. These actions will also work to support the brand narrative that Apple is good for American workers.

In executing this strategy, Apple faces two major risks: 1) a perception that its actions are ingenuine, and 2) the potential to be seen as bending too far to government demands. However, these risks are worth taking on, as a strengthening narrative of the company as un-American and anti-competitive would be far more damaging to its ability to operate as an unrestricted entity in the future.

As Apple strives to balance its goals for long-term growth with growing calls for isolationist trade policies, it must tackle a number of unanswered questions:

Coming to America: Foxconn and “Offshoring” to the US Rust Belt

Tyson Foods: Can One of the World’s Largest Food Companies Break a Destructive Cycle?

Student comments on Apple: a homecoming from abroad?