[1] The Apple App Store radically altered the way people buy and receive software. Launched in 2008, the App Store has been a huge success for Apple thus far.  As of July 2016, there are over two million apps on the App Store, which have been downloaded 130 billion times since the App Store launch.[2]  That’s a lot of games of Candy Crush.  However, Apple’s constant iOS upgrades cause challenges in the form of performance issues and increased work for the app developers.  How can Apple motivate developers to continuously spend time and money on updating all these apps?

By 2008’s App Store launch, Apple had become experts at digital distribution via the iTunes store, which began the process of acclimating consumers to spending money on pure digital content rather than purchasing a physical CD or DVD.  The App Store presents a different spin on this business model.  The App Store contains a digital marketplace, making third-party apps convenient, immediate, and accessible.  Unlike the iTunes store, which sells already created media, the App Store relies on developers motivated to create iOS content.  Apple takes 30% percentage of the revenue of an app.[3]  The developers gain 70% revenue and access to millions of instant customers, which allows developers to create overnight successes, such as Rovio’s Angry Birds or more recently the summer hit, Niantic’s Pokémon Go.  The App Store’s operating model involves the distribution of the content and the maintenance of the App Store standards.

Overall, apps have provided $50 billion revenue to developers.[4]  Although that sounds impressive, the majority of app developers don’t make much money: “72% make less than $5,000 per month and 51% make $500 or less.”[5]  One issue comes from pricing: while apps were often at least $0.99 in the earlier days of the App Store, nowadays free-to-play apps have become the norm, which further hinders the ability for developers to make enough revenue to cover their development costs.

Once an app is released, however, the developer cannot just sit back and watch the revenue come in.  Whenever Apple upgrades its software, app developers must update their apps to keep the compatibility up-to-date, or else take down the app.  This presents a problem for both the customer and the app developer.  Although an increasing number of apps are free, many include in-app purchases. The price paid does not entitle one to a “permanent” product.  I looked at the Terms and Conditions for a few apps and noticed that app developers often include the right to suspend or disable access to the app at any time “without notice.”[6]

If an app does not function, a customer can report the issue, after which Apple might refund the customer in the case of “technical problems [that] prevent or unreasonably delay delivery.”[7]  However, a refund does not solve the customer satisfaction piece.  How does a customer feel when a beloved app becomes inoperable?

For example, a popular videogame, BioShock, was re-developed for iOS by developer 2K.  However, when Apple upgraded to a new iOS in mid-2015, the game no longer functioned, leaving frustrated customers with a broken game.[8] 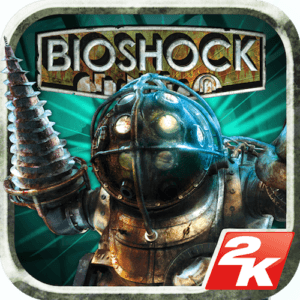 As of November 3, 2016, the game is still unplayable and 2K removed the game from the App Store, noting on the 2K website, “We are working to update the game as soon as possible to include iOS version 9 compatibility.”[9]

In June, 2016, Apple announced “improvements” to the App Store, including stricter clean-up by aggressively removing dysfunctional apps.  Developers are given 30 days to fix the app before the app is deleted.[10]  Removals during October increased by 238%.[11] 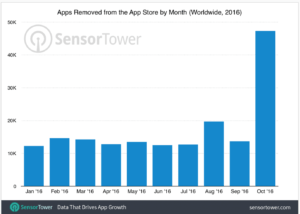 Apple also launched new initiatives for developers to increase market share, such as introducing ads in the search bar.[13]  Additionally, Apple will incentivize developers with apps that have a subscription model, motivating them to keep updating their apps: if a subscribing customer stays for a second year, the revenue becomes an 85-15 split (instead of 70-30).[14]  However, this financial incentive only covers subscription-based apps, a model which lends itself well to certain types of content (such as media/news) but not others (such as games).

Ultimately Apple needs to provide more support for non-subscription-model apps and help provide ways for old apps to continue to function with new iOS updates, perhaps through emulation of the old iOS within the app.  Apple needs to be more aware of the effect it has on developer costs whenever the constant digital software updates come along.  Otherwise, app developers will be less financially motivated in the future to continue to create quality apps.  Customers will be more wary when they purchase or pay for services in apps, and less likely to spend money, creating a vicious cycle of lower overall revenue.

[5] Phil Johnson, “How to make money as an independent developer,” IT World, August 6, 2015, http://www.itworld.com/article/2957215/development/how-to-make-money-as-an-independent-developer.html, accessed Nov 2016.

Student comments on Appily Ever After? A Digital Distribution Challenge