I’ve spent most of my life eating Thanksgiving turkey that was overcooked.  “Better safe than sorry” was the mantra my mom and dad used when cooking meat; especially poultry.  Their caution stemmed from the harmful pathogens that are found in almost all poultry [2].  Symptoms of eating under-cooked turkey can range anywhere from a tummy-ache all the way to death [2].  Cooking meat to proper internal temperatures destroys the nasty pathogens that could kill you [3].

The Anova precision cooker combines the best of French-modernist sous vide cooking with Silicon Valley smartphone technology.  The combination yields a cooking experience so simple, that anyone can make restaurant quality food in their home.

Sous Vide (pronounced sue-veed) is a cooking technique that came about in the 1970’s.  It was an important innovation in the cooking space because it allowed chefs to achieve precise internal temperatures with their foods – without the risk of overcooking.  The cooking method involves submerging meat (or veggies), vacuum sealed in a plastic bag, into a water bath that is heated to the appropriate temperature (typically between 130 and 145 degrees).  The meat sits in the water bath until its internal temperature rises to the temperature of the water bath.  Since the submerged meat can’t get hotter than the temperature of the water bath, it can’t overcook.  The result is a tender succulent piece of meat that retains more natural flavor than traditional cooking methods yield [4].

The popularity of sous vide cooking grew slowly initially, despite its desirable results.  Today though, it is one of the leading food preparation trends in the restaurant space [5]. 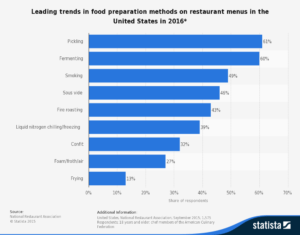 Anova saw there was a growing segment of amateur chefs interested in using the techniques of world class chefs.  Anova also saw a gap in the way that consumers interacted with kitchen appliances; everything from our home thermometer to our garage door can be controlled from our phones – why not our kitchen appliances?  Anova took its idea to Kickstarter and raised $1.8 million dollars in funding to launch its product – the Anova Precision Cooker [6].

Anova generates the bulk of its revenue through product sales.  The precision cooker currently runs between $130-$200 depending on which model you buy, and where you buy it (the 900 Watt model goes for $169 on Amazon [7]).  However, the value proposition of the Anova precision cooker extends beyond the physical product and into the digital space.  Downloading the free app unlocks the digital value.

First, the mobile app gives owners the ability to start, stop, and control the temperature of the precision cooker directly from their phone – whether they are at home, or across town.  In addition to running the precision cooker the app also has a library for new recipes, tools to share and save recipes, as well as video tutorials [8].

Anova is betting that by bringing control of the cooker into customers’ smartphones, it will integrate into its customers’ lives more seamlessly.  It’s also betting that by providing free recipe content it will make its product stickier for customers when the time comes to upgrade or replace old cookers.  A benefit to Anova, is that data collected from the app could be used to inform future upgrades and innovations.

One critique of the precision cooker is that the smart phone control and recipe library are gimmicky, especially compared to how consumers traditionally interact with kitchen appliances.  In a world where smartphone users expect to link everything to their phone though, I think that smart phone connectivity is quickly becoming the standard.  As far as the recipe feature goes, sous vide cooking is a very niche space without the same following as more traditional methods (e.g. grilling); because of this, being able to share and receive recipe content with other users is actually a large value add.  I think that Anova should take the sharing one step further and build an option into the app that lets owners easily share the food they make on social media.  Encouraging owners to share the food they make will help create organic marketing for the precision cooker.

Momentum for the Anova precision cooker continues to grow. Anova recently signed a deal with Target putting the precision cooker into all 1,800 Target stores [9].  As more people buy the precision cooker, develop and share recipes, and use the digital features, its popularity will continue to grow.  To me, the only question that remains to be answered is this: how would you like your turkey cooked this thanksgiving: safe-as-sawdust or precisely-delicious?

[5] Leading trends in food preparation methods on restaurant menus in the United States in 2016*. Satista. 09/2015, https://www-statista-com.ezp-prod1.hul.harvard.edu/statistics/293966/leading-trends-in-food-preparation-methods-on-restaurant-menus-us/

USPS – The Government Agency that Innovates

HBO: How Over the Top Content Providers (Netflix, Amazon, Hulu) Have Forced HBO to Transform its Business Model