When I was in middle school, only 18% of my countrymen were connected to the power grid.

Today, the Kingdom of Morocco aims at becoming the largest green-energy exporter to Western Europe.

At the heart of this incredible ambition, stands ONEE (the national power utility company, largely owned by the state) currently implementing grid-connected renewable energy systems at full industrial scale, alongside other government agencies.

Despite their marginal contribution to the emission of greenhouse gases, countries along the southern Mediterranean Seabord stand to lose the most from climate change. On the flipside of that argument, some of those countries see it as an opportunity to stand out.

Following a radical shift in government policy spearheaded by ONEE, Morocco is positioning itself to not only break away from its current crippling situation – where it stands out as the largest energy importer of the 20 countries across the region spanning from the Middle East to North Africa, and depends on foreign sources for 97% of its energy – but also to transform into a vital clean energy export hub.

In order to achieve this, ONEE decided to tap into this non-oil-producer country’s most abundant natural resources: solar, wind and hydroelectric capabilities.

Following that strategy, Noor power station (Arabic for light), sprang in the middle of the formerly useless Sahara Desert. While Noor has only completed its first construction phase (three extension phases are planned), it stands today as the largest solar plant in the world. It is actually large enough to be visible from space. 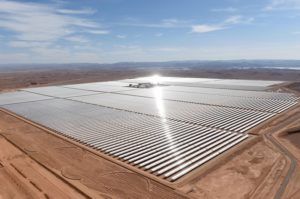 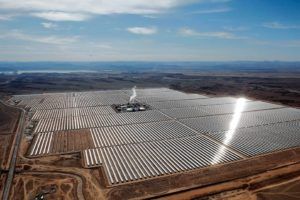 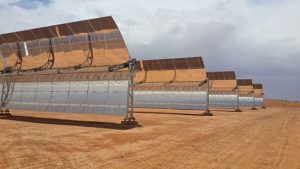 Covering an area of 450 hectares, the current extension alone is supposed to power over 1 M households and reduce CO2 emissions by 760 KTonnes per year. By 2020, Noor is estimated to reach a capacity of 2 GWatts of solar energy. Largely funded by Western institutions, this incomparable endeavor is in itself a representation of the desperate need for non-fossil energy looming over Europe for the decades to come. Worth mentioning here, the largest solar plant ever to exist, doesn’t stop delivering energy at sundown. Any excess heat is stored using molten salt technology, hence producing power 20 hours per day.

Furthermore, to reach Morocco’s objective of mitigating and adapting to Climate change, ONEE counts on other assets as well.  On top of the 300 days of sun per year that the country enjoys, wind usually speeds at an average of 9m/s alongside the 2300 mile-long coastal areas; while the inland Atlas mountains snows represent a substantial reservoir of water. ONEE became then equally ambitious when it comes to wind and hydro energy production. 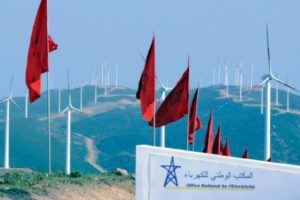 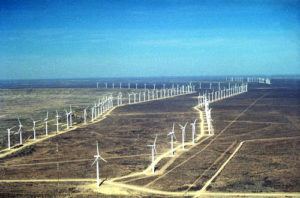 The windfarms power plan targets 2 GWatts of capacity by 2020, and is expected to offset CO2 emissions the equivalent of what is absorbed by 150 million trees per year. Spread over an area of 8,900 hectares, the windfarms consist of wind turbines of 2.3 MW capacity each.

Likely to strongly be affected both by climate change and by growing energy needs in the years to come, Morocco, through ONEE, appears to have put itself on the path to not only build a climate-resilient economy, but one of a promising potential precisely in light of the challenges ahead. While doing so, ONEE would turn a profit from exporting power to the neighboring countries for them to use in lieu of other fossil energies.

However, as the COP22 is soon to be hosted in the country, as a way of paying tribute to its avant-garde green revolution, many questions still need to be raised before calling this an outright success.

Energy insecurity in light of the challenges Climate change poses, for Morocco and its neighbors, is what triggered an investment of over 9 $Billion in the aforementioned projects. However at this stage, the issue of cost effectiveness has not been resolved yet. It appears difficult to ascertain that ONEE’s sustainable power generation will be enough to replace fossils or coal. The project will definitely have many positive outcomes for the country and its current energy dependence, however whether ONEE’s will indeed become an exporter of energy to its neighbors, thus alleviating CO2 emissions still hinges on those countries’ abilities to make a cost-effective choice. The ultimate question, hence remains, if the cost of producing fossil energy is deemed lower, how far are we ready to push the enveloppe ?