On Monday, October 29, 2012, an explosion rocked the 13th Street Power Facility near the East River, cutting off power to much of lower Manhattan.  Water levels had risen fourteen feet as Hurricane Sandy (“Sandy”) battered the East Coast in what was to become one of the worst Atlantic hurricanes on record.  The storm tide waters generated by Sandy had not been seen since at least 1700,[1] and the power station’s flood walls, which were built to withstand twelve feet of floodwater, were useless.[2]   Power would not be restored for days, as people in Manhattan operated without access to elevators, heating and in many cases, water, during a particularly cold Autumn.[3][4] 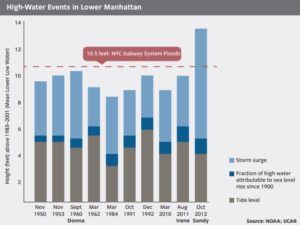 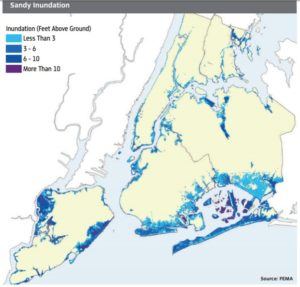 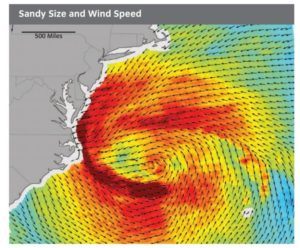 Con Edison (“ConEd” or “the Company”), a subsidiary of Consolidated Edison, Inc. (NYSE:ED), is the utility company accountable for the 13th Street Power Facility and is also responsible for providing electricity, gas and steam to most of New York City and Westchester County, NY.  It would take ConEd a week to restore power to 87% of their customers who lost it, and a total of two weeks to restore power to all of their customers.[5][6]  The infrastructure weaknesses that led to the power outages were a consequence of poor weather forecasting and institutional shortcomings at ConEd.  As climate change persists, weather events are expected to become increasingly extreme and unpredictable.  In fact, the four largest storm-related power outages in ConEd’s history have all happened since March 2010.[7]  Many of ConEd’s structures are built to withstand worst-case scenarios, but unfortunately, the bar for the worst case has moved quickly as climate change accelerates.  ConEd’s lack of foresight led to the flooding of the power facility, as the flood walls had been built using projections from outdated storm models.[8]

Further investigation uncovered other institutional flaws that led to these failures.  At the time, ConEd had a policy to “run it until it fails” which led to systems featuring old components and deteriorating physical infrastructure.  Exacerbating issues further, ConEd failed to staff sufficient manpower to conduct needed preemptive maintenance work due to a lockout of certain staff in the summer of 2012.  These problems were and still are emblematic of the issues faced by many utility companies throughout the United States.  Unfortunately, poorly managed post-Sandy repair efforts will most likely lead to future problems for the ConEd.  In the urgency of restoring service, ConEd resorted to temporary repair arrangements that were not properly documented and therefore will be near impossible to revisit.  Also, the use of out of state aid workers accelerated repairs, but sacrificed quality.  Many of the volunteers were improperly trained and not well versed in New York’s complex electrical systems.[9]

Although Sandy was an extreme weather event, it showcased how ConEd had failed to stay ahead of the possible consequences of climate change.  If ConEd is to avoid catastrophic failures going forward, it must rectify the systematic internal failures that Sandy exposed.  In February 2014, sixteen months after Sandy, ConEd committed to incorporate plans to protect its power system from the effects of climate change as part of a new multi-year $1 billion investment plan.  These “storm hardening” funds were to be deployed to areas where ConEd was especially vulnerable.  For example, Manhattan customers would receive investments in flood prevention, while mainland customers would receive protection from falling trees.  The Company revised its flood protections standard by adopting the most current FEMA hundred-year flood level estimates plus a safety cushion of three feet.  ConEd furthermore committed to undertake a study on how climate change would affect its electricity, natural gas and steam systems in the coming decades, and how to prepare for these changes going forward.[10]

ConEd financed these projects without concurrent price increases to its customers, and this drives to the heart of the challenge related to motivating preemptive catastrophe investment within infrastructure companies.[11]  Customer pricing for infrastructure companies is often restricted by government policy, therefore managing costs becomes the main avenue through which these companies can increase profitability.  Tightly managing costs most often leads to a reduction in quality.  Moreover, any capital investments are hard to value since they do not explicitly increase cash flows after completion.  By design then, it is the responsibility of the state and local governments to either mandate investments or provide incentives to invest through tax breaks or looser price ceilings.  The steps ConEd is taking to better understand its risks in the current climate environment are adequate, but still reactionary rather than proactive.  Loosening the Company’s margin constraints should hopefully push ConEd to plan not just for its immediate future, but to look forward to the next hundred or two hundred years as it anticipates the arrival of Sandy v2.0. (779 words)

Rio Tinto: The Impact of Climate Change on a Leader in the Mining Industry

Student comments on An Explosion Redefines a Worst-Case Scenario