During June 2017, a heatwave swept the state of Arizona. Temperatures soared and the mercury hovered around 120 F in the central hours of the day1.  Passengers flying out of Phoenix Sky Harbor airport (PHX) quickly found out that extreme heat is not an ally of airplanes. American Airlines was forced to cancel more than 40 regional flights out of PHX between the hours of 3:00 to 6:00 pm, since the Bombardier airplanes flying these routes are not licensed to operate above 118 F2.

When temperature increases, air density decreases, which reduces lift and makes it harder for airplanes to take off3. Longer takeoff runs mean that airlines burn more fuel, which is negative for both the environment and for the profitability of a carrier, given that fuel is one of the main cost drivers of airline operations4. 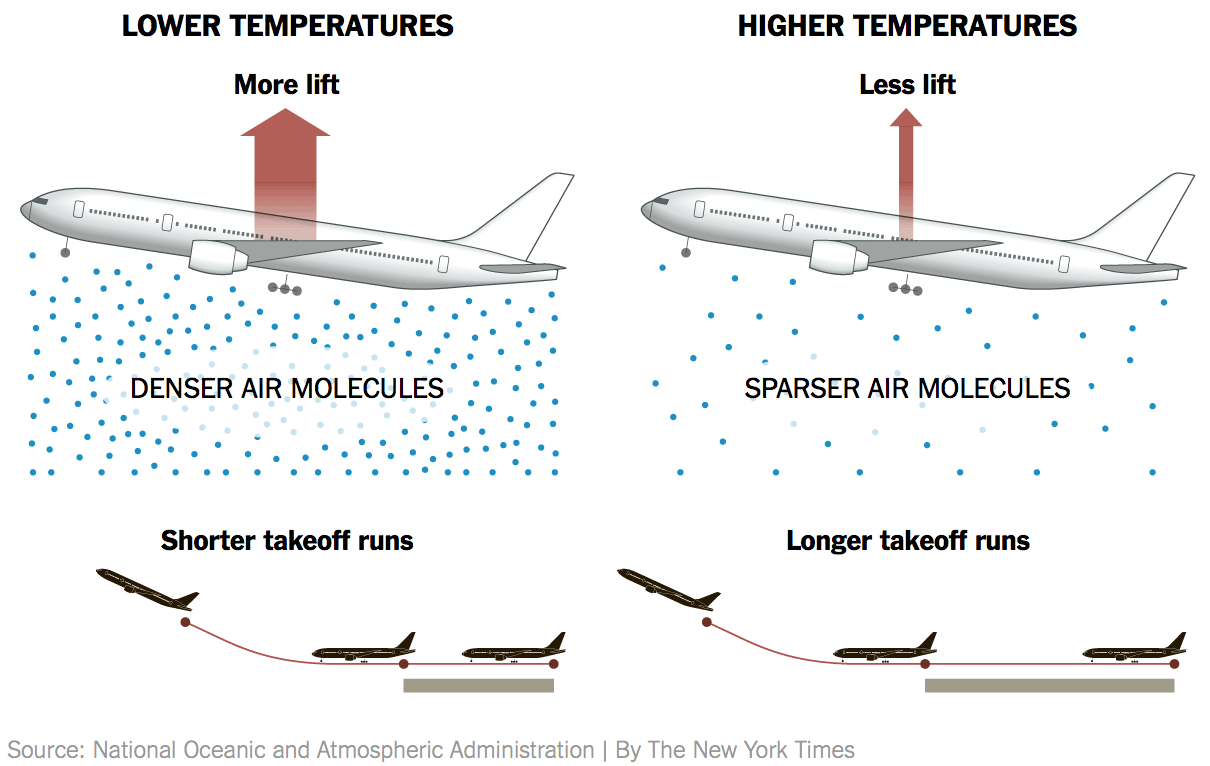 Additionally, if an airport has short runways, high temperatures might restrict the maximum weight that an aircraft can lift. This means that the plane can carry less passengers or less cargo onboard, negatively impacting revenue generated. According to a study released by Columbia University5, 30% of the flights departing during the most blistering parts of the day will not be able to take off at their maximum weight by 2050. New York La Guardia airport (LGA), where American Airlines also operates a hub, is an example of where this scenario could become a reality.

It is clear, then, that American Airlines’ profitability could be negatively impacted by climate change in the medium term, and that management should pay attention to reducing greenhouse gas (GHG) emissions and to combating associated risks.  The airline industry is responsible for 2-4% of the global emissions6, with American being the largest player globally – measured by fleet size, revenue and number of daily flights7 – and the largest user of jet fuel8.

American Airlines and its focus on reducing fuel consumption

American Airlines has, in fact, a long track record of coming up with innovative ways to reduce fuel consumption, even if the ultimate objective for these initiatives has usually been to achieve cost savings. The company is famous for saving $40,000 by removing one olive from salads9 served in the 80s or for having a “polished metal” livery in the 90s, which reduced the weight of an aircraft compared to painting it10.  More recently, American Airlines claimed that, by switching from paper to iPads, they saved 1.2 million dollars in fuel over the course of a year11.

At a larger scale, American Airlines efforts to reduce emissions in the short to medium term can be summarized as follows12:

American Airlines also announced a partnership with Ocean Park, a boutique investment bank, to develop a biofuel strategy. American is part of the global aviation coalition supporting the goal to achieve carbon-neutral growth from 2020 onward13.

Reaching the next level

While these efforts are directed in the right direction, American Airlines still has a lot of room for improvement. Some of its competitors, such as United Airlines, are already flying some commercial routes with biofuel on a regular basis14. In addition, according to Corporate Social Responsibility data15, GHG emissions generated by American’s mainline operations have steadily declined by 1% over the last 3 years. Yet, GHG emissions derived from regional operations continue to grow rate of 3-5% per annum. Regional emissions are significant, since they amount to almost 1 out of every 5 CO2 equivalent tons emitted by American Airlines.

These data suggest that American Airlines ought to review their fleet strategy for regional operations in a similar way to what is being achieved for mainline fleet. One hypothesis that could explain the current status quo lies in the fact that regional operations are managed by affiliate carriers, who may not have the same incentives or capital to modernize their fleet. American Airlines could therefore partner with them to devise a medium-term plan.

American Airlines should also introduce better reporting systems that monitored fuel efficiency, akin to those of Alaska Airlines, a leader in fuel efficiency. Better monitoring systems should translate make bigger progress every year from an economic and from an environmental perspective.

Is there a different path?

What remains to be evaluated is whether American Airlines is better off dealing with climate change by modernizing their fleet or by restructuring hub operations by, for example, converting PHX and LGA to focus cities and re-routing transfer passengers to other hubs which are less prone to disruption.

Cuckoo for Cocoa: One Confectioner’s Push for Sustainability