Amazon, the digital marketplace that aspires to sell everything to everyone, has made major investments in digital transformation – not all of which have made the headlines.

With the goal of becoming “earth’s most customer centric company,” Amazon has relentlessly reinvested in its processes to deliver more value, delivery speed and convenience to consumers. The famously taciturn company has kept much of it development inside a “cone of secrecy,” but the public evidence came in December 2013 when CEO Jeff Bezos appeared on the television news program 60 Minutes to unveil the company’s proposed drone-based delivery service.[1]  While that program has become the face of Amazon’s digital transformation, it remains years away from practical implementation. Meanwhile, technologies that dramatically improve Amazon’s operating model are in full force in Amazon fulfillment centers: namely, robots. 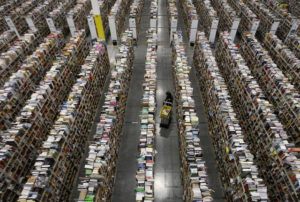 Fulfilling orders on Amazon is very physically intensive, opening opportunities for automation. Beginning with just two fulfillment centers in Seattle and Delaware, Amazon now fulfills orders for its products out of an estimated 198 in the United States and 343 worldwide.[2] In the classic fulfillment process flow, orders from a centralized database are routed to workers known as pickers. These pickers push shopping card-like trollies around the warehouses, walking over 11 miles per shift, picking up and scanning an item every 30 seconds from aisles and aisles of goods stored in an intentionally random assortment across an almost one-million-square-foot facility.[3] The path for each picker is optimized so that the next item on his or her list is in the vicinity of the previous item. Once the picker’s bin is full, he or she delivers the items to the next station for packing. 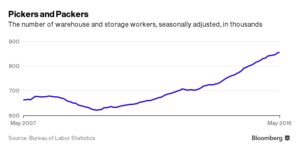 This system is filled with inefficiencies, from the time of having to locate packages one by one, to having to resort packages for shipping once they are picked. The expense of the worker’s wages (compounded by the sheer fatigue of the work) plus training costs, the time inefficiencies of manual search, and the declining benefits of the marginal worker all add up. Amazon’s solution was digital innovation. 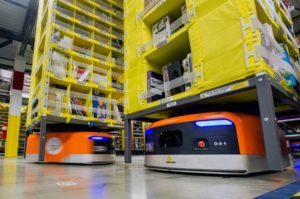 In March 2012, Amazon acquired the Boston-based robotics company Kiva Systems for $775 million dollars.[4] Kiva manufactures squat, orange, ottoman-sized automated guided vehicles, capable of lifting custom shelfs and transporting them across the warehouse. This “magic shelf” technology served as the back end of order fulfillment for many companies including Staples, Walgreens, Gap, Office Depot, and Crate & Barrel.[5] After the Amazon acquisition, all these contracts were canceled, and Kiva was rebranded “Amazon Robotics” leaving the e-tailer with an exclusive competitive edge.[6]

When an order is received, a Kiva robot navigates the warehouse by scanning barcodes on the floor to find the location of the shelf with the needed item. Once the bot finds the shelf, it goes underneath it, lifts it up, and transports the entire assemblage to the packing station. There the packer completes the role of picker and packer, by selecting the correct item from the shelf, and dispatching the bot to replace the shelf and retrieve the next one. A computer display tells the packer exactly which size box is needed to pack that particular item, and the perfect amount of packing tape is dispensed in the exact orientation needed.[7]

Where the Robots Take Us From Here

This automated system allows fulfillment centers to run on leaner staffs and turn around packages more quickly and with fewer errors than was previously possible. The next place where Amazon can work is in the demand forecasting for inventory (especially important with perishable goods as in Amazon Fresh) and in the final shipping of goods, hence the research into drones.

I can only speak for myself, but I for one welcome our new robot overlords.

An alternative to outdated schools

Unlocking accessibility to the stock market, even for the visually impaired

Student comments on Amazon: Their Most Innovative Drones Weren’t Built to Fly