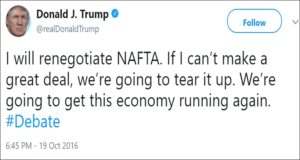 Amazon spent in 2016 $11.5B on shipping- nearly twice than in 2014 [1]. For handling an efficient supply chain, the largest internet-based retailer [2] opens new sorting centers, delivery stations and hubs. Each warehouse pools demand over a large geographical area, leading to more stable forecasts and lower total inventory [3]. Yet, Amazon aims to improve its inventory turnover of 8.13 in 2016 that is similar to Walmart’s 8.26 [4].

Lately, Amazon has targeted Mexico a growth engine [5][1]. In September 2017 it was published [6] that Amazon aims to open a 1 million square-foot mega-warehouse near Mexico City that will enable it to store 15 million products and to distribute 1 million deliveries a day nationwide. It will also enable Amazon to serve American customers due to its convenient geographic location [7].

United States’ trade with Mexico has been heavily influenced by NAFTA[2]. Signed in 1992, NAFTA has created a comprehensive structure for trade and investment [8]. However, NAFTA has not favored e-commerce: Mexicans who buy on Amazon goods in more than $50 still pay duty to the Mexican government. These policies represent a severe constraint on the ability of U.S. e-commerce platforms to achieve their full potential in Mexico [9]. If the duty free threshold is pushed, as might be proposed by the U.S in the renegotiation process started on July 2017, Amazon big-ticket products will boost [10].

Trump, elected based on his nationalist promises, has targeted NAFTA, blaming it for destroying the manufacturing industry and expanding the U.S deficit trade with Mexico [11].

Source: The Economist, based on U.S International Trade Commission and Haver Analytics 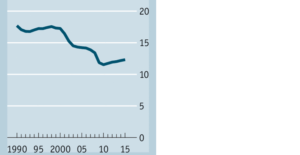 Source: The Economist, based on Bureau of Labor Statistics (BLS)

All eggs in Trump’s basket?

Making a major capital investment in a country that American trade with is based on a fragile trade agreement seems risky. Ironically, the new warehouse is located along the so-called “NAFTA” highway, an industrial belt that runs through Mexico’s factory regions to the U.S. border [12]. When it comes to the future of the U.S-Mexico trade, the consequences of the negotiation- and of additional disputes between Trump and Mexico- may be harsh. Earlier this year we had a glance at this instability when consumers launched social media campaigns urging Mexicans to boycott American based brands such as Walmart, after Trump signed an executive order for the construction of the wall [13]. This casts a serious doubt on the logic behind Amazon’s decision to build a major distribution hub near Mexico City.

The concealed assumption– to triple sales

Amazon usually builds its operational centers in regions in which it owns a solid market share and bright future. My analysis, presented in Graph 3, demonstrates that in North America (Mexico excluded) and in its International segment, Amazon’s average sales-per-Square Footage is $760 and $666, respectively. We can see that currently, Amazon’s sales-per-Square Footage in Mexico [14, 15] are $506- 24% lower than International’s. To maintain the current $506 ratio, Amazon will have to triple its current sales in Mexico to $760M. Even if we consider the company’s desire to serve the U.S market with the new Mexican hub, it seems very challenging to reach these goals. 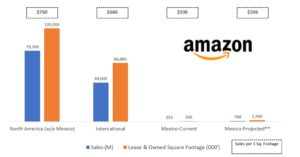 Source: Author’s analysis, based on Amazon’s 2016 financial reports and Reuter’s breakdown of Amazon’s sales in Mexico

*North America segment for Amazon included the U.S, Canada and Mexico, for this analysis Mexico’s data (derived from Reuters) were excluded both for sales and for sq. footage

**In order to preserve the $506 sales-per-Square footage, sales in Mexico will have to triple to $760M; to reach the average North America’s $760, the new hub will have to generate sales of $1.1B by serving both Mexican and American customers

One should expect that Amazon’s management will address the NAFTA risk. But it has not. Amazon’s financial reports [16] do not reflect any concerns regarding NAFTA or the U.S-Mexico tension. One might claim that since the new project deals with a single distribution center that mainly aim to serve a niche market, the risk is low and not substantive. This claim, however, is not compatible with the enormous spending of Amazon on lobbyists to make its case about NAFTA in Washington [17], probably trying to push the duty-free limit on imports.

Consequently, I will advise Amazon’s management to reconsider its decision to open a mega-warehouse in Mexico and to implicitly include the NAFTA risk within its financial reports. A long run bet on Mexico can be reconsidered when political uncertainty diminishes.

Yet, several questions remain open . It is interesting to understand whether Amazon or other online retailers faced a similar dilemma, took the risk- and succeeded. It is also significant to refine the projected results of NAFTA cancellation: Are Mexican projected to boycott American brands? Is it feasible? Finally, should Amazon reflect this geo-political threat in its reports? Is it sufficiently substantial?

Student comments on Amazon, Mexico and Trumponomics- Is the bet too high?