Coca Cola is a contributor to, and victim of, climate change

That cold Coca Cola on your desk has gone through a lot to get there.

The carbon footprint of a single 330ml can is 170g/CO2, which is the result of: sourcing and producing packaging materials; growing, processing and transporting ingredients; manufacturing, distributing and chilling the product; and recycling the empty package1. Considering products from The Cola Company’s stable of beverages are enjoyed 1.9 billion times per day globally2 it is notable that the world’s largest drinks manufacturer has established an ambitious sustainability program which “seeks to drive system wide change beyond small operational improvements…and provide leadership that will raise the bar for our system and the industry3.”

The environmental protection element of the program focuses on: responsible water use; increasing recycling of packaging; reducing the carbon footprint of each drink produced and sustainable sourcing of agricultural products.

Coca Cola is not just a contributor to Climate Change, but also at risk from its physical manifestations. The Environment Agency (a UK Government body) acknowledges that those businesses most vulnerable to the effects of Climate Change are ones which4:

The nature of Coca Cola’s business means it scores highly on all three of these criteria.  I could focus on any of the above, but the scarcity of the company’s main ingredient seems a logical place to start.

Water is becoming increasingly scarce.  Coca Cola needs a lot of it

Global water withdrawals have tripled over the last 50 years to meet agricultural, industrial, and domestic demand6.  Without action, global water demand could exceed supply by as much as 40% by 2030. Demand for water will continue to rise as industrialization and urbanization in emerging markets accelerates.  Rising global temperatures may constrict the supply of water, and a less predictable climate means there could be greater uncertainty and volatility in future supply7. 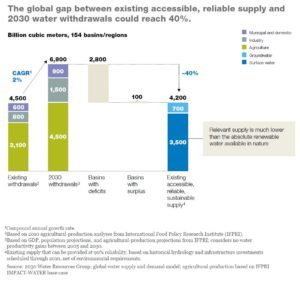 Coca Cola has experienced first-hand direct impacts to its business stemming from (perceived) misuse of scarce water resources.  In 2004 the company was forced to close a bottling plant in Kerala, India after it was accused of exceeding its permitted use of water during a time of drought8.  This caused significant anger amongst the local population, approximately 70% of whom were dependent on agriculture – and the availability of water – for their livelihood.

Coke was ultimately found to have been acting within the law, but the company suffered reputational damage and consumers deserted the brand.  This served as a catalyst for the company to adopt responsible water use as a key business priority9.

In 2007, Coca Cola committed that by 2020 it would replenish each liter of water used directly in its beverages.  In 2015, Coca Cola replenished 191 billion liters of water, which is 115% of the 166 billion liters contained in its global sales volume; the company achieved its goal five years ahead of schedule10.

You can hear more from Coke’s Chief Sustainability Officer on how this was achieved here, and here.

…but the company needs to do more

Whilst this is unquestionably a laudable accomplishment, I believe Coke needs to do more.

191 billion liters is a drop in the ocean (approximately 13%) of the company’s estimated 1,500-billion-liter total annual water footprint. Coke needs to invest time and money in partnering with its suppliers – many of whom are poor farmers located in rural areas of developing countries –  who are not well equipped to handle the pressures of a changing climate, or adopt modern, efficient, farming techniques.

Given that we expect demand for water to exceed supply in the near future, Coke still faces a real and pressing threat.  The success the company has had to date (for example technical innovation resulting in improving water efficiency of its manufacturing processes11) should be shared with other manufacturers.

As previously noted, Coca Cola is committed to “raising the bar for the industry”.  Now is the time for the world’s most recognizable drinks brand to turbocharge the role it plays in ensuring the most fundamental of all resources remains available to everyone.

[4] Business Opportunities in a Changing Climate: Managing impacts and Market opportunities (written for the Environment Agency by Acclimatise) page 11, accessible at https://www.weadapt.org/sites/weadapt.org/files/ea_report.pdf

[6] GEO-5 for Business: Impacts of a Changing Climate on the Corporate Sector, p.102-104, 436 Accessible at http://web.unep.org/geo/sites/unep.org.geo/files/documents/geo5_for_business.pdf

Is It Right to Benefit from the Apocalypse?