Since it’s opening exactly ten years ago, Chef Grant Achatz’s “rule-bending” Alinea has been named the best restaurant in the United States three times and is only one of twelve domestic restaurants to receive the coveted “3 Michelin Star” rating1. Achatz is known as a pioneer in molecular gastronomy, and continues to disrupt any conventional precept of what food can or should be. The name Alinea is the Latin name for the pilcrow (¶), a typographic symbol that is used to start a new paragraph. In Old English the pilcrow would be used to start a new idea, and this is the guiding philosophy and the character of the restaurant2 with signature courses including “The Lamb 86” with 86 different garnishes and the edible apple taffy helium balloon, see below:

In 2011, Alinea extended this distinguishable unconventialism beyond its food when it adopted a ticketing business model which is now not only radicalizing the way consumers approach dining out, but also improving operational efficiency into the notoriously low margin restaurant industry.

Prior to ticketing, servicing unprecedented demand for Achatz’s culinary genius and theatrical prix fix presentation was challenging to manage as taking reservations presented a significant cost burden for the restaurant. Alinea had to employ three full-time employees to answer the phone, most often having to say ‘no’ to potential customers given that 70% of people were requesting the same Friday/Saturday prime times4. Callers could rarely get through due to severely high call volumes and at one point, callers caused the entire 312-867 exchange to go down4. The labor and phone line costs associated with managing demand were significant, but more importantly, the system was frustrating to potential customers investing time in getting through only to discover a lack of availability. Voicemail boxes would fill up, requiring a full-time employee to retrieve and call-back customers, again often to express unfortunate news. The system lacked transparency and created mistrust from customers who would struggle to believe that the restaurant was fully booked months out on an off-night. Moreover, wait-listers (and the restaurant) were unfairly penalized by no-shows or “short-sits” (when only two people show up for a party of four reservation) which ran at about 8%, depending on the time of year4.

Given the high overhead of running a restaurant business, any time a table is empty during opening hours, the lost revenue goes straight to the bottom line. There is enormous pressure to fill tables during off hours to maintain the high overhead costs of labor, rent, etc. Alinea’s Chicago-location led demand to plummet during frigid winter months, resulting in significant losses during Q1 each year.

Nick Kokanas, a former Internet entrepreneur and investor who funded Alinea’s launch observed the shortcomings in the traditional booking process and saw an opportunity to inject transparency and efficiency with a pay upfront ticketing model; however given his lack of prior experience in hospitality, he faced resistance within the company. In 2011, the duo launched a new restaurant concept with “Next”. Every three months, Next would rotate its menu to reflect a new cuisine and era commencing with “Paris, 1906”. Given the novelty of the concept, Kokonas saw this as the perfect opportunity to experiment with the book-by-ticket process and convinced Achatz that this was the forum to do it4.

Kokonas had anticipated using an existing ticketing software platform but soon found that none would meet the restaurants needs given the difference in seating templates from those of a theater / sports event. After failing to find an existing reservations platform on the market willing to work with them, the team hired developers to design a software in-house suitable to its needs. The digital marketing ads for Next culminated with a dramatic: “Tickets go on sale soon (yes tickets)”. Leading up to opening night, 18,946 individuals had signed up to be notified when tickets went on sale. Not knowing what to expect, the team took the site live on opening day. Within the first hour, the company had secured $57,293 in sales, within the first twenty-four hours, $358,453, numbers impossible to achieve through a traditional phone-based reservation system4. Kokonas’ hypothesis had proven correct, patrons were willing and excited to purchase tickets for a dining experience. 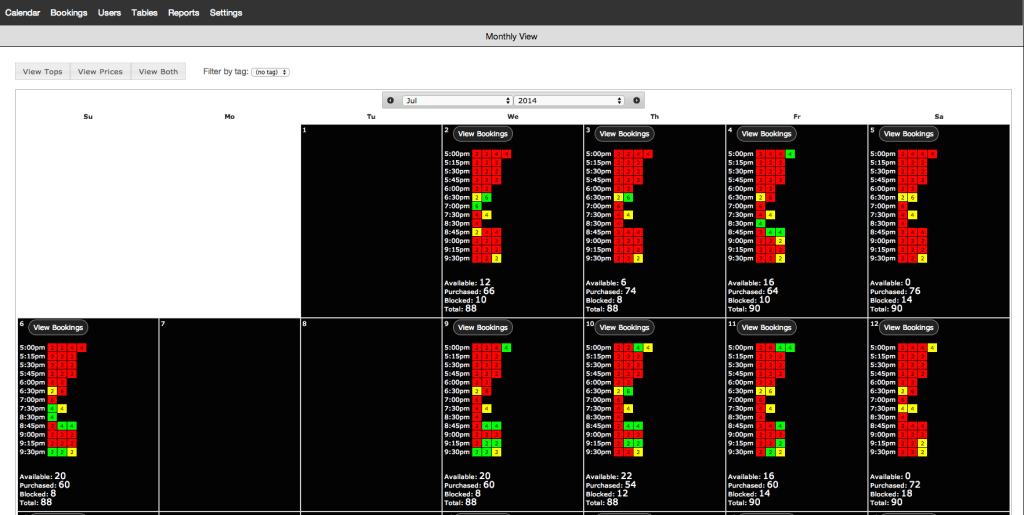 The company quickly recognized how shifting to a variably priced event-like business model could not only improve the customer experience, but better align with its operating model, resulting in significant efficiencies by: (i.) smoothing demand in off months and off hours, (ii.) reducing no-shows and short-sits, and (iii.) eliminating food waste through better visibility.

Allowing ticket prices to fluctuate depending on day, time, season, upends the traditional focus on keeping down food costs as a percent of sales. The additional revenue and bottom line uplift from stimulating demand and enhancing predictability make up for the higher food cost basis. After introducing ticketing in 2012, Alinea achieved 38% higher EBITDA margins4. Exhibit 1 below shows the decrease in short-sits and no-shows:

Alinea offers something far beyond a meal, a dramatic and innovative experience. As food becomes art, dining becomes entertainment and it is logical to realign business/operating model to reflect that of a variably-priced, pre-purchased entertainment affair.

Zara: a Retailing Force to Be Reckoned With

Terra Nova: Proving that Irregular Land Titling Can Be a Strong Business Case