Initially, capacity expanded in-line with consumption. Eventually however, the financial crisis stunted demand, but new facilities kept opening. By 2015, China had more capacity than the rest of the world and began exporting its surplus, creating a supply/demand imbalance. [2] 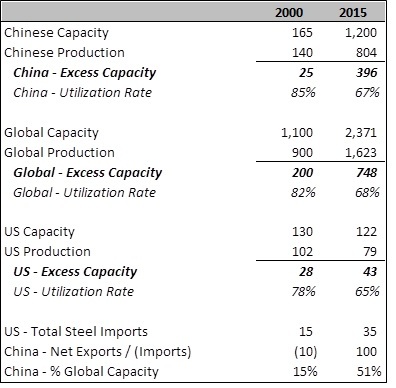 AK Steel (“AKS”) is one of four major US producers and operates both BOFs and EAFs (the others focus on one). Pre-2008, the four jostled for market share while attempting to maintain stability. Thus, steel prices generally reacted to demand and feedstock costs. [3] However, the influx of Chinese exports created a new paradigm. A customer now had a choice between a Chinese and US supplier, and would juxtapose (A) the US price versus (B) (i) the Chinese price + (ii) incremental shipping costs + (iii) a premium for longer lead times –in equilibrium, US prices would be higher than China’s by a spread of (ii) + (iii). [4] 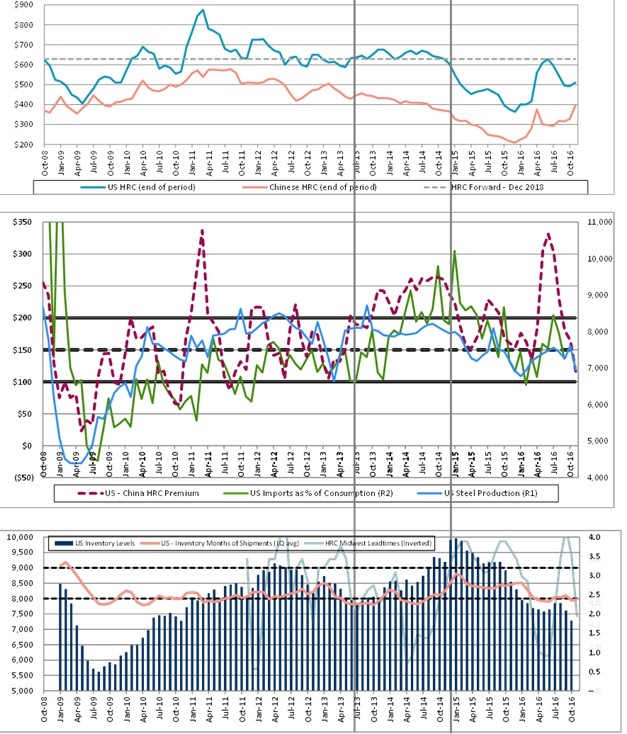 For years, this spread oscillated around ~$150: if the US charged a higher premium, imports rose, driving prices down; conversely, if the US charged less, exports fell until prices recovered. However, in mid-2013, the US OEMs refused to cede price, but since they could not lower production, inventory began to build. In Jan 2015, the OEMs caved as imports reached 40% of consumption, and prices remained depressed until the accumulated inventory could normalize. The combination of low prices and low production during the subsequent destocking led to a painful year, prompting both countries to turn to their governments.

The Chinese government did not care about profitability; their goal was to avoid social unrest caused by unemployment. Thus, “protectionism” came in the form of social financing –capital that allowed unprofitable firms to avoid closing, thus preventing the global supply glut from equilibrating. [5] Conversely, American desired protectionism was import duties. OEMs filed an anti-dumping case with the ITC, but after the election they pushed President Trump to enact duties under executive order. [6] [7] While both governments placated the local businesses, they simultaneously attempted to appease international trade principles: China committed to a capacity reduction schedule, while the US ensured duties would only follow evidence of dumping. [8] The result has been immense volatility: US steel prices have moved between $365 and $650 since 2016, and could swing $30 following a Trump comment. [9]

This uncertainty creates material production issues for AKS. Since BOF’s cannot operate at partial capacity, AKS must decide whether to operate at the beginning of each year; assuming a BOF has breakeven costs of ~$575, AKS doesn’t know if it will lose $200 or make $100/ton. [10] The decision is complicated by the high cost of idling and re-starting a plant (unions, maintenance, etc.). Additional uncertainty exists since, unlike some other OEMs, AKS imports some feedstocks, which themselves could be affected by tariffs. [11]

In response to this new archetype, AKS idled its Kentucky BOF (moved orders to its other two BOFs). [12] Next, it has attempted to move its facilities away from the production of commodity HRC steel towards more specialized “up-stream” value-add services that customize HRC for an end-user. These products have higher margins, quality-focused customers, less import competition, and lower price volatility. Additionally, AKS has been spending R&D with goal to shift certain products from their BOFs to their EAFs, which have more production flexibility. [13]

While I agree with these steps, I believe AKS must go further. While difficult to admit, I believe BOFs are no longer economically viable given the US’s relative access to feedstocks and high labor costs. These plants are over 100 years old with structural disadvantages versus modern facilities, and AKS should not rely on protectionism to achieve profitability. Rather than keeping the Kentucky BOF idled with the hopes of eventually restarting it, I would permanently shutter all facilities that cannot be converted to downstream. I would then move as much production as possible to the remaining EAFs, with the hopes of consolidating into one BOF, downstream facilities, and EAFs. With this portfolio, AKS could actually benefit from cheap HRC imports, which could be used as feedstocks into the EAF and value-add processes.

While outstanding questions need to be addressed – such as evaluating the viability / social impact of closing the BOFs and ensuring customers will purchase EAF products – the bottom line is AKS must transition to the new reality before it is too late.

That’s Off the Chain – AWS Today vs. Decentralized Cloud Storage

All Digital at ALDI: Fast Times in Supermarket Tech

Student comments on AK Steel: Casualty of a Protectionist War with No Winner in Sight