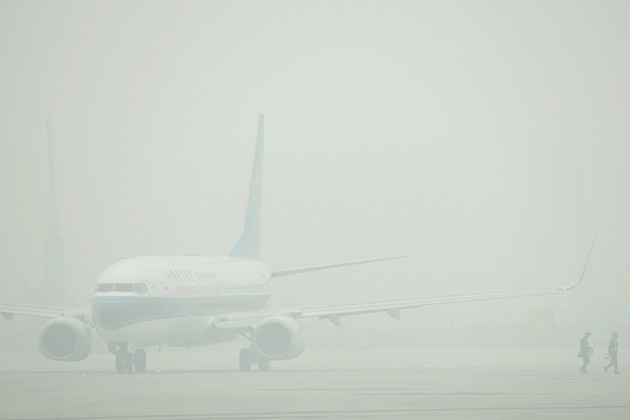 Contribution of the global aviation industry to climate change accounts for 2% of total manmade CO2 emissions, six times less than road transport4, but still a sizeable contribution coming from a relatively small industry. That share is projected to grow in the coming years, contrasting with the constant innovation in fuel efficiency that manufacturers have carried out since the 60s. Back then, the main goal was to reduce the impact that fuel price and its volatility have on the airlines’ P&L. However, fuel expenditures still account for a third of the operating costs of airlines3, and are listed as one of the major hurdles in their struggle for profitability.

The sector has already committed to reducing impact in a considerable way by laying out a roadmap for the next 40 years: manufacturers have agreed to improve fleet fuel efficiency by 1.5%, effectively stabilizing net carbon emissions by 2020. By 2050, net aviation carbon emissions are projected to be half of what they were in 20054.

Aggressive targets, coupled with new regulatory systems that include the EU emissions ‘cap and trade’ system5, will create a market of over US$1 trillion, as airlines renew their fleet to the tune of 12,000 new aircraft to comply4.

Yet while air transportation is set for strong growth in the foreseeable future, public perception calls for a revolution within the industry: it’s no longer about reducing the size of the problem, it’s about being an active part of the solution.

In October 2012, Hurricane Sandy cost airlines an estimated US$0.5bn in revenues6. While weather events like hurricanes and winter storms are the most obvious consequence of climate change to the aviation industry, subtler occurrences are already worrying some analysts. The increase in turbulence and change in the jet stream7 might challenge flight times, safety, and ultimately impact the bottom line due to an increase in fuel expenditures. Revenues might also be in danger due to higher temperatures, as warmer weather inhibits the plane’s lift and might add some restrictions to the passenger and cargo payload8.

While airlines have been footing the climate change bill so far, we can anticipate market pressure for manufacturers to deliver new innovative systems and aircraft that shortcut the abovementioned challenges. In our minds, one thing is clear: in the innovation challenge that is ahead of us, the winner takes it all.

Future by Airbus: a roadmap for the first half of the century 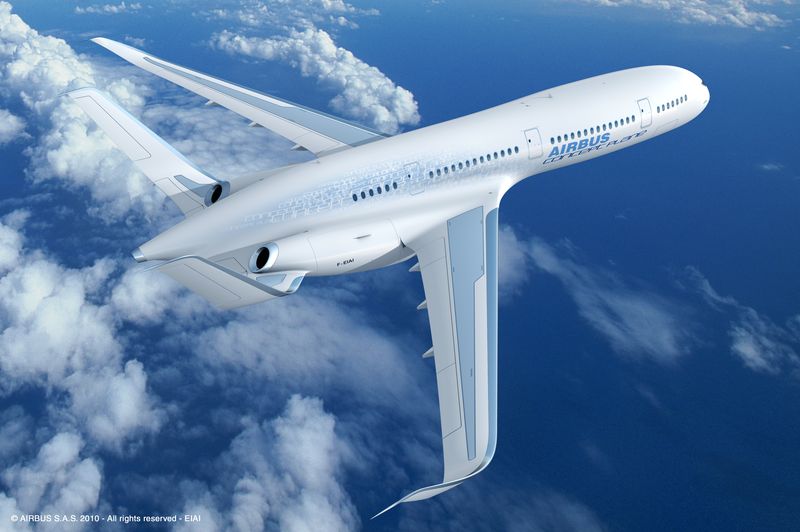 With new competition coming from China and oil prices not likely to remain at its current levels, the two main aircraft manufacturers are set for a bumpy ride in the next 40+ years.

Airbus wants to get ahead and has already set a roadmap for its innovation efforts: in 2010, the company launched ‘Future by Airbus’10, a report in which they outlined their vision for the future.

Some steps of the roadmap have already been achieved: in 2011, Airbus launched its eco-partnerships11 with key industry shareholders such as airlines (Air France, Air Canada, British Airways), airports (Heathrow) and navigation providers around the world. As an example, Airbus partnered with Air France to accomplish the so-called ‘perfect flight’, saving up to 50% in fuel by combining the use of sustainable fuels (e.g. cooking oil), optimized air traffic management and ground operations. The company has also been measuring ozone levels on its in-service aircrafts and providing the data to the scientific community (Project MOZAIC) since the 90s.

The additional steps to complement Airbus’ plan have one thing in common: collaboration. In the new highly interconnected world, crowdsourcing efforts to complement in-house R&D are key to driving innovation and challenging preconceived ideas. Universities, start-ups, scientific organizations and complementary industries will be invaluable in setting a new standard for the future.

We envision this collaboration in different ways: from acquisition of new relevant start-ups in the cleantech sector and joint ventures with industry leaders, to greater interconnectivity among leading universities in the world.

Stakes are sky-high to solve humanity’s most pressing problem and with over 3bn minds12 connected to the same network, we have never been better positioned to change the course.

Hershey’s Chocolate: Has Climate Change Made It Bittersweet?

4 thoughts on “Airbus Group: Fasten your seatbelts, it’s going to be a bumpy century.”