“Industry 4.0” describes the fourth industrial revolution (Exhibit 1) in which machinery no longer simply processes a product, but in which the new capabilities of smart, connected machines are reshaping the operations of manufacturing plants, leading to fully automatized and optimized production processes (“Smart factory”) [1] [2]. The concept originated in Germany in 2010 as part of the government’s High-Tech Strategy 2020 Action Plan, with similar applications having emerged globally (e.g. “Smart manufacturing” in the US). 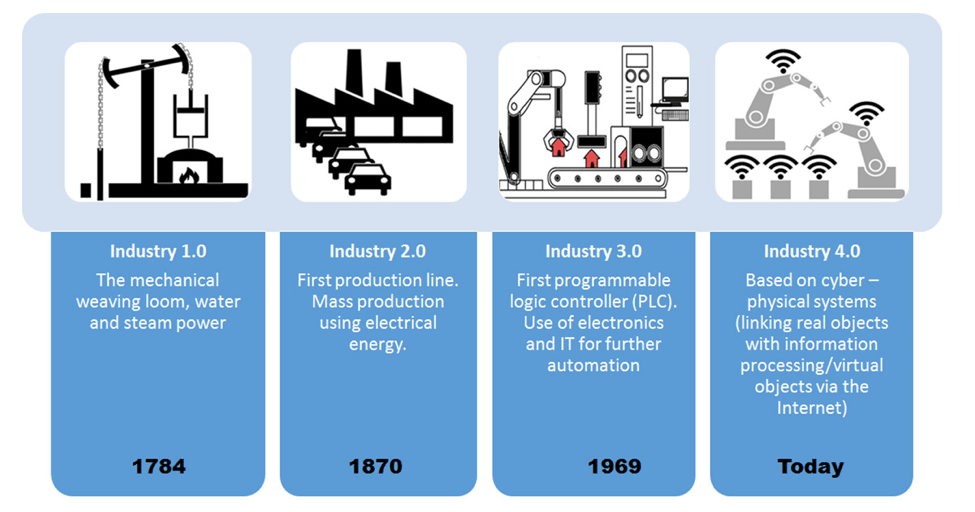 Implications of Industry 4.0 for Adidas – Transformational challenges ahead

As the application of Industry 4.0 and the underlying digitalization of supply chains is transforming competition and manufacturers [2] [4], traditional retailers such as Adidas face the challenge of adjusting their value chain and production processes to sustain competitive edge. Due to the scope of innovation, companies failing to adapt to this megatrend are expected to miss out on significant operational and cost efficiency gains in the short to medium term. McKinsey estimates that the potential impact of Industry 4.0 innovations on a company’s supply chain could result in up to 30% lower operational costs, 75% fewer lost sales1, and a decrease in inventories of up to 75%, partially driven by a shift from push production (“make and build up inventory”) to a pull production (“make to order”) [5] [6].

The effects of digitalization ultimately lead to a new economic rationale: Whereas historically, an automatized industry with low asset turnover and high margin (1) was able to offer the same ROCE as an industry with high asset turnover and low margin (2)2, Industry 4.0 represents a paradigm shift as the combination of increased profitability and asset efficiency structurally pushes ROCE to higher levels (3) (Exhibit 2).

Exhibit 2. The effects of Industry 4.0 on return on capital employed (ROCE) [5]. 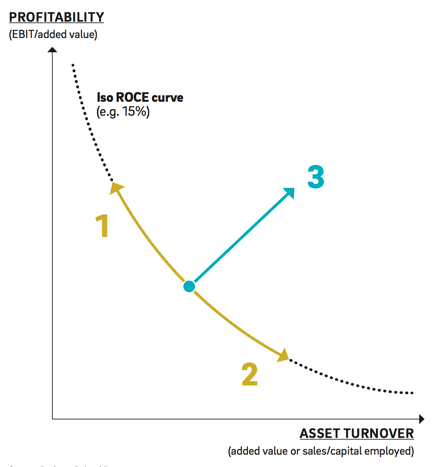 Former Adidas CEO Herbert Hainer (who was succeeded by Kasper Rorsted in October 2016) identified early on that “(…) [fully automated factories] will revolutionize the whole part of manufacturing in the sporting goods industry” [7], recognizing that the successful adoption of this new form of production represents a critical success factor for Adidas in the future.

A new manufacturing era at Adidas – The Speedfactory

Adidas represents one of the early adopters of the “smart factory” concept in the retail environment, in an effort to maintain a competitive advantage through manufacturing bespoke sports shoes at closer proximity to its customers. On December 9, 2015, the company revealed its plan to launch an automated, decentralized and highly flexible manufacturing facility based on intelligent robotic technology and additive manufacturing (“Speedfactory”) that allows to create high-performance sports shoes faster and more flexibly than ever before [8]. Compared to the formerly 18-month time lapse between the design of new models and their arrival in stores, the Speedfactory enables to process new collections in less than 45 days [5]. Instead of manufacturing components across different plants in Asia, with workers assembling components and sewing materials, the Speedfactory will instead create most parts itself from raw materials (e.g. plastics, fibres) and subsequently produce the goods [9]. In line with customers’ increasing appetite for individualized products and aversion for long production times, the new system enables mass customization and the ability to flexibly react to demand variations, making traditional retooling of conventional machines obsolete [5]. Adidas first Speedfactory is based in Ansbach, Germany. In the medium term, Adidas plans to roll-out additional Speedfactories, e.g. near Atlanta, USA.

Huge opportunity, yet at an early stage

With a target production volume of c.500k trainers per year, the overall impact of the Speedfactory on Adidas’ total manufacturing capacity of c.300m pairs of sports shoes remains limited [9]. In order to capture the benefits of Industry 4.0 in the near to medium term, Adidas needs to roll-out its Speedfactory across multiple locations and markets and replicate the concept for additional product categories (e.g. sports apparel). Adidas should also focus on further increasing the speed-to-market through directly connecting customer orders with its smart manufacturing plants. In the future, a customer should be able to order a customized/personalized product online, triggering the immediate “on-demand” production of respective product in the Speedfactory, followed by same-day delivery to the customer’s home.

As Adidas transitions into a radically different manufacturing process, digitalization is set to disrupt Adidas’ existing value chain in Emerging markets (e.g. China, Indonesia, Vietnam). In the long term, the shift from traditional manufacturing labor to automatized robotics is likely to make a large number of employees in these countries obsolete. How will Adidas manage this transition phase, also in the light of the company’s social responsibility for the people it currently employs? Given the increased vulnerability of connected machines to e.g. cyber attacks, how can Adidas successfully protect itself from such external threats?

2 Note: All points on the curve represent an equal ROCE of 15% (exemplary), indicating the mutual effect of profitability and capital efficiency on ROCE

Amazon: A role model for supply chain innovation in the wake of digitalization