In 2014, air transport was responsible for generating 724 million tonnes of CO2 1.  CO2 and other greenhouse gas (GHG) emissions have been sighted by scientists around the world as a primary cause of global warming.  Although the airline industry makes up only 2% of the yearly CO2 emissions generated by human activity1, the industry is still under pressure to reduce their environmental impact.  The most obvious way to reduce CO2 emissions in aviation, is to improve the fuel efficiency of jet engines.  Improving fuel efficiency has been a target for the airline industry since the inception of jet engine technology, but in recent years, improvement in engine fuel consumption have started to level off (See Figure 1).  The “Global Transport Sector Climate Action Framework” issued in 2008, stated that the aviation industry was aiming to improve fuel efficiency by an average of 1.5% per year from 2009 to 20201.  Although this goal indicates progress within the aerospace industry, it will take a truly disruptive technology to take the next huge leap forward in jet engine efficiency.  Additive manufacturing is that technology, and General Electric (GE) Aviation is leading the way in applying this revolutionary new manufacturing method to aerospace. 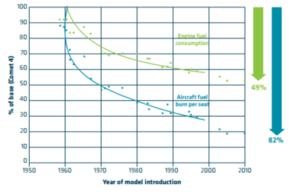 Jet engines are incredible feats of science.  The fuel inside a jet engine burns at up to 2000°C which is above the melting point of the alloy used to make the surrounding components.  To keep the engine from melting, jet engine component designs often incorporate very complex cooling passage geometries.  Complex geometries, tight tolerances, and very strict material property requirements traditionally limited the manufacturing methods for these components to a combination of casting, forging, and machining.  Although advances in the technology supporting these manufacturing methods have led to incremental improvements in jet engine design and efficiency over the last several years, additive manufacturing has the potential to disrupt this entire industry, and set a new course for the future of jet engines.

GE’s leadership team has seen the potential of additive manufacturing and radically changed the way that GE aviation is operating.  Huge investments have been made in developing 3D printing technology throughout GE’s aviation business unit.  In April of 2016, GE opened its $40 million Center for Additive Technology Advancement (CATA) which will focus on further developing this new technology 4, but even before this investment, GE’s engineers were pushing the limits of additive manufacturing.  Just this year, GE could use a form of additive manufacturing called Direct Metal Laster Melting (DMLM) to print a miniature jet engine that ran at 33,000 RPM 3.  DMLM uses a focused laser to build up a component through a series of welds.  This technique provides several key advantages over traditional manufacturing.  The first is that it allows for the creation of very complex geometries.  Traditional manufacturing methods are limited by the capabilities of tools like dies and machining equipment, but DMLM does not have any of these limitations which allows GE to create single piece components instead of welding many different components together. 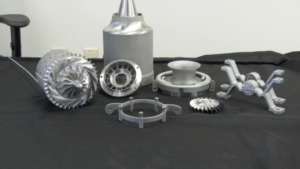 Source: These Engineers 3D Printed a Mini Jet Engine, Then Took It to 33,000 RPM

The CFM LEAP engine that GE and Snecma are launching this year will be the debut some of the first fuel nozzles to be produced using additive manufacturing.  These nozzles will be 25% lighter and 5 times stronger than the previous versions of the same component.  This, combined with other enhancements, will allow the LEAP engine to deliver a 15% fuel consumption improvement when compared to CFM56 engines.  If this magnitude of savings can be delivered with just one component, imagine the potential that this technology will have for the future!

Figure 3: A 3D-printed fuel nozzle for the LEAP 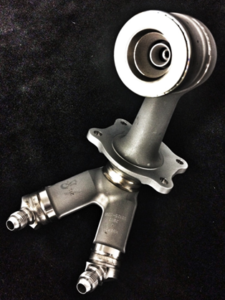 Source: The FAA Cleared the First 3D Printed Part to Fly in a Commercial Jet Engine from GE

The addition of additive manufacturing to the aerospace industry will also significantly disrupt the existing supply chain.  Casting and Forging require both expertise and a massive capital investment in equipment.  As a result, most engine manufacturers obtain some components from upstream casting and forging houses.  If the same components can be made through additive manufacturing engine manufacturers might be able to bring more component production in-house shortening lead times and product development cycle times significantly.

Aerospace companies have barely scratched the surface of the benefits that additive manufacturing will bring to the industry, but this revolutionary technology is already prompting companies like GE to change where they invest their R&D budget, in hopes of discovering the next big breakthrough in aviation fuel efficiency.  With the constant threat of climate change and increased regulation companies like GE need to double down on investment in radical technologies like additive manufacturing in order to stay ahead of the curve. [Word Count 748]

When your product is dependent on snow, how do you react to climate change? A look at Vail Resorts.