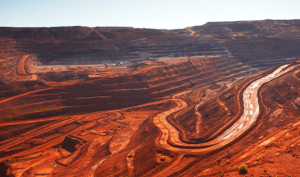 When people hear the phrases “mining company” and “climate change” in the same sentence, the connotation is hardly ever positive. The industry has come under a lot of scrutiny lately due to increasing public awareness about the environmental impacts that it inherently has generated. However, it would be wrong to only look at the negatives without looking at the role mining companies play in the world. In Australia, the mining industry has substantially increased living standards. The Reserve Bank of Australia estimated that by 2013, the mining  had raised real per capita household disposable income by 13%, raised real wages by 6 per cent and lowered the unemployment rate by about 1.25%, which equates to around 150,000 jobs (Peter Downes, n.d.).

Impacts to the mining industry from a changing climate

Recent extreme weather events in Australia have highlighted the vulnerability of the mining sector to climate change. In 2010 and 2011, destructive flooding events in Queensland affected many mining operations as pits flooded and transport routes were closed. The financial cost to the coal sector was estimated at between $AUD 5 Billion and $AUD 9 Billion (Barton Loechel, 2013). Some particular characteristics of the mining and metals industry may increase the industry’s exposure to climate change (International Council on Mining & Metals (ICMM), 2013):

Under a changing climate, mining companies will also face an increased risk of stringent policies and regulations aimed at controlling Green House Gas (GHG) emissions, which could affect companies’ competitiveness (International Council on Mining & Metals (ICMM), 2013). This is particularly important in the current economic climate, with falling commodity prices and as growth in China slows down to more sustainable levels.

One of the biggest players in the Australian mining industry, BHP Billiton, has publicly accepted IPCC’s assessment of climate change science and has committed to taking the following (key) actions on climate change.

Reducing operational emissions: The company has been setting GHG emissions targets since 1996 (BHP Billiton, 2016). The current target is to keep absolute FY2017 emissions below the FY2006 baseline. As per Figure 1, BHP Billiton’s GHG emissions have been consistently below target for the past 6 years. 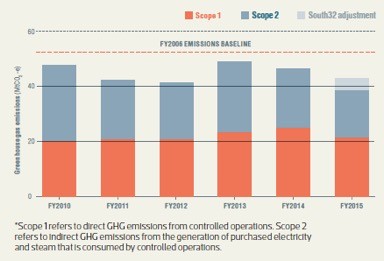 Building resilience: Analysis has shown that one of the physical impacts of climate change could be an increase in cyclone intensity in the Pilbara region, affecting all of Western Australia Iron Ore operations. Mitigating this risk will require adaptive management practices and robust cyclone management processes (BHP Billiton, 2016).

What more can BHP Billiton do?

While BHP Billiton have taken a lot of proactive measures to combat climate change, I believe that they can do a lot more. For one, the GHG targets are too high. The company has been coming under target for their GHG emissions for more than 5 years. I believe it’s time to set a more ambitious target to encourage even lower emissions. Secondly, the company talks about technologies that can reduce their emissions and yet are not focusing on them. Instead, they are working with their downstream partners to reduce their emissions. I question how much control BHP Billiton will actually have on these other partners and think that they can be more proactive around reducing their own emissions at the same time. Lastly, in 2013, BHP Billiton supported the Abbot government on its legislation rescinding Australia’s commitment to a carbon price (Mehra, 2013). If they are serious about working with a broad range of stakeholders to combat climate change (BHP Billiton, 2016), they will need to be front-runners in this area and lead by example.

A World without Hershey Kisses?

Student comments on Adapting to climate change: Implications for a mining giant