Have you ever lost a full morning or afternoon waiting on a line to be attended? Or finally, when your turn is coming you must leave and you lose your position? Or have you tried to use your waiting time in something else and by the time you come back the line already passed your number and you must start all over again? Probably you have experienced this just like two Chilean entrepreneurs who suffered it and decided to develop Sáltala, a mobile app that allows you to pick from your smartphone a number to be attended on the services that work on a first-come-first-served basis. Currently the app is running a pilot in the pharmacy of one hospital in Santiago, has been downloaded over 1.500 times, and accumulates over 25.000 usages and positive reactions from the users. 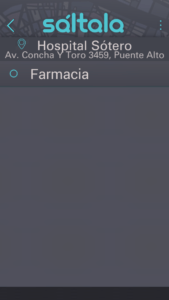 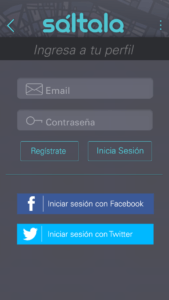 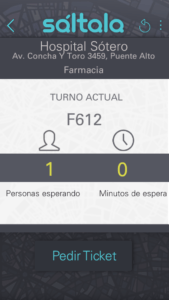 The app not only benefits users by allowing them to pick up their ticket from anywhere they want, it also has additional benefits:

The main benefit of this service is the positive externality it generates to the users, unlocking their time and allowing them to use it in other more productive ways. As explained by the two founders[1], “the service doesn’t intend to shorten the waiting time or the length of the lines but rather to improve the waiting experience making it more pleasant and efficient”. In the hospital’s case the fact of removing the sick patients from the waiting rooms generates another positive externality which is the fact that less patients will spread their diseases to the other patients on the waiting room, which critical during the winter season.

Sáltala in the Public Sector

The main challenge for the company is to convince the public authorities to adapt their systems to introduce this technology that won’t benefit their services directly. Especially considering the natural resistance, the budget constraints, the bureaucracy and the lack of incentives of public services to introduce new technologies or improvements to the customer experience.

From my point of view, the correct implementation could result in a complete turnaround of the opinion that most Chileans have from public services, which are commonly seen as inefficient and run by people with no focus on the users.

Sáltala in the Private Sector

For the private sector this app creates an enormous opportunity to improve the quality of the service that is being given to their customers on their physical channels. But what seems more interesting to me is the fact that it can become a game changer on the dispute for customers between brick and mortar and online channels. Convenience is the main reason why customers decide to buy online instead of physical stores, therefore reducing the timing required to make a purchase on a physical store could turn the scale to the brick and mortar side.

On the other hand, in some cases it could be seen as a threat for some business that use the waiting time in their waiting rooms for other purposes such as to educate consumers about their products (bank), make some cross selling (retail stores) or to increase the demand for their products (fast food restaurants). Given this, it’s important to understand the role that waiting time plays in the customer experience and if there is some benefit being created in that part of the experience, removing it should be carefully considered.

Student comments on A world with no waiting rooms?