Since opening its first school in 2009, Bridge International Academies (Bridge) has become Africa’s largest school chain, serving 100K+ students in 400+ schools across Kenya, Uganda, and Nigeria. A for-profit, Bridge says its schools cost an average of $6 per pupil per mont 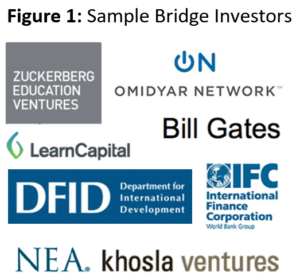 Bridge claims to provide the equivalent of 32% more schooling in English and 13% more schooling in math in one year.[ii]  In addition, it has raised $100M+ from big-name investors (see Figure 1)[iii] and won accolades from OPIC’s Development Impact Award to The Economist’s Social and Economic Innovation Award.[iv] So what has contributed to Bridge’s success? Most significantly, its unique, technology-enabled approach.

Content Development and Distribution: Thanks to technology, Bridge content can be developed and standardized remotely. Experts from local countries and Cambridge, MA work together to develop Bridge’s curricula, which are based on government standards. Lesson plans (teacher scripts) and assessments are then pushed via internet from a team in the US to Bridge locations halfway around the world.[v] 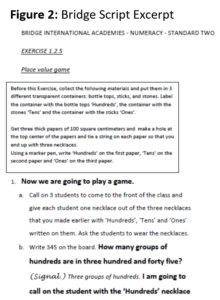 delivery and headquarter insights into classroom data (e.g., lesson pacing).[vi] As shown in Figure 2,[vii] the script is extremely prescriptive – telling teachers exactly what to prepare, say, and do (down to pronunciation and physical gestures)[viii] – and teachers are trained not to deviate from it. In Bridge’s opinion, this ensures a consistent and optimized experience across schools while reducing the burden of lesson planning on teachers, which is particularly important in countries like Kenya where access to high quality teachers is limited.[ix] These tablets also track data such as student attendance and serve as a source of accountability for teachers; if a teacher doesn’t sign into the tablet one day, Bridge can call the teacher to determine why.[x]

Payments: Through its own research, Bridge found that other school managers spent more than half of their time being a “cash register”: collecting tuition, paying teachers, and paying vendors.[xi] Therefore, it decided to make all of its schools “cashless”. Bridge leveraged mobile banking technology (such as M-PESA in Kenya) and centralized relevant functions to automate tuition payments from parents and payroll payments to teachers.

Unfortunately, all that glitters may not be gold. Citing concerns about sanitation, curricula standards, infrastructure, and teacher qualifications, Uganda’s High Court ordered Bridge to close; after losing its appeal earlier this month, Bridge may have to shutter its 63 schools in Uganda, which serve approximately 12K students.[xii] Additionally, many question the fundamentals of Bridge’s model, believing that the poor shouldn’t have to pay for education or that tablet-based teaching strips teachers of necessary autonomy and leads to over-standardization and a lack of individualized student attention. Some also disbelieve Bridge’s data, saying its average price is more than $6 a month and its impact claims (based largely on self-funded studies) are misleading or inaccurate.[xiii]

Going forward, Bridge should use technology to help address these issues, whether that means proving them wrong or accurately identifying the sources of the problems and fixing them. Its existing technology infrastructure and resources can be used to better monitor and identify potential problems and relay information to independent evaluators who can confirm (or discredit) Bridge’s impact claims.

[xiii] Signatory Organizations in Uganda and Kenya, “Just $6 a month?: The World Bank will not end poverty by promoting fee-charging, for-profit schools in Kenya and Uganda”, May 2015, http://globalinitiative-escr.org/wp-content/uploads/sites/4/2015/05/May-2015-Join-statement-reaction-to-WB-statement-on-Bridge-14.05.2015.pdf, accessed November 2016.

Student comments on A Tablet a Day Keeps the Dropouts at Bay: How Bridge Leveraged Tech to Become Africa’s Largest School Chain