Global climate change and its connection to anthropogenic greenhouse gases is gaining widespread awareness, and a usual suspect of blame is the automobile industry. Customers are increasingly valuing vehicles that not only have better performance, safety equipment, and luxury features, but that also have better fuel efficiency. While the connection between driving and the greenhouse effect is visible to drivers, behavior is barely changing due to the premium on renewable energy-based cars and lower oil prices.[1] Frankly, gas guzzling cars still sell well.

As a result, automobile companies are in a dilemma of how to change their production priorities towards fuel efficiency for a relatively weak fuel efficient automobile market.[2] In addition to customer perception, regulation to curb fuel emissions are an added stress to automobile companies. Regulation, in the form of maximum output standards and emission taxes on car producers, limits vehicle CO2 emissions, and other toxic substance emissions such as carbon monoxide (CO), hydrocarbons (HC), and nitrogen oxides (NOX).[3]

General Motors was one of the first car companies to introduce a fuel efficient vehicle. In the late 1990s, the company introduced the option to lease a Chevy EV1, an electric car that was adored by customers.[4] When the company suddenly cancelled EV1 production plans despite strong consumer demand, the press and general public were outraged (EV1 fans even held a candlelight vigil for the car!). Regardless of the real reason why GM cancelled EV1 production, GM received a load of negative press coverage that claimed the company colluded with oil companies and was suppressing electric vehicles from coming to market.[5] As Toyota eventually released the Prius and regulation sought to curb energy inefficiencies, GM, known for Hummer and other large gas guzzlers, was forced to reprove to the press, consumers, advocacy organizations, and the government, that it was ready to embrace sustainability efforts.[6]

In an effort to eradicate company associations with gas guzzling cars and conspiracy theories related to the beloved EV1, GM CEO, Mary Barra, has committed to fuel efficiency in the company’s production line.[7] This effort is publicized through GM’s Chevy Volt, a plug-in battery-operated vehicle. Instead of relying solely on press coverage concerning fuel efficiency and product comparability with competitive companies, GM has decided to reorient emphasis on sustainability towards its production facilities. Barra has put GM at the forefront of climate change press coverage, as she has articulated a strategy for GM to “run entirely on renewable energy by 2050.”[8]

What Does This Mean? 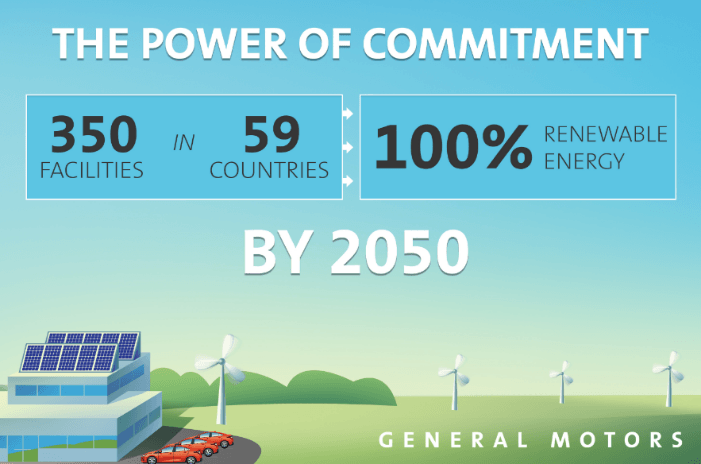 GM runs 350 operations across the globe, and has vowed to generate its electricity solely through renewable sources.[9] Last year, GM used 9 terawatt hours of energy to build its automobiles and supply power to its facilities.[10] The new strategy has provided for lower and more stable energy costs (GM has saved $5 million a year from using renewables), while at the same time, benefiting customers and communities through cleaner air.[11] Currently, the company has already converted 22 of its sites to using solar power and 4 of its sites to using wind as a power source. [12] 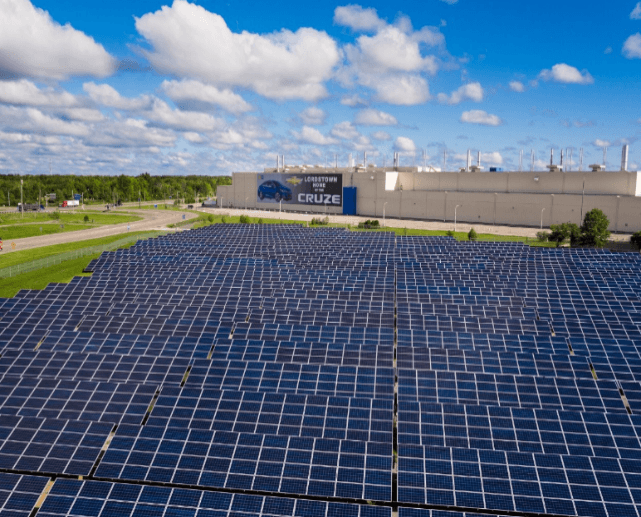 GM has dedicated significant company press coverage to its operational efforts to promote sustainability. The company has also published an extensive sustainability report that is on the United Nations Global Compact website. This report mentions fuel efficiency efforts, but also goes into much detail regarding operational and supply chain environmental changes.[13]

GM has undertaken a bold strategy to put itself at the forefront of operational sustainability efforts in the automobile sector. The company is gaining recognition from the United Nations and various climate change advocates for its new emphasis on operations, however, is this strategy enough to detract focus from its tainted history related to the EV1? [14] Can this operation-based strategy and increased press coverage convince consumers that the company is truly environmentally-conscious while the company continues to remain heavily involved with the production of the quintessential gas guzzling vehicles?

It remains to be seen how many millions of vehicles in GM’s production line are powered by sustainable energy in the coming years.